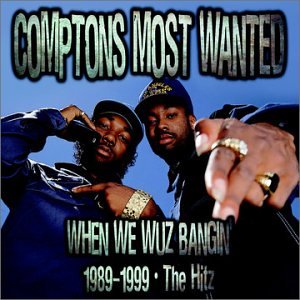 Compton’s Most Wanted :: When We Wuz Bangin’

Over a decade of “Hitz” – that’s what the crew called Compton’s Most Wanted is representing on this album. The crew? Jeahh, in case you had gotten it twisted, the group is bigger than MC Eiht – it also includes The Chill MC, DJ Slip, and Mike T. So if you are confused, don’t feel bad – MC Eiht spent the latter half of the 90’s standing in the spotlight on his own. The album’s comprehensive liner notes pulls no punches on this subject – his solo career outside CMW flagged while the gangsta rap albums from his early days still continue to sell.

As such, it seems a retrospective of what made MC Eiht great is doubly useful. Not only does it illustrate why CMW was one of the most influential gangsta rap groups of their era, but it serves as a road map Eiht can travel back to dopeness. This reviewer is not issuing a opinion on half a decade of MC Eiht solos here – that’s for seperate reviews. Rather it serves worthy to simply say that listening to this album clearly delineates the difference between inspired hardcore dopeness and generically run of the mill rap thugs.

This compilation opens the same way their debut album “It’s a Compton Thang” did in 1990 with the police saga “One Time Gaffled Em Up.” This song has all of the trademark CMW elements: a slow’n’smooth groove, some nice Mike T scratching, and raps that tell a tale of the hood without glorifying the ills that plague it. In fact, Eiht is on the defensive here – having to fight the assumptions of a racist cop with an attitude:

“They peeped out the pager; said, ‘How much did it cost?’
‘By the way, MC Eiht, where’s the dope you tossed?’
Me sell dope? Officer I’m a rap singer
Won’t go down like the Compton gang-banger”

The album continues to reflect the dopeness of their first shot across rap’s bow with three more excellent tracks: “Duck Sick”, “Late Night Hype” and my personal favorite “I’m Wit Dat.” This one has one of Chill’s illest verses, and makes one wonder why Eiht would play him to the side to go solo. Here at least, he is just as dope.

“The lyrics that I bust make you brag and boast
how C.M.W. rocks the fresh West coast
Eiht and Chill, two fresh Afro-Americans
DJ Mike T, is down with me, a good samaritan
Three the hard way, is the way that it goes
Just another dumb victim with a swoll-up nose
Because I’m wit dat..”

When it comes to cuts from their seminal album “Music to Driveby” though the choices are skanless, both for what they include and what they don’t. There’s no question that MC Eiht’s duet with Scarface “N 2 Deep” merited inclusion, but when they added “Def Wish II” they included the (semi-)rare DJ Premier remix instead of the funked out original. I’m serious – even to this day listening to the original version gives me goosebumps. If I was DJ Quik (the target of this vicious assault) I would have been cowering in a closet, waiting for the hit. At only 13 tracks and 58 minutes long it occurs to me they could easily have putboth versions in the mix.

In fact I have to question if this album is too short to really give CMW and Eiht their props. Hip-Hop classics from their second album “Straight Checkn ‘Em” such as “Can I Kill It?” and “Raised in Compton” didn’t even make the cut; not to mention “Driveby” songs such as “Hood Took Me Under” and “Compton 4 Life” were ignored. Why? Heaven only knows. Maybe they should have released a double album – I can’t be happy with how seriously under- represented these two albums are on here. They don’t actually fare much better with the fourth album “We Come Strapped” – the ultra-macked out smoothness of Eiht’s hustling rap “All for the Money” is included, but “Niggas Make the Hood Go Round” and the bi-coastal “Nuthin’ But the Gangsta” featuring Spice-1 and Redman were both overlooked. “All for the Money” is in fact the ONLYinclusion from this LP.

Two dope soundtrack cuts by the Wanted and Eiht save the album from being seriously flawed. “Growin’ Up in the Hood” from the film “Boyz ‘n the Hood” and the equally dope “Streiht Up Menace” from the movie “Menace II Society” are two ill cuts. Also included are the somberly reflective “Days of ’89” and the vicious cut “Automatic” – both culled from MC Eiht’s most recent solo album “Section 8.” Spice 1 also chipped in his MC Eiht duet “1990-Sick” from his album of the same name, but it’s too over the top with Spice’s “kill ’em all – cause everybody dyin on this motherfuckin album” theatrics.

The only track I can’t account for on this whole album is “Whose is It? (Give it Up Pt. II)” which features two very young sounding rappers named Foxy Fox and Broadway. Thanks to a funky (and somewhat overused) break on the instrumental, this one passes the muster. In fact, almost all of this album is on hit musically and lyrically – gangsta rap at it’s finest. Therefore the fact I have to take a few points off on the final score shouldn’t reflect the fact it’s not a dope collection – or that it’s a MUST own for anybody who slept on the skills of Compton’s Most Wanted and MC Eiht. Even the weaker MC Eiht solo albums such as 1997’s “Last Man Standing” still had dope tracks like “Can I Get Mine” – and if tracks from “Section 8” merited inclusion, so did they. So the gripes I have are two-fold: the very first album is almost over-represented, and the rest of the combined Eiht and C.M.W. catalog are seriously UNDER-represented. I can’t forgive not including “Hood Took Me Under” – to me that’s a near fatal mistake. Still, even as a somewhat misguided representation of their entire career, it’s still good enough to buy a copy and kick it in your ride with true Compton G’s.