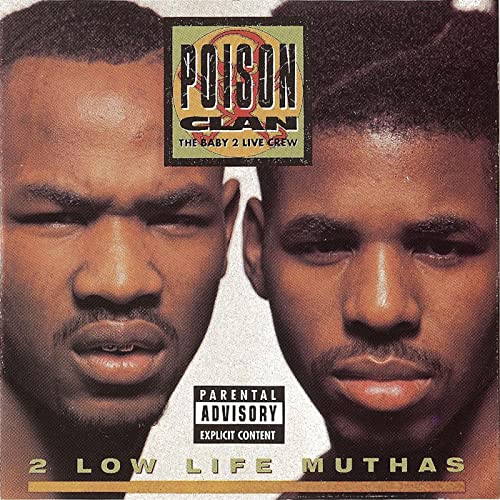 There’s revisionist history going both ways for Poison Clan‘s debut album “2 Low Life Muthas” and group member JT Money in particular. Depending on which entry you read you get a different version of the truth. One says that Poison Clan “had various line-ups” for a five year run on Luke Records, and the other says that JT was the frontman who eventually “dropped the name” to record as a soloist in the late 1990’s. Without any statement from the principals involved there’s no way to know who is right, but I remember being inundated with JT Money’s “Who Dat” when I was watching Rap City daily back in 1999.

It honestly never occurred to me that he was from the Poison Clan because I was never into the Poison Clan. Compact discs were insanely expensive ($18 then = $37 now) so I wasn’t about to risk the money on a group I only knew of through being signed to 2 Live Crew’s label. Allegedly “The Bitch That I Hate” was released as a single, but it’s hard to imagine a clean edit could get radio play, and I haven’t found a music video for it.

The only song from the album that seems to have crossed over is not nearly as good. “Dance All Night” rocks the same “Theme From Shaft” that Young MC did for “Know How,” and even though the latter wasn’t released as a single it’s undeniably a better song. Young MC was an unapologetically radio friendly rapper and like Fresh Prince sounded natural doing it. For these rough and tumble rappers who spend a whole album rapping about bitches and hoes to try to do a dance track is… well… COMICAL.

One thing is clear from listening to this version of JT Money and his tag team partner Debonaire — they were trying very hard to be a “Bad Influence” on the youth. This was a recurring problem for rappers in the early 1990’s who saw how successfully acts like Public Enemy, N.W.A and 2 Live Crew had become. Let’s call it the “shock rap” genre for lack of a better term. Everybody thought being as crass as possible was the way to become the next big star, and being signed to 2 Live Crew’s label and produced entirely by Mr. Mixx ensured they wouldn’t be the ones to buck this trend.

“Ain’t shit illegal until you get caught” brags JT, sounding almost nothing like the second incarnation of his career a decade later. Were it not for the references linking the two together I wouldn’t believe it was the same guy. And speaking of links you’d never make, hearing Poison Clan’s “Spoiled Rotten” instantly made me think of Chubb Rock’s “Just the Two of Us.” As with Young MC I already know who sampled it better, and in this cage fight Hitman Howie Tee defeats Mr. Mixx by first round TKO.

“2 Low Life Muthas” has an originality problem and it’s a shame, because JT Money and Debonaire aren’t actually bad rappers. In fact some people might have unfairly lowered the bar given that 2 Live Crew were known for filthy sexual raps, and being signed to Luther Campbell’s label and produced by his favorite producer ensured they’d be paint brushed with broad strokes. Even when they’re rocking familiar beats and breaks, the actual talent shines through on tracks like “Neighborhood Haps.” You can clearly see the influence of songs like “Boyz-n-the-Hood” and “Dopeman” here, but give them the credit they’re due for doing it well.

The truth is if I had spent the $18 on “2 Low Life Muthas” back when my pockets were much leaner, I don’t think I would have regretted the purchase. The things that standout about copycat shock rap acts in hindsight wouldn’t have been nearly so obvious to a teenage Flash. I wouldn’t go so far as to call Poison Clan’s debut album a hip-hop classic, particularly given a level of misogyny that would even make Too $hort cringe, but I won’t deny that Mr. Mixx made competent tracks or that both rappers were good at their craft. I think the most interesting thing about Poison Clan is that even though they were signed to an infamous label and wanted to be as famous as they were, Uncle Luke didn’t force them to be a strictly Miami Bass titties in your face group, and as such the album works.