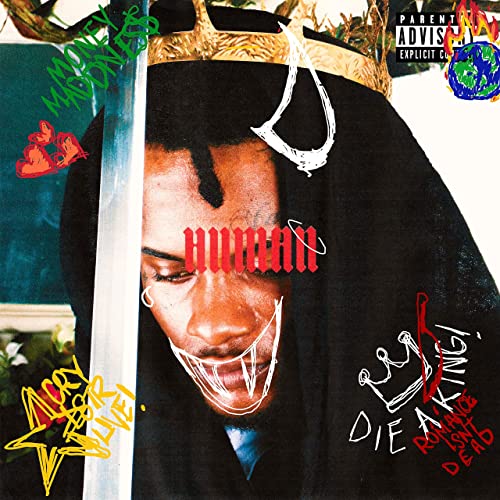 Six months after the release of “Assume the Worst” BIGBABYGUCCI is back with a brand new album called “Human.” He’s certainly right about that. We’re all human — unless you happen to believe you’re an alien wearing an Edgar suit. Sometimes that’s how I feel trying to understand the changes in rap music over the years. When I have those moments it helps to remind myself that KRS-One once opined “old school artists don’t always burn […] now it’s my turn” at a time when commercial rap music wasn’t even a decade old. Rap changed so fast that Kris had already drawn a line in the sand between his rap and “old” rap. “Old school” came to mean anything pre-1985, but that dividing line has been moving forward ever since.

“In the foreign nigga, get out my way/Why would I give a fuck ’bout what a bitch say?/These bitches gettin hеated on they lunch break/I nеver wanted her in the first place.” Rap music may keep evolving, but misogyny never changes, nor does substance abuse. “Percocets4Pain” has plenty of both. The lines quoted would be hard to overlook since the song barely has more than one verse and keeps repeating it over and over. At the moment you start to compliment a rapper for having a song longer than 120 seconds and you realize he only wrote 45 seconds worth of material, you reluctantly have to withdraw said praise.

“S.E.N.S.I.T.I.V.E.” is not what you’d think from the title. GUCCI hasn’t changed his ways on the track – he’s spelling out letter by letter what a woman said to him and promptly ignored. His attitude is so deeply rooted that he happily calls his rivals “pussy niggaz” as though there’s nothing worse in the world. “I just got spotted outside with yo’ bitch.” In that one sentence he’s both described women as something men “own” as though she is either “mine” or “yours,” and in the same breath casually dismissed her value as being no more than a dog to him. This sort of loose lipped woman-hating isn’t original or even unexpected though — it’s an attitude that has run casually throughout the rap game going all the way back to the 1980’s. Some artists are just more brazen about it than others and it’s remarkable how clearly it stands out even with these AutoTuned lyrics.

“Late Night Voicemail” proves it’s no accident. Even when the tuning goes away and a more traditional rap flow moves to the forefront, GUCCI drops lines like “had to tell a bitch her shit stank” and “can’t let a bitch know where I live” cause “these hoes be sneaky.” It’s just relentlessly negative. If you purposefully try to pay no attention to it, the rest of his bars are about how much money he’s making, how he doesn’t fuck with other rappers, and the amount of bullets that will fly your way if you try to take what’s his.

“1000 Blunts” seemed like a chance to change the vibe and do an ode to getting smoked out. It’s not. “Feel like Jackie Chan, she wanna kick but I can’t rush nowhere/These bitches COVID sick about this dick, she don’t touch no one else.” That’s gross but I get the point — you’re a sexy stud and every woman you see wants the D. I think I would have preferred a song about getting higher than Redman and Wiz Khalifa combined, but if we’ve learned anything about “Human” at this point it’s that song titles have no relation to their topic matter. They might get referenced in the lyrics to make it appear they’re related… but don’t fool yourself.

BIGBABYGUCCI is a product of his times, an ultimate narcissist who cares only about himself and will “grab ’em by the pussy” whenever he feels like it. If his rap career continues to climb it’s because nobody really cares what he says and only vibes to the sound of his singing and the beats behind them. I wish I could say the words are meaningless, but they codify a pretty negative mindset as being normal. I wish there was some humor or creativity to it. Even casually misogynistic rappers like Too $hort turn the tables once in a while and have women get the better of men, or at the very least he’s self-aware enough to mock himself as the rapper who made a living saying “bitch” a lot. I can call BIGBABYGUCCI slick and polished, but I can’t call him funny or self-aware.