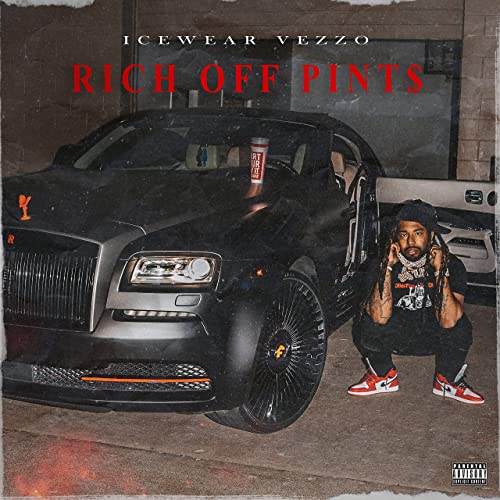 “In Detroit, it get hot as hell, but it keeps snowing”

Having slowly crept his way to notoriety throughout the 2010’s, Detroit rapper Icewear Vezzo is looking to take things to another level in 2021 with “Rich Off Pints.” He started his career with some Minnesota based family called the Green Guyz, but I admit to not being familiar with their work there or when Vezzo established a faction of the same crew closer to home. I only know him from his solo work, where I was immediately struck by his raspy rap delivery over the booming Max Beats bass of “Choppy Talk.”

“I’m a lean sipping, pill popping, dread headed, real rasta” vows Vezzo in the opening bars, before rewinding his own song and starting the verse again. A deeper examination reveals a slew of tropes for gangster rappers in or outside of the D. “Try to rob me? We whack his momma” and “Pussy ass nigga, get out the club if youse a coward” are just a couple of choice examples. He flashes the VVS diamonds in his watch at any opportunity, and if that fails to bring him the respect he demands he leaves you with “I ain’t even got nothing else to say.” Fair enough.

That makes a song like “Fucc the Clout” a curious inclusion. Icewear Vezzo’s name states his purpose before you even hear him spit — he wears ice and he wants you to know it. Why wear ice? You wear it to show you can afford it. It’s all about the clout. You want people to know you’ve made it to the top. This doesn’t bring Vezzo the satisfaction you’d expect though. On the accurately titled “Venting” he makes his displeasure clear: “A lot of shit been on my mind, I feel like venting/A bunch of real issues, some other shit I can not mention/Outside of that, the way this jewelry hit, this shit look sickening/Upgraded my ice, take off my chain, I might go swimming.”

Thus we have the existential conflict of Vezzo — a man whose reputation is based on how icey he is, who wants to show it off at the drop of a dime, but having reached a plateau where he can afford to do so doesn’t give him the satisfaction you’d expect. It might be that staying so iced out causes more negatives than positives — making him a target for anybody who wants to make a quick come up by snatching his jewels. On top of that it’s a never ending cycle of oneupmanship to stay more iced out than the rest of the rap game. Once you start the “Bling Bling” life, you have to keep buying more and more expensive jewelry, constantly proving you can walk it like you talk it. It’s no wonder he seems exasperated by the trap he’s made himself.

“When you up, they try to pull you down like flying kites.” Vezzo’s venting again on “That’s It” and I don’t blame him, but I’m not sure if/when/where it will end for him any time soon. V was already in this game for nearly a decade before “Rich Off Pints” and if this album hits big then he’ll just have to up his conspicuous consumption all over again. It’s not my intention to make this an anti-capitalism rant. We all live in a global economy that’s almost impossible to divorce yourself from. “Go Amish” if you like but I’d rather not give up my cell phone or my television, thank you very much. When Vezzo says things like “I can show you how to hustle, nigga grind right/Bet everything fall in place when the time right” I can only assume he’s looking for a way to redirect his energy. If being so icey isn’t satisfying, maybe teaching people how to rise up from meager circumstances to live a better life would be. For now Vezzo has to keep up his image, but I sense there’s more to him than the posture that he takes.