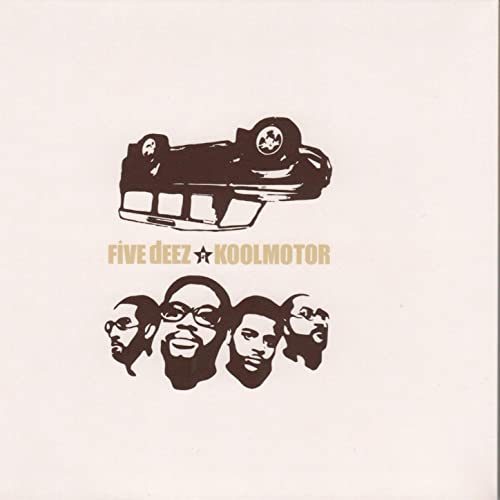 “(Hey!) You can call me on your mobile phone
or grab a pen, a sheet of paper, write a letter at your home
You can download my music off an internet site
or you can be mixtaping it, we’ll still be creating it” – Fat Jon

Five Deez came together at Walnut Hills High School in Cincinnati when they were still coming of age. At a time when a lot of us are thinking more about hitting skins and drinking brews (although at that age I had plenty of experience with one and none at the other), these kids had the presence of mind to coalesce into a hip-hop collective for the purpose of making music. The members are Pase Rock, Kyle David, Fat Jon and Sonic. You might be confused right now because their name is FIVE and there are only four people in the crew. The reason is simple — they originally wanted to be called “Fifth Dimension” to show they were beyond even the third or fourth, but since there was already a group with that name they shortened it.

Nearly a decade of perfecting their craft went into the creation of “Koolmotor,” which released just over 19 years ago on Counterflow Recordings. Like the label itself it’s possible you’ve never heard of Five Deez, and I have no problem attributing that to a regional bias that overlooks ‘Natti. Odds are if you think of Ohio it’s Cleveland that comes to mind — the Bone Thugs collective in particular. Despite being just as substantial of an urban metropolis, with their own major league team and hip-hop scene, albums like Mood’s “Doom” have toiled in obscure “hidden gem” status. Even breakout groups like Tanya Morgan had to link ‘Natti to Brooklyn to get broader recognition from the masses.

Listening to the first official full length album from Five Deez, I can only imagine the buzz this group would have had if they were from Inglewood, Bed-Stuy or Houston. Even instrumental tracks like “Even” produced by Fat Jon (as are a majority of their songs) are just smooth head nodding joints. I could put “Afghanistan Dan’s Skating Stand” on loop for an hour and not be mad about it. I don’t even know what that title is supposed to mean and couldn’t care less. The snare hits are sharp, the background melody is lovely, the scratching is fresh and it’s a pure head nodding jam.

“Koolmotor” could have gone down like that, nothing more than Fat Jon showing off how dope he is behind the boards, but the old school style introduction of “Plasma Avenue” sets up a sudden shift to all the members flowing to a scratchy beat backdrop and Spanish guitar. If you profess to be a fan of “dirty” early Wu-Tang Clan records, you’d have a hard time denying that this is just as fresh. Their love of “spots” from the liquor store to the record store shines through the grime.

I don’t pretend to believe writing this review will suddenly launch Five Deez out of obscurity, and I doubt it would change much if it did since their last collective album was in 2008. Fat Jon moved to Germany and may now be better known for scoring the Samurai Champloo anime and respective soundtrack among other things. Pase Rock, Kyle David and Sonic have all been doing their own projects as well — some in collaboration with Jon and some on their own. To me “Koolmotor” feels like that brief moment in time when the group as a whole released that IT album, the one they were sure would change everything, and when it didn’t their dream slowly died. That’s a depressing note to end a review on right? So hey let’s flip the script and say this — at least this album is a testament to what COULD’VE been.