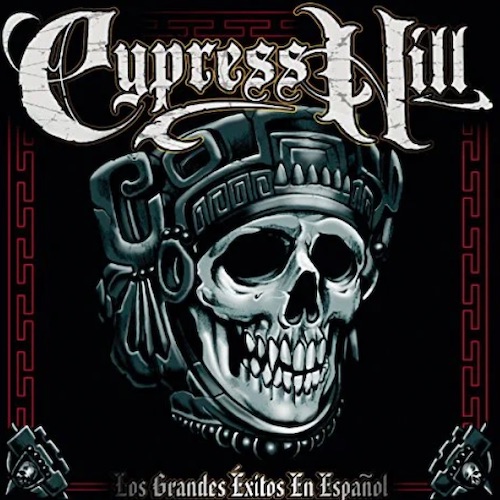 In high school I took a copy of the self-titled debut album from Cypress Hill to my Spanish language teacher, put it in the tape player on his desk, and asked him if he’d translate “Tres Equis” for me. I think you can already guess that I was being a smart-ass. I wasn’t fluent in the language by any means, but you don’t have to be a scholar to know the song title translates to “XXX” or that the lyrics were inappropriate for a school setting. To my surprise though he played along! He listened to the entire song, smiled at me and said, “No Esteban. No.” He laughed, I laughed. It’s one of the few good memories I have from high school. It genuinely brings a tear to my eye thinking about it. Good times. Señor Fallon was a cool guy.

“Los Grandes Éxitos en Español” is what Cypress Hill’s career would have been like if every song had been rapped in Spanish. There were occasional songs that crossed over between both Spanish and English like “Latin Lingo” (which is included here), but for the most part B-Real and Sen Dog rapped to garner a gringo audience. I’m certainly not mad about it, but the culture that bled through the raps was just as intoxicating as their clouds of marihuana smoke. As someone who still only has a passing knowledge of Spanish despite my teacher’s best efforts (enough to watch lucha libre, order a beer or ask where the bathroom is) I appreciate hearing Cypress Hill revisit some of my favorite songs to rap them in Spanish.

If you’re a dedicated fan of the Hill, you could argue there’s only one new song here, and that’s the finale “Siempre Peligroso” featuring Fermín IV from Control Machete. Maybe it’s not worth it to some people to have a “Greatest Hits” Cypress Hill album rapped entirely in Spanish. I get that. I would even argue there were some missed opportunities here. I would have included versions of “Hand on the Pump,” “Hits From the Bong” and “When the Shit Goes Down” among others. No matter. It’s still worth it just for “No Entiendes la Onda” better known as “How I Could Just Kill a Man.” They even released a new music video to support it!

Say it with me: “Todo lo que quería era un Pepsi.” The song pumps in either language, and that’s true for all of these tracks thanks to B-Real’s nasal delivery and DJ Muggs’ thumping beats. Sen Dog? He’s fine when he shows up too, but B has always been the frontman and undeniable star of the crew. Sen is the Flavor Flav to his Chuck D. He does his own thing now and then and it’s fine, but he’s supporting the star. He’s the guy you expect to hear repeating the song’s hook on songs like “Dr. Dedoverde” (you know it as “Dr. Greenthumb”).

“Los Grandes Éxitos en Español” is a fun album for me, but I think it’s also an important album for the Hill. It’s a direct acknowledgment of Cypress Hill’s cultural heritage, made by la raza for la raza, and was surely warmly received by its target audience. It just happened to accidentally be dope to me too. Some versions include a bonus “Blackout Mix” of Latin Lingo and if you happen to stumble across one don’t hesitate to pick it up.