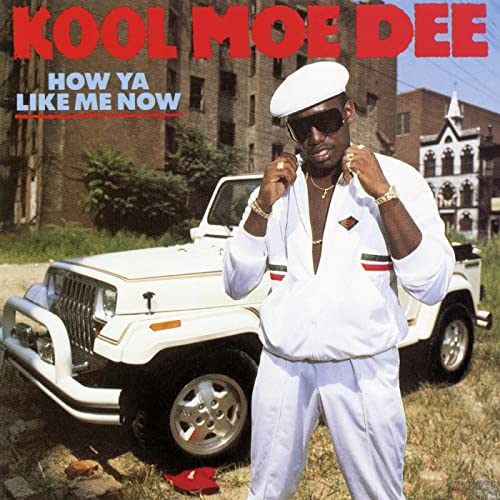 Not many old school rappers (from the late 1970’s to the early 1980’s) managed to successfully transition to the golden era of hip-hop (the second half of the 80’s to the early 1990’s) but Kool Moe Dee pulled it off. Such was his credibility and success that by the time his second solo effort “How Ya Like Me Now” was released, he was throwing major shade at up-and-coming rap superstar L.L. Cool J on the album’s cover. You could miss it at first but if you look at the cover of “Bigger and Deffer” and then Moe Dee’s album, you’ll see Cool J’s trademark red Kangol hat being crushed under the tire of Moe Dee’s Jeep. The feud between the two is also referenced by the children playing on the street in Moe Dee’s “No Respect” video.

It’s humorous to me that Kool Moe Dee purposefully dresses up like an old man for the video, mocking the very argument Cool J and his supporters made that Moe Dee was too geriatric to fit into then modern day hip-hop. By the clip’s end he peels off the latex mask and puts his trademark shades back on, proving in one song that he’s both the wise elder and the modern day rap superstar. This single didn’t even chart though, so perhaps it was a little TOO on the nose for Moe Dee to portray himself this way. He needn’t have worried though because “Wild Wild West” was the kind of smash hit most rappers DREAM of having but never get a single taste of.

Every single person involved in the instrumental of this track deserves credit, so I’m going to list them all — Bryan “Chuck” New, LaVaba Mallison, Pete Q. Harris, new jack swing kingpin Teddy Riley, and Moe Dee himself. The song’s incongruity makes it unforgettable. It’s got old school electro rap funk, the Cowboy whistle you’d hear in an Ennio Morricone spaghetti Western, keyboards, pounding drums, and that distinctive Moe Dee delivery that goes at his own speed. Even though he was perfectly capable of an up-tempo delivery (see “I Go to Work” off his next release), his slow flow here perfectly suits the mesmerizing melody. Such is the song’s legendary status that when Will Smith recorded a title track for his movie of the same name, he brought Kool Moe Dee on just to intone the words “Wild Wild West” on the hook and gave him credit as a featured star. That’s all he had to do.

One other songs from this Moe Dee album charted — the title track — which L.L. Cool J infamously mocked on the track “Jack the Ripper” by saying “How Ya Like Me Now? I’m getting busier/I’m double platinum, I’m watching you get dizzier.” I honestly had no idea just how bitter the feud between the two was growing up, but it’s clear there was no shortage of ill will. Despite that their feud was remarkably above the belt compared to modern rap beefs. Moe Dee felt that Cool J was disrespecting rap veterans and simply wanted the youngster to show respect, and while L.L. had no interest in giving it to him, it didn’t devolve into below the belt shots about who was more of a man or posturing about how big their cars (or dicks) were. Even referring to the song/album in his diss was acknowledging that Moe Dee was a hip-hop star of equal stature, although in short order James Todd Smith would surpass him in recognition and mainstream appeal.

On “How Ya Like Me Now” it wasn’t yet clear who the winner of the war would be. This is one of those pleasantly transitional albums that has one foot in the pioneer era Moe Dee hails from and the new era of rap that would become more Afrocentric, more gangster, and more experimental. Dee proves his credentials with the aptly named “Way Way Back” track, with the kind of samples you’d hear from disco rap deejays, the reverb of a rec center rap tape recording, and the “dip dip dive, so-socialize” flows of the earliest hip-hop hits. “This is the way we used to rhyme/these are the rhymes we used to say.” If a modern day rapper did this you’d call it a tribute or a throwback, but Moe Dee is only a few years removed from when every rapper DID rap this way, so he’s just doing exactly what he would have done with the Treacherous Three.

“I’m here to have fun/that’s my only purpose” quips Moe Dee on “Get Paid,” noting in his own way that “mo’ money mo’ problems” was always an issue in rap. It’s a very bare bones track musically, but that only allows Dee’s personality to shine through, noting that he’s got no time for those who want a free ride now off his rap success. Being overproduced would bring this song down — it’s good as is with exactly this much instrumentation.

I can’t give Kool Moe Dee a free ride either though. If you immediately know the samples that are going to be used from the song’s title, and you’re right when you listen to it, that suggests an incredible lack of creativity from all parties involve. “50 Ways” obviously samples Paul Simon’s “50 Ways to Leave Your Lover” and “Rock You” does the exact same thing with Queen’s “We Will Rock You.” Neither track is unlistenable but both seem like filler that was used to pad out the album, which in recent years has been padded out even further with “longer versions” of songs as bonus tracks along with alternate takes and instrumentals.

That said “How Ya Like Me Now” succeeds in many ways that Moe Dee’s self-titled album did not. While his solo debut often seems dated in terms of style and flow compared to his contemporaries, his sophomore release brought Dee right up to the present day and gave him a brief edge in the back and forth war with Mr. Smith. To this day you can throw on “Wild Wild West” and get a Kool-Aid smile from ear to ear, and even on the album’s weaker moments Moe Dee is undeniably as Kool as his name.

Kool Moe Dee :: How Ya Like Me Now
7Overall Score
Music7
Lyrics7