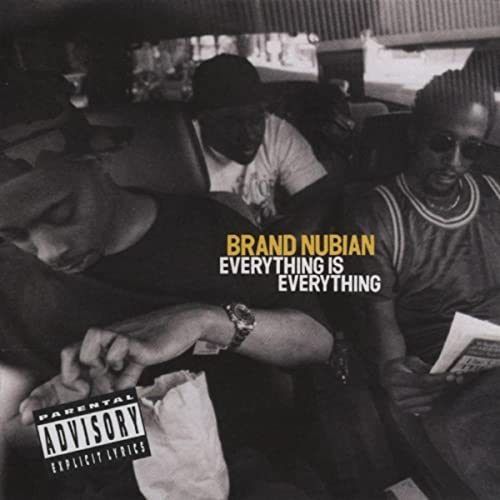 In the initial aftermath of Grand Puba’s departure from Brand Nubian, the group’s “In God We Trust” album proved that the group could forge a path forward successfully. DJ Sincere stepped up to replace Alamo, Lord Jamar and Sadat X self-produced some banging tracks, and the same Five Percent beliefs that informed their debut were as strong as ever. The group also benefited from an era where stridently homophobic lyrics couldn’t get you #Cancelled, although some of X’s remarks raised eyebrows even back then. Nevertheless expectations for the third album “Everything Is Everything” were high, and “Word Is Bond” seemed poised to deliver on them.

Built on samples from Average White Band and Earth, Wind & Fire, the song couldn’t fail. It even offered a surprisingly sober sentiment for what was otherwise a party jam courtesy of Lord Jamar: “Set to show/everybody in the party that we’re nice without sipping on Bacardi.” The Mathematics were still on the track, but their placement was subdued compared to previous singles. The second single “Hold On” actually set the bar even HIGHER for the group. Cleverly borrowing from Simply Red’s “Holding Back the Years” for both the instrumentation and the hook, the song takes a hard look at black on black crime and urges the community to do better. Peep the words of Sadat X as someone tries to instigate a fight:

“I’m just here with my lady, and you came wit’cha man
This would force him to front, and I’m sure he don’t want it
over some old bullshit, when I’m quick to pull shit
Live dad, everything is everything
I got a lot of shit to do! I can’t afford to catch a charge
I’m a product of the streets, and I couldn’t make no peace
All the real hard niggaz I know, is on the down low
Straight for real estate, on a scale I place your fate
Now I’ma let you skate, you was a little weeded
And I seen you don’t need it”

Given how stellar these singles are, it’s almost inexplicable how the rest of the album completely missed the mark. One of the biggest mistakes was remixing “Lick Dem Muthaphuckas.” The original version from the “Menace II Society” soundtrack was funky and energetic, but the update has a lethargic, lifeless beat AND re-recorded verses that feel entirely phoned in. Everything good about the original is stripped away until nothing is left.

“Lethargic” describes a lot of the performances on “Everything Is Everything.” I could swear that “Down For the Real” was slowed down in the studio. Sadat X’s voice takes on a hollow robotic quality, reverberating around a cavernous studio as he barely works up the energy to spit a single bar. “Nubian Jam” is a funkier listen, but it’s just as ponderous in delivery. Jamar’s ego is damn near out of control too. “Lord Jamar is like Jesus/speaking in parables/and to devils it’s unbearable/to see this.” It’s not the lyrics that are unbearable though — it’s their slow, stilted delivery.

Trying to find great moments on this album other than the two singles is like searching the the proverbial needle in a haystack. A guest appearance from Busta Rhymes provides much needed energy and charisma for “Alladat,” but the instrumental is so unlistenable that his cameo is wasted. “Tell the Devil to his face he can suck my dick” quips Jamar on “Claimin’ I’m a Criminal,” a much superior track that still feels like it’s tripping on Quaaludes. The song at least makes a point about the prison-industrial complex that’s as relevant then as now if not far moreso. Even though the guest stars on the posse track “Step Into Da Cypher” are virtual unknowns, the song’s simple clean instrumental gives Manny, Serge & Snagglepuss the room to breathe and space to shine. Whatever happened to them anyway?

The album ultimately becomes a game of subtraction. Remove three skits and you’ve got 13 tracks. Remove two singles and one remix and you’ve got 10 tracks. Remove 80% of what’s left for being boring and what do you have? NOT A WHOLE LOT. It’s not as though Lord Jamar and Sadat X suddenly lost the ability to produce funky Brand Nubian jams because the singles not only prove their competence, they show outright excellence. The problem with “Everything Is Everything” though is (ironically) everything. You’d be better off buying the singles and skipping the album. Despite how stellar their sophomore release was, THIS was the real sophomore slump.

Brand Nubian :: Everything Is Everything
5.5Overall Score
Music4.5
Lyrics6.5