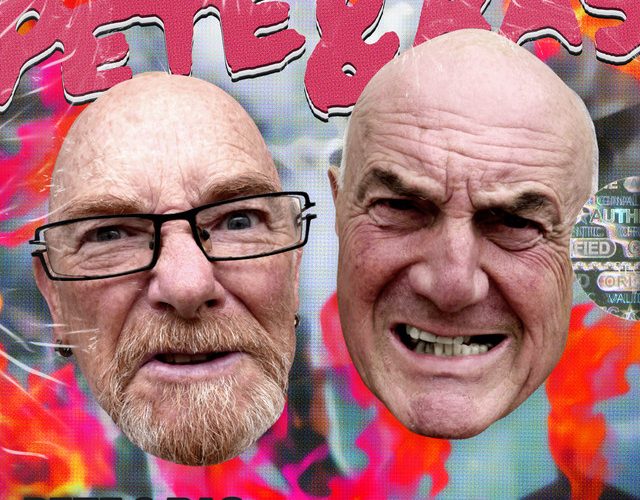 Buckle up ladies and gentlemen, because Pete & Bas aren’t any old rappers – they are old rappers. Before we even discuss the quality of their music, the very notion of two 70-something blokes from the East End of London attempting to make drill music is an entertaining one, however, you look at it. The fact they aren’t just decent rappers, but better than the majority of drill rappers is both a sign of how refreshing their approach to the genre is, but an indictment of the comfortable status many artists have established for themselves. It’s often very similar sounding artists over similar-sounding beats, where the hustle and drive for productivity is prioritized over crafting timeless music – Pete and Bas have effectively adopted the wrestling gimmick mantra: be yourself but turned up to eleven.

In 2021, the elderly duo racks up millions of views on YouTube after bursting on the scene just three years earlier. Pete is the slightly younger, shorter man who apparently worked in the postal service before retiring; Bas (short for Basil) is older and taller, with a mysterious past that he refuses to disclose, perhaps adding to the intrigue and potential truth in his lyrics. Speaking of which, lyrically the two sit somewhere between Vinnie Paz and Ghetts – brooding menace and laugh-out-loud excessive violence are what you’re dealing with here. Hearing it from two pensioners, no matter how imposing their approach feels, is part of their charm and a key reason for their success.

“Shut Ya Mouth” was their breakthrough track, relying on the stereotypical London geezer persona. Similarly, “Pint and a Fag”, “Do One” and perhaps their finest moment, “Dents in a Peugeot” followed shortly after, playing up to this image, and each song was better than the last one. The production improved each time, as did the bars.

Pete & Bas acknowledge what they are – two old white guys who fully embrace their passions. Drinking, smoking, fighting, women, and money – all themes that have been heavily covered by rappers, but never like this. It’s like listening to M.O.P. if they broke out of a retirement home and ran rampant through their old stomping grounds (if those stomping grounds were in England). It’s like if Snatch was filmed today, this would be an apt soundtrack. It’s like walking into a pub full of West Ham fans and challenging the two mean-looking bastards at the bar to a rap battle – and getting your head caved in with verbal abuse. And then put through a windowframe…

What was originally viewed as a comedy act, is now one of the most popular British music sensations of the past few years. Their rhymes are often funny, but the duo deliver their vicious rants straightfaced and with all the precision of experienced emcees. The breath control is frankly phenomenal considering both their age (Pete is 71, Bas 74), and the fact they only picked up a mic shortly before putting these videos out. Some of the flow from both artists is outstanding, and hearing Bas was teaching someone the piano when he originally met Pete, shows he has some musical acumen. He knows how to use his voice, but I suspect they both have a team behind them helping to craft this brand of Bad Grandad.

“Quick Little Mixtape” continues the Pete & Bas brand of rap, boasting slicker production and some interesting guest features too. “Oi” boasts a catchy chorus and is a warm welcome to what quickly transcends into an onslaught of heavy bass and sinister boasts. The hooks are a strength of the two, particularly Bas on “Knock a Man Down” which is a quintessential example of Bas’ ability to drift between smooth operator and deadly street fighter. His deeper vocal tone is genuinely one of the nicest rap voices I’ve heard in a while, and Pete’s lighter, rougher style complements him well.

The use of Charlie Chaplin and Felix the Cat in their punchlines is a nice touch, references their generation are more familiar with, but being interspersed with terms like feds which no-one their age would use given it’s an American term used by a younger generation. When Pete claims to kick you in his Reeboks or refers to popular rap artist AJ Tracey, you suspect they have had some assistance, but quite frankly, it doesn’t matter given the results.

Something that demonstrates the strength of the Pete & Bas movement is their willingness to put other (often elderly) emcees in the spotlight. The Snooker Team, who appeared on “Windowframe Cypher” include Patrick Karneigh Junior, Albert Allen, Smith, Norman Pain and McMillan; they return for the song “Numbers” and pop up in the video for “Bermondsey” (named after an area of South East London).

Norman Pain returns on the track “Golf” and steals the song with his brand of loose cannon rap, literally firing a rocket at a helicopter in the video. Despite being completely obsessed with violence, any hint of cursing is censored and it sounds better because of it (the frequent mention of fags is because it’s slang for cigarettes).

The Liverpudlian Patrick Karneigh Junior (or PKJ) lends his singing ability to “Lifestyle”, aided by Autotune. And it actually works. The Scouse accent is so harsh and distinct that it often sounds great on tough production, which is why northern Grime is often better than its southern counterpart.

The novelty of Pete & Bas can wear thin towards the backend of “Quick Little Mixtape”. “2 Phones” has the duo selling what I presume is drugs, but it lacks killer lines, and “Duffle Bag” is essentially the same song under a different name. Yet, with a video I could see these being more impactful, like the single “Speeding” that throws in Bas having an argument with his wife over a kitchen installation – now that’s real rap! That’s probably my one criticism – their comrades PKJ and Norman Pain have that ability to touch your heart as well as your face, but then that might undo some of the relentless abuse that makes Pete & Bas so fun.

With their visuals being a key reason for their fanbase, just listening to “Quick Little Mixtape” highlights that the geriatric pair more than hold their own amongst drill contemporaries – if anything they are two of the best in the scene. The fact they sent for Skepta, Stormzy and Fredo and didn’t get any response just adds to the idea that nobody wants trouble with these two. While a lot of their claims could well be fiction, having lived three times longer than most popular emcees, their tales inherently possess a greater sense of legitimacy. Did they knock out bailiffs in the 1970s? Nobody knows.

It could well all be satirical performances aimed at the “YouTube Reaction” generation to help generate views. It could well be ghost-written by actual emcees (and I’m pretty sure some of it is) but at the end of the day, music is a form of entertainment and you’ll be hard-pressed to find any rappers as entertaining as Pete and Bas.

Age ain’t nothing but a number, after all.