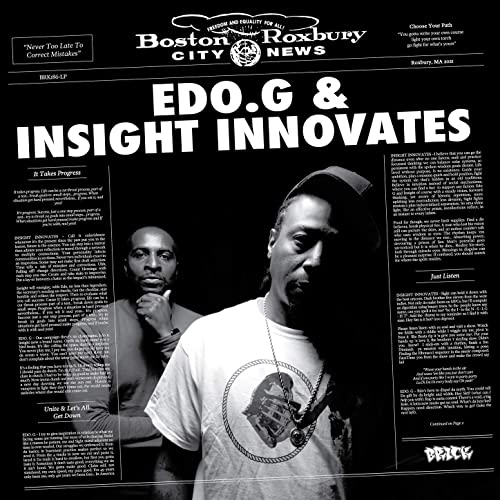 I’d like to thank Brick Records and Traffic Entertainment for the promotional copy of “Edo. G & Insight Innovates” they sent me. I’ve got Edo records in my crates dating back to “Life of a Kid in the Ghetto” (his label at the time misspelled his name as “Ed O.G.” and created a decade of confusion) so having another one for the collection is truly a pleasure, especially since they took the extra effort to mint it on bright blue vinyl. I thought the least I could do in return is show off the artwork and the album. You can’t hold a digital stream in your hands or put it under a needle on a turntable. Physical media matters.

Standard disclaimer follows — although RapReviews received a promotional copy of this record, all thoughts on “Edo. G & Insight Innovates” are our own and this review was not screened before publication. Given the opening paragraph though I think you can safely assume I’ve been a fan of Edward Anderson since the early 1990’s, when I bumped songs like “I Got to Have It” and “Be a Father to Your Child” as often as possible. Ed always struck me as a streetwise individual who aspired to uplift himself and others, while managing to avoid the pitfall of coming off cornball in the process. I think in part his playful sense of humor helped strike the balance between being too hard OR too preachy, and you can still hear that on “Just Listen.”

It cracks me up to hear Siri provide both the intro and chorus for the song, and also gives me fond memories of the narrator for “Midnight Marauders” to boot. (Maybe she inspired Siri’s voice? Who knows.) All of the tracks are produced by Insight, but both men split the vocal duties. Edo continues to address Siri with his bars, asking for “directions” because rap has lost its way. “Rap is out of control/there’s a void, a big hole/a lot of new music got no soul.” From some elder statesmen it might sound bitter or jaded, but Edo is sincere about his desire for everyone to do better and be better. The duo bring this same sincerity to “It Takes Progress,” with Insight providing a Primo-esque layering of instruments and (true to his name) verbal insights. “Get the cheddar, stay humble, and collect the respect/Then, re-evaluate what you call success.”

On “Never Too Late to Correct Mistakes” Edo raps these words: “People always say, ‘Edo how you still do it?’ See I love the music and my movement is improving.” It’s a testament to his longevity that he’s been in rap for this long and neither burned out nor faded away, but I’d be remiss if I didn’t note two things about “Edo. G & Insight Innovates” for the record. First of all this is a very short album that clocks in at ten tracks and a half hour total, and since Edo is splitting the lyrical duties he’s not being pushed extra hard to come up with 15 minutes or less of raps. That’s not to say his work isn’t solid here, but that also leads me to note that Insight is the younger and hungrier sounding member of the team on songs like “Choose Your Path.”

Edo is not ignorant of the potential criticism, noting “It’s not a come back, it’s a come up” on the track. Hearing him on the track though it’s frankly impossible not to notice Insight blesses his production at twice the speed. I imagine listeners are going to have mixed feelings about it. If you’ve been rolling with Edo from the “Roxbury 02119” days to the present then it’s all good to have him in this role — he’s the older, wiser, more methodical and thoughtful veteran on the tracks. He’s not in any hurry and doesn’t need to be. If you’re new to his work though it might seem like Insight would have thrived more on his own. Perhaps it’s my own bias from getting older myself that I respect the respect Insight has for a Boston hip-hop legend, but I think the combination on “Edo. G & Insight Innovates” works — I just wanted far more of it than I got here. I hope this is the beginning of a fruitful partnership with much longer records to come in the future.