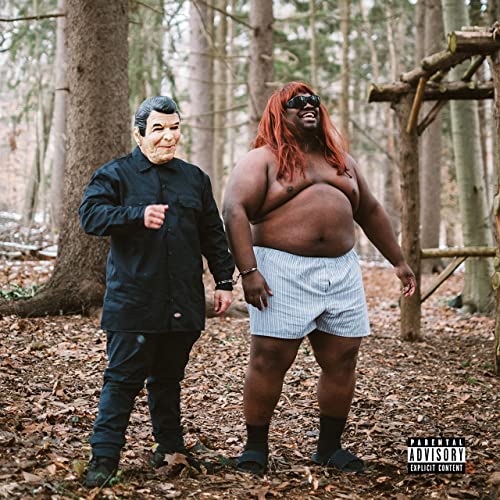 This is actually the second time Fatboi Sharif has released “Gandhi Loves Children.” By his own account “the world wasn’t ready for it” last December. That might actually be true given we were neck deep in a global pandemic at the time. Don’t get me wrong — we’re still in it — but now vaccinations have changed daily life for the better. I won’t get on my soapbox about how conspiracy theorists are keeping the adoption rate too low, because I’m too busy figuring out what Sharif’s own conspiracies are. Whether the original version or this new “deluxe edition” of his debut, the overriding feeling I get from songs like “Tragic” is someone randomly stringing together disparate threads of pop culture into a complex and unnecessarily confusing tapestry.

The issue isn’t that you can’t understand what Fatboi Sharif is saying. His manner is soft spoken but the words are still crystal clear thanks to producer Roper Williams. His diction is precise and his measured flow allows for perfect breath control. The problem is that the entire song is just a series of non sequitur names and events presented as a list, and that list doesn’t correlate to anything. “Trump winning/Cosby lust women/Gandhi loves children/Government drugs filled in/Brian Pillman.” What? The spliced in interview clips from Richard Ramirez make more sense than the song.

This is a running theme for Fatboi Sharif. He’s trying very hard to convince us that he’s off his rocker. “Malcolm X, Jeffrey Dahmer’s, the same person… oh I’m bugging?” At first he reminded me of someone trying to imitate Bizarre in both size and persona, only he forgot that Bizarre backed it up with clever lyrics and jaw dropping punchlines. I discarded this comparison and moved on to Kool Keith, who did such a good job of convincing people that he’s off his rocker they believed he was once locked up in an asylum (which he denies). Again though the comparison fails because even at his best/worst, Keith Thornton has always had a focus — railing at his critics, dabbling in amateur pornography, imagining himself as a man made monster straight out of science fiction. The quality of his work varies, but there’s definitely method to his madness. Sharif? Not so much.

Sharif certainly keeps up the image for the press though, saying things like “I wish my brain was normal” in interviews. It’s contrived to the point that I’m more than 100% skeptical he’s perfectly sane. If he was actually suffering from a form of mental illness, it would be incredibly exploitative to put his music on records and sell it to the public. Of course if he was the one exploiting himself you could argue that’s different since he’s in control of it and benefiting from it, but there the reality of “Gandhi Loves Children” comes crashing down again. Could an insane person really be in control of his creation to that degree? Theoretically someone could purposefully choose to go off their meds to record music, then get back on them after to sell it, but that seems both incredibly dangerous and an implausible explanation for this album. The simplest explanation is that he’s a perfectly rational human being who adopts a demented persona at his convenience in an effort to make compelling music.

Sometimes it actually IS compelling. Roper Williams’ production really helps Sharif get beyond what would otherwise be gibberish. The spooky Gravediggaz sound of “Prescription” revives hip hop horrorcore. A quiet drum set and a choir of angels create an airy atmosphere for “Smithsonian.” Once in a while he even says something accidentally profound: “My sanity/manipulated like Christianity” barks Sharif in the intro to “Nasty Man,” one of the album’s stand out tracks.

I’m torn on whether or not to recommend Fatboi Sharif to others. A deluxe version of “Gandhi Loves Children” seems like a step in the wrong direction. Pared down to only the essential tracks, this could be a much more worthwhile endeavor. Despite how manufactured the portrait of his mind state is, some genuine talent slips through the cracks in that facade to impress me just a little bit. Unfortunately this presents a perfect catch 22 scenario — if he stopped trying to present himself as nuts he might be really good, but if he didn’t put on this act would people still be interested in him? I can’t say what the right answer is, but I can say I didn’t end up hating this album despite my initial skepticism. I might want to hear more from Sharif.