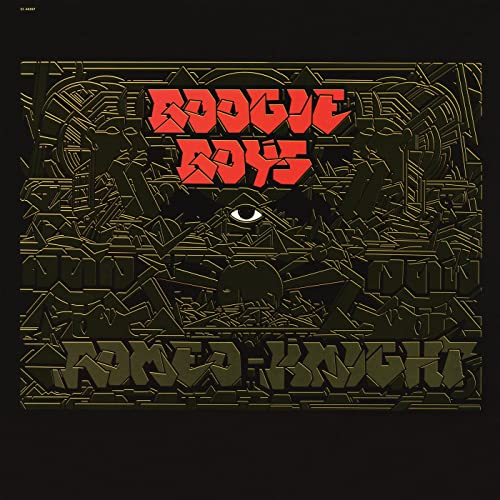 I’m gonna be dead honest here — I thought the Boogie Boys were a one hit wonder. The only song of theirs I ever heard was 1985’s “A Fly Girl,” and for a one hit wonder, it was hugely influential. Everyone from E-40 to Jay-Z to EPMD has sampled from it for their own hit songs. The mechanical sounds of the track are immediately identifiable. It sounds like a chop shop where cars are being stripped down for parts. Everything clanks, thumps, cranks and turns in a way that in print sounds hideous but in practice is LOVELY. It makes the Boogie Boys chanting “A FLYYYYYYYY GIRL” in the chorus that much more memorable.

Little did I know that the Boogie Boys had three full length albums for Capitol Records back in the 1980’s. The last one before the Boys disbanded was “Romeo Knight” in 1988, and they were very close to done before it was even released. Founding member Lil’ Rahiem (Rudy Sheriff) left the group that year, and remaining members Romeo J.D. (Joe Malloy) and Boogie Knight (William Stroman) decided to continue as a duo, hence the album’s “Romeo Knight” title. They were trying to take ownership of the gimmick as best they could, and they even had legendary graffiti artist PHASE 2 create the album’s cover. Both Boogie Knight and PHASE 2 are no longer with us, so pour out a little liquor for them as we look back on this album.

“Here’s a taste, of the bass, all in your face!” Indeed. That’s one thing the Boogie Boys have in spades — bass beats and strong percussive sounds. That’s the only thing they have though. The bars on the album’s title track are simplistic at best: “The ability to rap is an art that I’m blessed with/so when I’m rapping I’m not to be messed with.” I don’t agree. I think most rappers in 1982 could have messed with this, because that’s how dated their flow sounds, and since this came out in 1988 that’s not a good look. You don’t want to be a fish out of water in your own time let alone in retrospect. They were also aiming for some sort of radio crossover appeal by singing on “I’m Comin'” that there doesn’t seem to have been an audience for.

Like many rap groups that became successful on the strength of one single in the 80’s, the Boogie Boys fell into that trap of forever trying to recreate it by copying what worked the first time. It almost feels like “meme rap” when you listen to songs like “Pussi Cat,” “I’m a Lover” and “Home Girl” in particular. Take a minimalistic instrumental heavy on percussive sounds and talk about how much you like the opposite sex. It sounds like it could have been generated by an AI algorithm that studied “A Fly Girl” and picked each individual element to recycle.

The formula changes a little on the rock guitar licks of the album’s closer “Rise Up,” but only a TINY IOTA from the rest of their work. The raps are still very deliberate and plodding, and while the title hints at Afrocentric empowerment, the song’s message is little more than a thinly veiled dance track to “clap your hands and stomp your feet” pretending to be deep. The problem is that the tempo is so slow you CAN’T dance to it. Even at double speed this song might be too damn slow. So much of the song is non-verbal it feels like the Boys ran out of ideas and padded out the album with an instrumental at the end.

I personally enjoy going back to albums that came out during my younger days, particularly if they’re rap albums that slid under the radar and didn’t catch my attention back then. “Romeo Knight” seems like one that should be missed though. It’s not because it’s offensively bad, it’s because it’s incredibly BLAND. Even a bad album can have two or three interesting songs, but nothing the Boogie Boys do here even rises to “A Fly Girl” levels no matter how hard they try. It sounds like Lil’ Rahiem was the heart and soul of the group, and once he left, they were instantly doomed.