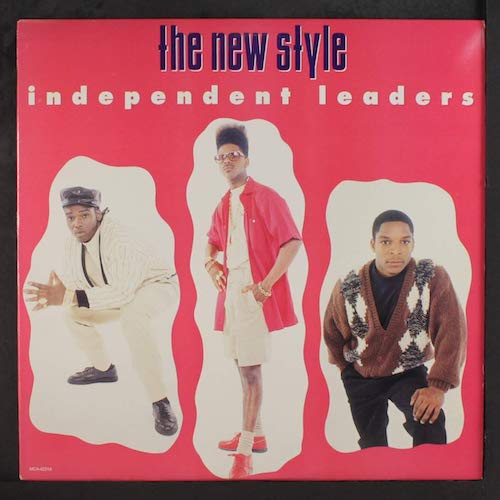 Are you down with O.P.P.? Then you’re down with The New Style.

Even though the membership of both groups is exactly the same — Treach, Vin Rock and Kay Gee — it’s more likely than not you’ve never heard of The New Style. “Independent Leaders” was the East Orange, New Jersey rap group’s major label debut on MCA Records in 1989. The album’s lone hit was the track “Scuffin’ Those Knees,” and “hit” would be exaggerating a bit. The truth is this album went double wood. This could have easily been the beginning and the end of their rap careers were it not for the intervention of Queen Latifah, who got the group to change their name and sound, and got them signed to Tommy Boy Records as a result. The rest is history.

The truth is though if you released “Independent Leaders” as a Naughty By Nature album proper, I think fans would cop it even today. The album is largely self-produced and DJ Kay Gee always had a knack for production, so none of these tracks are whack. In “Start Smokin'” alone I can count numerous loops I heard other rappers rock. LL Cool J used “My Jamaican Guy” for “Doin’ It,” MC Lyte used “I Wanna Be Where You Are” in “Poor Georgie,” and so on. Vinnie and Treach sound slightly younger than they did two years later on NBN’s self-titled debut, but not enough so you can’t recognize them. Speaking of recognizing, you’ll immediately think “Eric B. is on the cut and my name is Rakim” listening to “Picture Perfect.”

Honestly if I listed every single break you know from another classic rap record, it would take up the entirety of this review. “We’ve done it all — smooth songs, hype songs, love songs, rock ‘n roll songs, and so on” brags Treach on “To the Extreme.” The song sounds like the exact moment that rap said goodbye to the 1980’s, and the references are charmingly dated, from John-Boy on The Waltons to then New England Patriots quarterback Doug Flutie. It’s certainly better than anything on Vanilla Ice’s album of the same name.

If there’s one thing I can knock about “Independent Leaders” it’s how earnest the album is at time. “Children still dying, we refuse to help/I was one never felt so I punished myself/I threw a pen in my fist, composed a list/of helpful deeds, I could do to assist.” I’m sure Vin Rock meant every word he rapped on the title track, but that probably doesn’t square with your image of Naughty By Nature as the group behind “Written On Ya Kitten.” Nobody expects NBN to uplift the youth or speak truth to power, but The New Style clearly saw themselves as “leaders” in the Afrocentric hip-hop movement. Even when they battle each other on “New vs. Style” it’s a relatively tame affair. Nothing they said here would last five seconds on Verzuz TV.

Even their cover art seems a little bit too Alfonso Ribeiro for the times. Hip-Hop music was moving in precisely the opposite direction thanks to the success of Public Enemy, Ice-T, N.W.A, et cetera. Meanwhile The New Style were trying to be clean cut, non-threatening, and as American as apple pie. Hell they even sample “Jack & Diane” on the album’s closer “Bring the Rock.” I like it but holy shit you couldn’t possibly make a more blatant appeal to white people than that.

In short Queen Latifah was entirely right to take The New Style and give them an even NEWER style as Naughty By Nature. No one in the group ever seems to take ownership of “Independent Leaders.” It’s not like they are performing songs from it in concert or speaking on it at length as part of their legacy. It’s purposefully forgotten and ignored but listening to the album it’s plain as day to see these are the same three who are down with O.P.P. — yeah, you know them.