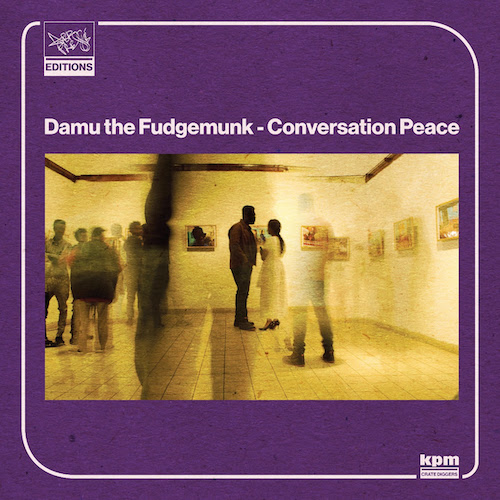 With a name like Damu the Fudgemunk, you better be good. I know that sounds like a parody of an old Smucker’s Jam commercial, but it’s also the truth. The name sounds inherently silly. Are you a Keebler elf cookie masquerading as a producer? Are you a Bavarian monk who makes fudge by day and beats by night? Are you Jeru the Damaja’s long lost cousin? You could be all of these things with a name like Damu the Fudgemunk, but what he actually happens to be is hella dope behind the boards. He’s not one of those producers who gets talked about like Primo or Alchemist… but he should be.

It’s not surprising to see Damu working with Blu again on “God Speed” from “Conversation Peace,” but it’s even less surprising that the entire album would be an instrumental piece/peace to while the days away by. Damu doesn’t just choose samples and loop them, he layers up different arrangements in intricate patterns and never stops messing with the percussion or the melody. Listening to “God Speed” is more like listening to free form jazz, with the only traditional part of the rap song being Blu’s rap itself. I could keep this one on loop for an hour and not get tired of it.

It’s no coincidence that Damu labelled one of his pieces “Four Better or Worse” and then split it into four parts, although it was incredibly pleasing to hear the underrated female spitter Nitty Scott on part one. The lineup changes for each part and nobody disappoints — Blu and Raw Poetic each do their thing on parts two and three, and Mr. Fudgemunk takes the spotlight himself on part four. The latter reminds me of Erik Satie’s “furniture music” in the best way — sounds you play to fill a room with a mood. That mood in this case would be upbeat, vibrant, turntablist laced rap jazz. I know you think I just described a sound and not a mood, but in Damu’s hands it’s a WHOLE ASS MOOD. Trust me. “Okay, +OK Computer+, set me free.”

There aren’t a lot of clips I can share from the nearly 40 minutes of “Conversation Peace,” largely because a lot of them have not been shared online. At the end of the day that means you’ll either have to take my word for it or not that Damu doesn’t create lazy music or work with bullshit emcees. Everything he does is chosen with purpose and meaning to create an experience good enough that you’ll both want to savor it and almost immediately repeat it. Sadly with good food or libations that’s impossible — once you taste the fudge, the fudge is gone — but once you buy “Conversation Peace” you can keep playing it again to your heart’s content.