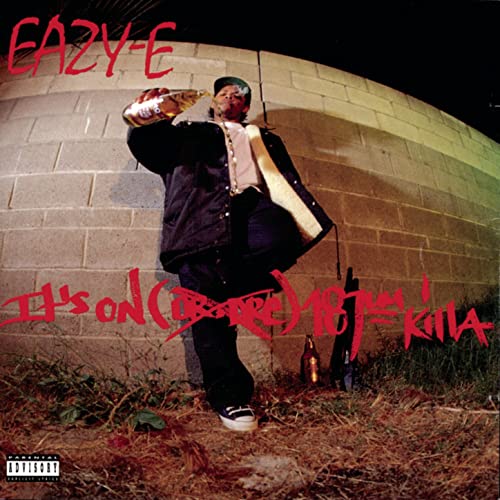 “Nineteen motherfuckin’ niiiiiiiiiine trey! And I’m back in this bitch!”

“It’s On (Dr. Dre) 187um Killa” was released at the height of Eric “Eazy-E” Wright’s feud with former N.W.A producer, rapper and labelmate Dr. Dre. A short two years before they had been comrades in arms for one of hip-hop’s most notorious albums, which itself took shots at former N.W.A member Ice Cube as a “Benedict Arnold.” That may have seemed like solidarity at the time, but Eazy-E once rapped the words “Ice Cube writes the rhymes, that I say” on a song — unintentionally admitting O’Shea Jackson was the glue holding the group together. With Cube gone Dre was the first to realize it was only going to work for so long, and when he left to form Death Row Records with Suge Knight, things reached a boiling point. Dre’s new protege Snoop Dogg helped him roast Eazy-E on the hit single “Fuck Wit Dre Day,” so a response back was both inevitable and expected.

No matter who’s side of the feud you were on, “Real Muthaphuckkin G’s” goes down as one of the funniest music videos of all time. The antagonist of the video is dressed up as a desperate Dr. Dre holding up a cardboard sign that reads “Will Rap For Food” and dancing as drivers pass by. Eazy-E and HIS proteges B.G. Knocc Out and Dresta spit verses mocking their new Benedict Arnold turncoat, while E implies that “Dre Day only made Eazy’s pay day,” as if the only way he could get out of a Ruthless Records contract was to promise Eric Wright a share of royalties in any future endeavors. I’m obviously extrapolating and that’s probably not the case, but the references to World Class Wreckin’ Cru were an entirely matter. “All of a sudden Dr. Dre is the “G Thang”/but on his old album cover he was a she thang.” It’s hitting below the belt and a little bit homophobic too… but the old Dre was definitely a “glam” 80’s artist, complete with sequins and a stethoscope. Snoop doesn’t escape scrutiny too, being dubbed an “anorexic rapper,” and when E says “at Death Row I hear you’re getting treated like boot camp” he was FAR TOO ACCURATE. Suge Knight is not a guy to go into business with.

Even though Eric Wright was not long for this world, passing away due to complications a little under two years later, he wasn’t thinking that way on “It’s On (Dr. Dre) 187um Killa.” While he spent a majority of the album taking potshots at Dre, the second single “Any Last Werdz” opens talking about the far off year of 1999 when “the world’s at its end.” He clearly assumed he’d be alive at LEAST that long. Produced by Cold 187um of Above the Law, it also includes cameos from 187um and Kokane, and the shit’s funky. It doesn’t thump quite as hard as the Rhythm D produced “Real” but it was a great follow up all the same. Unfortunately I can’t say the same about “OG Mix” of “Boys N Tha Hood.” I can’t blame Eazy-E for wanting to remake a N.W.A classic that made him famous on his own terms but Dr. Jam’s production doesn’t hold up to the original.

“It’s On (Dr. Dre) 187um Killa” was classified as an “extended play” or “EP” when it first came out, but in modern times I have a hard time not viewing it as a “long play” or “LP.” It’s over 37 minutes long, which is far more than you get from most rappers who release “albums” in the present day. On the other hand the album’s final song “Down 2 Tha Last Roach” REALLY pads things out by being almost eight minutes, and the opening track “Exxtra Special Thankz” isn’t a song at all. I think on an album like this you could go either way, but to quote a famous line from a famous film “His momma named him Clay, I’ma call him Clay.” If they said it was an EP, so it is.

I have fond memories of this release, particularly how impactful “Real Muthaphuckkin G’s” was in rebuttal to Dre and Snoop, which ironically resulted in the song being Eazy-E’s most successful single of all time. That song is a certified hip-hop classic, right down to the whispered “ahhhh” that punctuated the big funky bass beats. It’s still a song you can rattle the subwoofers with to this very day. Unfortunately I have to take off the rose colored glasses and admit that tracks like “Still a Nigga” and “Gimmie That Nutt” are just average at best, and both feel like they’re clinging to N.W.A’s legacy by their titles alone. Sadly this was the last thing he’d release while still alive, with his second officially recognized full length album coming out posthumously, followed by many “Best Of” compilations — some of quite dubious quality. At least on “It’s On (Dr. Dre) 187um Killa” you can hear Eric Wright in his prime, and while the Dre disses carry the presentation, his prescient predictions about Death Row foreshadowed that label’s demise not long after his own.