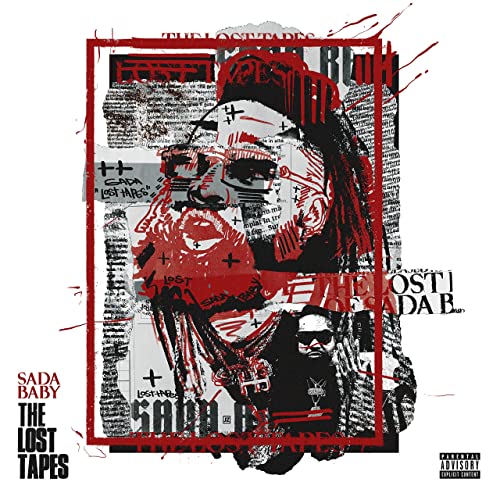 Over a year after my first review of Sada Baby I’m still unsure how I feel about him. When he’s not crooning he has a raspy voice that’s very distinctive to the point you hate it or love it (I lean to the latter). When he lets the computers correct his pitch he loses every part of that signature Detroit sound. Two tracks into “The Lost Tapes” the dichotomy between the two couldn’t be any wider on bass heavy thumper “The Bool” and the incredibly lackluster “Heavy Press Hotel.” Thankfully the latter is more the exception than the rule here.

He switches right back to his normal raspy voice on “In Real Life” and starts spitting so fast it sounds like he might expire from a lack of oxygen at any second. “Caught a war wound, that’s why I been coverin my finger/Lame nigga lost a leg, he can’t even linger, huh/If he just stayed a lil’ bit longer, I’d be undefeated, huh/In my opinion, it’s a draw, I gave him what he needed.”

The minimalist instrumental and strong percussive beats really play up Sada Baby’s delivery. It’s slightly ironic that he says “I’m too old for that/I’m too grown for that” but still does a lot of macho posturing about how he’s the “heavyweight” in the hood and “got the belt” to prove it. I’m not complaining, I’m just saying. That’s the other constant contradiction of Sada Baby — he’s paid dues, he’s earned the spot he has now, but you get the feeling he’s still obsessed with proving he belongs. More often than not though this works out on tracks like “Brazy Taxi” when he drops punchlines like “I think I’m a zombie, I don’t feel nothing.” It’s his obsession with showing everybody he’s the coldest, most ruthless, hardest rapper from the D that gives him his character.

Even songs with comical titles like “Big Hot Cheeto” end up being an excuse to talk about how many guns he has and how willing he and his friends are to use them. “Let me put them shooters on your ass, give me a reason.” “Because of us them niggaz develop post-traumatic stress.” Thank you Sada, we get the idea. The pleasing thing about “The Lost Tapes” is that at only 13 tracks long, it’s enough of the Cheetos to be a pleasing snack but not so much you’re left covered in greasy powder. The drums snap and the bass slaps on tracks like “Good Wealthy,” punctuated by church bells in a way that makes Sada’s already intriguing vocal tone even more mesmerizing.

Reviewing “The Lost Tapes” made up my mind for me — I’m a fan of Sada Baby’s work. He’s borderline obsessed with being the realest, hardest, most “fuck with me and I’ll fuck you up” rapper you know, but his delivery and breath control keep it interesting even when the topics get repetitive. There’s just enough wit to his raps to give those topics an extra charm, and the production is tighter than a G-string. Nothing is perfect here but everything is enough above the average that I’m glad he found the tapes.