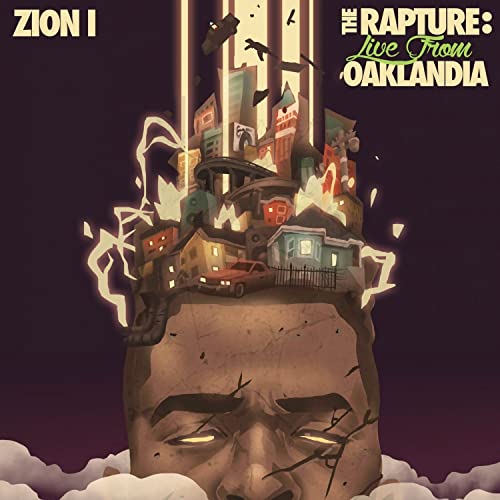 Zion I :: The Rapture: Live From Oaklandia

I’m still grappling with the loss of Zion I rapper Steve Gaines, aka Baba Zumbi. As I write this, the details surrounding his death are unclear. He went to Alta Bates hospital in Berkeley with COVID symptoms, he was allegedly involved in an altercation with staff and hospital security, and in the aftermath he was dead. the whole situation is heartbreaking. He died in a hospital before receiving treatment for a disease that is ravaging the country. Zumbi, who had asthma, was hesitant to get vaccinated against COVID, a vaccine that very likely could have saved his life. Most tragically, he was a husband, friend, son, father, activist and important Bay Area rapper. I’m struck by the fact that he died in the same hospital where my daughter and most of her friends were born.

So rather than speculate on how he died, or wallow in sadness, let’s celebrate what he brought to hip-hop. Zumbi formed Zion I with AmpLive twenty years ago, and the group has been an important part of the Bay Area hip-hop scene throughout their tenure. I won’t pretend that I was the biggest Zion I fan. I was more aware of them than into them. The only Zion I album I spent a lot of time with was “Shadowboxing,” which I reviewed for this site and found wasn’t quite for me.

Their 2015 live album “The Rapture: Live From Oaklandia” is a good place to start for an overview of what Zion I was all about and what a force they were live. The concert took place in Santa Cruz, California, about 70 miles south of Oakland. The Rapture tour featured a live band, headed by bandleader and keyboardist Kev Choice and featuring drums, guitar, bass, trumpet, cello, vocalists Codany Holiday and Vivica Hawkins, and guest MCs Deuce Eclipse and Dustin Sharpe. The latter do a decent job of filling the very big shoes of The Grouch, who by 2015 had moved to Maui and wasn’t touring with Zion I.

The track list pulls heavily from their debut, “Mind Over Matter,” but also pulls tracks from throughout their catalogue. While there is a lot of electronica in AmpLive’s beats, Zion I have always been a very melodic hip-hop act, so they translate well to live instrumentation with some modifications. That includes using actual hand claps for the hand clap beat on their club banger “Hit ‘Em,” with the aforementioned Deuce Eclipse and Dustin Sharpe standing in for The Grouch and Mistah F.A.B. The crisp sheen of the more EDM focused tracks is gone, but in its place comes pounding drums, swelling trumpet, and an epic, orchestral feel.

This being a live recording, the sound quality isn’t perfect. Zumbi shouts some of his lines, there are a couple off key notes from the singers, and the drums and trumpet threaten to drown out the emcees at several points. However, those imperfections are more than compensated for from the energy and intensity of the performances. Listening to this album I was reminded of the power of live music. Even listening to it six years later in the comfort of my living room, I found myself getting caught up in interplay between Zumbi and the musicians.

Set closer “Human Being” is a great illustration of what live instrumentation brings to Zion I’s sound. The album version of the song full of pulsating electronics. They still use a synthesizer, but now the crescendos on the song are brought from the pounding drums and the whole band vibing on each other. The song ends in an extended jam between Dame Taylor on drums, Vivica Hawkins vamping on the vocals, and the synthesizer.

“The Rapture” shows the breadth of what Zion I was capable of, from post-hyphy club bangers like “The Bay” and “Hit ‘Em” to more melodic tracks like “Antenna” to the more dance-oriented tracks like “Human Being.” They were never content just being backpack rappers or making club rap. They experimented with different sounds and different genres, and managed to make their own stamp on all of it. Zumbi’s flow is confident, his rhymes always on point, splitting the difference between conscious rap and party rap.

For those mourning the loss of Baba Zumbi, “The Rapture: Live From Oaklandia is an excellent way to celebrate his life and career. It’s a greatest hits collection that gets new life with the addition of a live band and makes you feel like you are in the sweaty club with them. Rest in Peace, Zumbi.