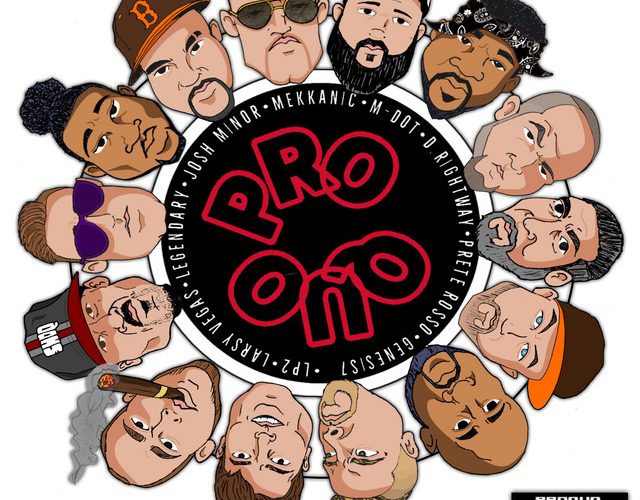 What do two Massachusetts-bred men, a college professor and a postal worker at that, possibly have in common apart from a shared home state? In the case of Professor Lyrical and Quokane, they both can rap. Coming together like Voltron as ProQuo, the MA-based duo’s hip-hop webcast “The ProQuo Show” has culminated into a full-fledged album. Inspired by the isolation induced by the pandemic, the duo has decided to showcase their spin on boom-bap (which they’ve dubbed “new bap”) and enlisted producers who they feel go hand-in-hand with that style. To differentiate, Jay “Quokane” Cruz has a gravelly voice which sounds well-honed from street battles. Pro is unmistakably Massachusetts. He’s got a cadence reminiscent of a younger Esoteric and a rhyme flow similar to the New England rappers in those Grind Mode Cyphers. Calling their album “iNSTANT BROTHERHOOD” implies that they had an instantaneous chemistry when they met. How does that translate as far as the music goes?

Except for about one-third of the album, ProQuo’s debut comes with plenty of assists on the mic. Some start off swinging, like on “Dive In It”. A double-time flow is launched courtesy of rapper H.3.N.D.O. as the first shot out of the gate. Pro and Quo also make use of the double-time flow as reversed sonics comprise the beat. On the piano-driven “Freedom Corner”, F.L.Y. (Forever Lives Yahweh) hits the last verse and has a more unique flow than ProQuo. With “StereoType”, producer (D.RightWay) also has a verse in his upbeat creation, while the Mekkanic-produced “Gravity” is more layered with sounds. Flipping the double entendre of the term “hold me down”, Pro uses some slick wordplay related to gravity to make his point about being pulled down. The first single, “Final Fire” is that “new bap” sound they’ve espoused. Produced by Dutch beatmaker Larsy Vegas, Quokane emphasizes the duo’s leitmotif of “Quotables over punchlines, call the ambulance”:

The title track’s most stand-out aspect are the thumping drums and some nice DJ scratches mostly. “Grandma Stories” has a melodic hook which makes use of both male and female vocals. Lyrically, it’s autobiographical for both emcees about the deaths of their respective grandmothers. I like the samples used in the celebratory track “Chandeliers (How We Do)” and on “I Wasn’t Nothin’”, producers M-Dot and LP2 make good use of some boom-bap drums with a chopped-up gospel choir. Now the track “New Bap” is exactly that. With its dusty drum snares, it’s less polished than the other tracks, even the lead single:

To start off the final third of the album, “He Prays” is a head-nodder for sure. F.L.Y. provides another verse, praising himself for never succumbing to the (pun-intended) trappings of a trap rapper. “The Devil’s Dancin’” is pretty dark and gloomy, unlike what we’ve heard from Larsy Vegas’s productions thus far. It’s got foreboding piano keys, menacing vocals, and then it switches to a generic trap-sounding track in the last minute. “Baggage Claim’ stands in contrast as it’s bouncy and more light-hearted. “Apologize” is an ode to hip-hop music, as well as coming to terms with it in light of the growth in their personal lives. The closer “Buy Buy (Even More Live Remix)” is essentially a “kiss off” to haters. In closing, I’ll say that “iNSTANT BROTHERHOOD” isn’t every underground hip-hop head’s cup of tea, but it’s adequately flavored nonetheless.