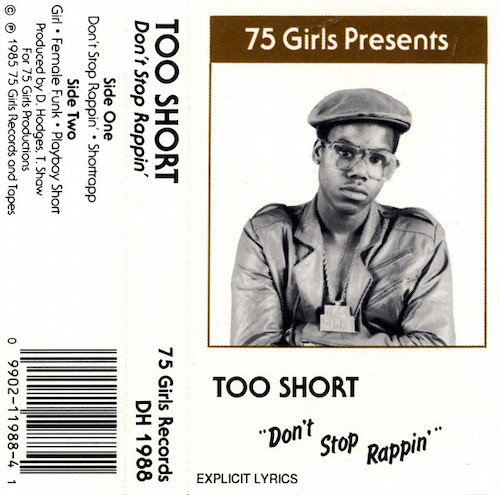 Is an original copy of Too $hort’s “Don’t Stop Rappin’” on 75 Girls Records and Tapes really worth $900? I thought that was absurd at first until I went to Discogs to fact check the availability of this release. As I’m writing this review the users of that site report 204 people have it but 1,299 want it. Clearly demand exceeds supply to a large degree here. I can’t imagine why someone hasn’t figured this out and made a special Record Store Day edition. Even if they charged $25 or $30 for the reprint it would still be much less expensive than the current market rate it commands.

A funny thing happened though once Too $hort went from a local Oakland rapper to a national star on Jive Records — 75 Girls Records CASHED IN and re-released every scrap of Too $hort music they had. Perhaps if those same 1,200 people who want “Don’t Stop Rappin’” realized the entire thing was on the “It’s About Time” double CD, they’d reconsider spending almost a grand on a vintage cassette. Then again collectors are obsessive (I’d know, I’m one) so someone who wants every original Todd Shaw album is probably not going to settle for a cheap cash in version. Frankly I’d be afraid to play a tape that expensive if I owned it for fear it would snap, but I can spin the compact disc as much as I want and rip copies to my heart’s content.

It’s worth stating that even Todd Shaw has “re-issued” these songs in his own way, recording updated versions of “Don’t Stop Rappin'” and “Girl” as his career was firmly established. There’s a certain unmistakable vintage charm to the original versions compared to the big budget, major label productions that would come later. Early Too $hort was selling his raps right out of the trunk of his car long before he became a rap superstar, and the simplistic drum tracks and keyboard synthesizers reflect the fact he was balling on a VERY tight budget.

Even his appearance suggests an entirely different era rapper than the man who made the word “bitch” his calling card. Leather jacket, applejack hat, and gold chain scream Fat Albert and the Gang at worst, or pre Run-D.M.C. at best. Even the raps on songs like “Female Funk” seem like prototypes for what Too $hort would become compared to the finished version that gained a cult following and went on to be a major success.

For that reason I have to say that if you’re going to buy “Don’t Stop Rappin'” because you have to hear every Too $hort song ever, buy the cash in version and not the expensive ass cassette. You’ll get the entirety of this album and all of his other 75 Girls music for a substantially lower price. In the grand scheme of his catalogue, early Todd Shaw raps are what helped him become a breakout star locally, but none of the songs here capture the public imagination the way “Freaky Tales” would on “Born to Mack” just a few years later.