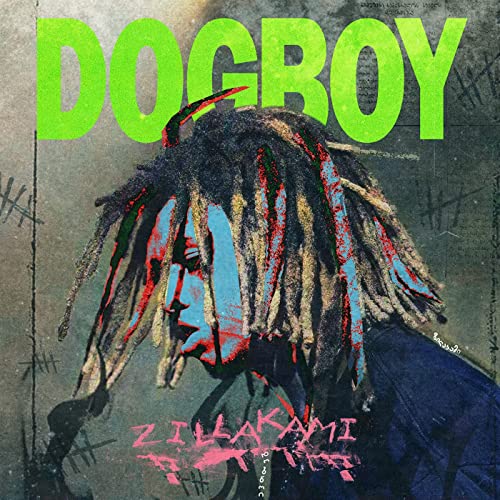 Until now the closest we came to reviewing City Morgue was a casual reference to rapper ZillaKami in a Denzel Curry review. Therefore it’s only appropriate to start this review of “DOG BOY” by catching you up on who they are so you’ll know who Zilla is. Pre-2017 Zilla was allegedly a ghost writer for 6ix9ine, and when 9ine refused to pay for the work, Zilla started dishing dirt on all of 6ix’s previous foul deeds. He could easily have spent the last four years beefing with the notorious rapper, but took things in a more positive direction by linking up with SosMula to make a heavy metal rap band. City Morgue is what the Judgment Night soundtrack imagined rap could become and what Ice-T earnestly tried to make happen. On his solo album “DOG BOY” ZillaKami has not strayed from this sound one bit.

“I, hate, everybody! I, hate, everyone! I, hate, everybody! I, keep, fucking up!” The sound here is all about NOISE. The bass is so loud here that it would make Masta Ace do a double take. The guitars are crunchy, ZillaKami is screaming his vocals into the mic, and there’s a palpable feeling of anger oozing out of the air. “What are you rebelling against Zilla?” The answer would be “Whaddya got?” Zilla hates himself, hates you, hates society, and hates anybody fake. “Yeah okay, I don’t ever miss/How the fuck a comment make you delete your whole shit?/Yeah okay, maybe you a bitch/How the fuck you let my homey bust your fuckin lip?” Some may listen to “BADASS” for the Lil Uzi Vert cameo, but Zilla’s angry enough for both of them.

City Morgue has been compared to both nu metal and grunge rock, and it’s easy to see similarities to both on “DEDGRL.” The song is short (under two minutes) and the percussion sounds more like an unreleased Nirvana song than a rap track. That feeling is only exacerbated by “FROSTY,” a track I could for all the world believe was produced by Butch Vig. It has that same watery alternative rock sound as tracks like “Lithium” and “Come As You Are.”

Zilla combines all of his different influences in the song “NOT WORTH IT” and accompanying video. Skateboarding, street fighting, wailing guitar riffs, and an unbelievable amount of self-deprecation fill the short space of this song. “I can’t be the center of attention because I’m not that cool.” Ironically Zilla, you are. “Everybody loves me, but I don’t deserve it … I don’t even know my purpose.” I do. Your purpose is to make crunchy rap rock.

As much as I enjoy ZillaKami’s solo effort I’d be remiss to not tell you it gets a little repetitive despite the overall short length. If the album or its songs were any longer, it might go from repetitive to annoying. If Zilla is happy to eschew the traditional sounds of sampling, turntables and drum machines to go this route, why not go further than anyone else has gone before? Make a speed metal rap song. Do some emo screamo like the late Chester Bennington. How about a tribute to The Ramones? Zilla may seem like he hates himself, but I get the feeling he’s also proud of being a weirdo and an outsider to rap tradition, and in that case he’s got the creative freedom to push it to the fucking limit and well beyond.

“SPACE COWBOY” is an apt finale for “DOG BOY” as it hints at the potential for Zilla. It combines that rugged metal sound with some very personal story telling and catchy riffs that sound good on repeated listen. While some tracks on this album come across like noise that accidentally became a song by giving it structure, “SPACE COWBOY” goes the other direction as a song that accidentally became noisy af. It’s fair to say this isn’t for everyone, because even obvious comparisons like Death Grips don’t quite fit (and quite frankly I like Zilla more). What I hear from Zilla on this album could either kick start a musical revolution or fizzle out into obscurity and I’m not a good enough prognosticator to say which — but I’m sincerely hoping for the former and not the latter.