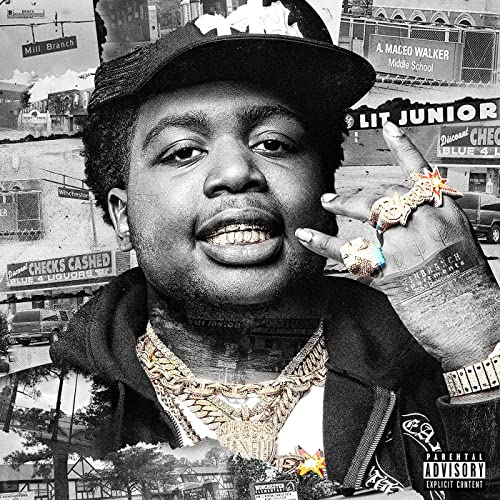 Rodney Lamont Wright Jr. a/k/a BIG30 is all about his iced out jewelry. His ice is so cold he’s constantly shivering on “King of Killbranch” and he isn’t at all apologetic about his wealth on “Backseat of the Rolls Truck.” “Drop a bag on yo’ head, kill you, then buy myself a Tesla.” “Ain’t too many niggaz rich as me.” Mr. Wright, I commend you on your financial success, but unfortunately you’re going to need that money for your attorneys. He was arrested earlier this year on federal drug charges, so even if he beats the rap it might warm up the temperature a little bit. It’s hard to keep buying ice with that much heat on you.

As the song “Free Shiest Life” indicates, BIG30 made his name by getting a cameo on a Pooh Shiesty track, so Mr. Wright is advocating for Shiest to be released from jail even as he deals with his own issues. That’s loyalty. That’s also indicative of a problem endemic to the present rap scene — rappers catching charges almost as fast as they catch record deals. There used to be at least some kind of pretense of getting out of the life by making it in the rap game, but of late it feels like rappers think they need to keep trapping even after getting a deal just to keep their credibility. The word “trap” itself ought to be its own indication of why that’s a bad idea, but no up-and-coming rapper is gonna listen to that from anybody let alone me.

“King of Killbranch” is exactly what you’d expect from any of the guests on his album — Moneybagg Yo, Future, Yo Gotti, et cetera. BIG30 has it all — the wealth, the firearms, the whips and the women. He’s “Too Official” so “don’t get it twisted” or you might become his enemy. There’s no doubt the Memphis rapper is as legit as his accent. With or without the charges he’s facing his credibility isn’t in question here. This is the question — what does BIG30 add to the music scene? He’s saying what other hard rappers from Tennessee say. He’s talking about the same things other grimy emcees in other parts of the country too. Everybody talks about their ice, their guns, their Euros and their bad bitches. What makes BIG30 unique?

I don’t have an answer for you. So far as I can tell the most notable thing about BIG30 is that he doesn’t AutoTune or sing, although Future is more than happy to do it for him on “Whatever Come With It.” BIG30 is certainly well connected. Besides the guests we’ve already mentioned, he’s got Quavo from Migos on “Pressin'” and drill star Lil Durk on “Miss My Glock 26.” The production is par for the course on this sort of album. It’s as polished as all of the blind that he has, but it neither raises him up nor drags him down. Releasing a single as a music video is the same as releasing any song from this album as a single. Other than the guest stars they’re interchangeable.

Like I always do about this time, I’m going to give my best regards to Mr. Wright in my hopes that he beats the charges he’s facing. This country already has too many black men behind bars, and we certainly don’t need BIG30 to increase the population. It may even be that he was set up by the police and it’s all a conspiracy. You might say that’s far fetched, but history tells us that it’s happened before and can happen again at any time. Even if BIG30 was living a totally clean life, completely the opposite of everything he raps about on “King of Killbranch,” some jealous rival could drop a dime on him for things in his past before he made it as a rapper — that happens all the time too. Unfortunately the deck has now been stacked against him because federal charges are some heavy shit, so good luck to the young man. If he beats the case he’s got a future on the regional circuit, but I’m going to be honest when I say that I don’t see where he goes beyond that.