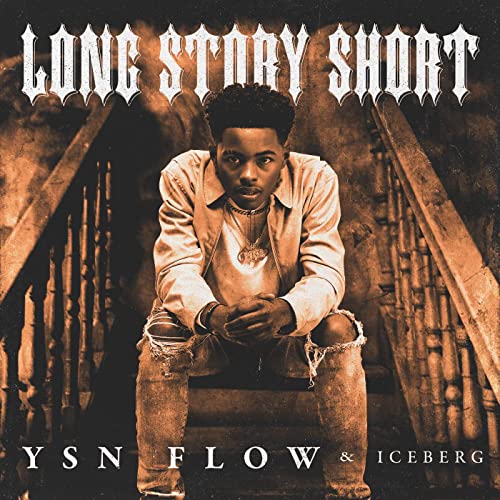 Back in May when we were in the midst of the first “pandemic surge” in the USA (people in the future are really going to trip at what a mess 2020 was) I got my first taste of YSN Flow. At first glance I was pleased with the level of poise he showed as an artist while just a teenager, but closer examination made it hard to discern how he stood out from the artists he admitted looking up to — NLE Choppa, 6ix9ine, and so on. When everybody else is doing rap songs with pounding beats and pitch corrected (AutoTune) vocals, you wind up just being one more rap singer/singing rapper on the pile.

“I’m, too, hot to be playin’ it cool” vows Kamron Ford on the lead single from his latest effort “Long Story Short,” although “Playin’ It Cool” also hints that Mr. Ford IS changing things up a little this time around. The new album is co-credited to rising L.A. producer Iceberg, which makes the song’s title a double entendre of sorts. His biggest success to date is the platinum Polo G single “Pop Out,” but that’s likely just the tip of the ice… oh yeah. If you enjoy the bass and croon tune, there’s little doubt he understands the formula and how to work it. The two combine to continue YSN’s “Want Beef?” series, which has reached “3.0” like an OG version of Windows.

“Young niggaz throwin up sets
Bitch, I don’t reach for my chain, that’s a threat
I guess money make broke niggaz hate you
I heard that I’m beefin with niggaz that I ain’t even met”

These are familiar refrains for YSN Flow even without the song being a sequel. We may be at a point in human history where there’s nothing to be said that someone hasn’t said somewhere before, but even within those limitations YSN rarely strays from his comfort zone to TRY and find different topics or different ways to say them. I can understand why a young man with a whole lot of jealous envious haters would make a song called “Fuck You,” but hip-hop is replete with tracks that have that same title and express that same sentiment sans singing.

Ironically one of the things I liked about “Flow $ZN” was how the young man shared the spotlight with other artists like Quando Rondo, YSN Jayo and Lil Tjay. Perhaps the slightly older and slightly more embittered Flow is literally saying “fuck you” to the industry on “Long Story Short” by not having any guests this time. It may also be that by giving Iceberg co-billing (and presumably an equal share of the royalties) he simply didn’t want to cut a small slice of pie into even smaller pieces. The easiest explanation is probably the right one though — with Iceberg at his side he really doesn’t NEED anybody else. Even songs that tread familiar paths lyrically like “Roll Off” are pleasant enough to listen to in an “I can keep this on in the background while playing video games” kind of way.

At just over 32 minutes long “Long Story Short” mirrors its predecessor in both size and scope, meaning that Mr. Ford has dialed in the exact amount of time one would want to enjoy him in one sitting. Since Del once rapped that “emcees should know their limitations” I’m certainly not knocking YSN Flow for being that self-aware. In fact it strikes me now just as it did in May that he knows exactly what he’s doing down to a tee, and that he views hooking up with Iceberg as the next step on his road to success. I can’t say that for certain any more than I can say ANYTHING for certain in 2020, but until he wears out his welcome he can probably recycle this formula with a rotating list of recording maestros. Kenny Beats. DJ Mustard. Tay Keith. Etc.