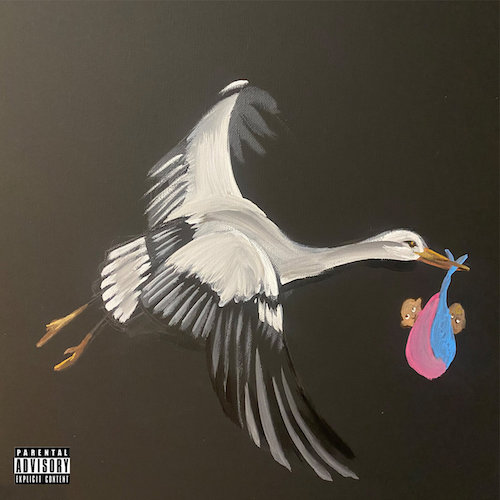 There is a long and storied history in Hip Hop of rappers with funny voices. One of the first Hip Hop songs I heard was Newcleus’ “Jam On It,” which featured a sped up chipmunk voice. Then there was “Square Dance Rap,” which sped up Sir Mix-A-Lot’s voice. The Beastie Boys had Ad Rock, Public Enemy has Flava Flav, and Cypress Hill has B Real, all of whom realized that sounding funny was more effective for them than sounding hard. The real king of funny-voiced rappers is arguably E-40, who has made rapping in an exaggerated white nerd voice into a decade’s-long career. He’s got some competition with Detroit rapper Bruiser Wolf, a Detroit rapper who sounds like he is channeling Dolomite on his debut album, “Dope Game Stupid.”

Bruiser has a sing-songy, exaggerated flow with a slightly high pitch. Like E-40’s flow (or Bruiser’s fellow Bruiser Brigader Danny Brown) it can take a little adjusting to, but his skills on the mic make it clear that he is not just a gimmick. Bruiser is wickedly funny, and “Dope Game Stupid” is full of brilliant rhymes and one-liners. “Hit your bitch by mistake, now that’s a freak accident,” he raps on “Freak Accident.” “There’s nobody at your concerts, you should hang it up like artwork” he mocks on “Bottles of Anejo.”

There is also some intense sadness underneath all of the braggadocio and humor. On “Use Me (I’m Dope)” he’s bragging about how dope he is, but also talking about being actual dope and feeling used up. Throughout the album he wrestles with the pitfalls of drug dealing. On the title track he admits “The dope game’s stupid, but the boy still do it.”

Nowhere does the album dip into sadness more than on album closer “Momma Was a Dopefiend,” where Bruiser talks about growing up with a mother who struggled with addiction.

“My mom was a human consuming dog food
Tried to hide it but we all knew
Her nodding off was a clue
Confront her, she wanted to fight, fuss and argue
It was the same movie, but no part two
The source of my anger, I love, I hate you”

The second star of “Dope Game Stupid” is producer Raphy, who makes deft use of samples to create beats that sound like they came from a modern-day Blaxploitation film. He produces almost all of the tracks, and his soulful yet hard-hitting beats work perfectly with Bruiser’s exaggerated flow.

Bruiser gets some help with Danny Brown, who executive produced the album, Apropos, Fat Ray and J.U.S. They offer some contrast to Bruiser’s unique flow, but he is just as effective when he is on his own.

“Dope Game Stupid” celebrates how drug dealing has lifted the protagonist out of poverty, while wrestling with the damage that the game causes. Bruiser Wolf’s flow, beats, humor, and skill on the mic elevate what could be standard drug raps into one of the better albums to come out this year.