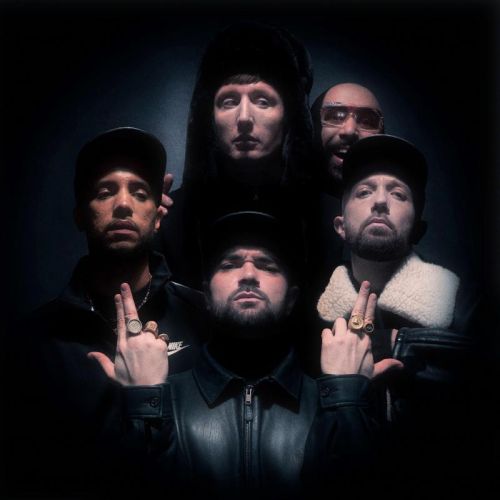 The UK has had an interesting relationship with comedy and rap. There have been stunts like Scottish duo Silibil N’ Brains posing as Americans who ended up getting signed and supporting D12. There’s Doc Brown, a legitimate emcee who emerged in Poisonous Poets that transferred successfully into standup comedy. Recently we have had pensioners Pete & Bas doing drill and while often funny, ended up being better than most serious artists. The common theme is that you have to be genuinely talented to pull it off – rarely does a comedian go the other way and just start rapping.

Enter Kurupt FM, the fictional pirate radio station featured in the popular sitcom People Just Do Nothing (PJDN). For the uninitiated, PJDN is a mockumentary very much a child of Ricky Gervais’ influential series The Office – the cast have noted this is a key influence on their comedy and Martin Freeman is a fan of PJDN himself. Set in Brentford (West London), it follows the deluded MC Grindah and his friends DJ Beats, Decoy, Steves and Chabuddy G. Most are in their mid-30s and clinging to the UK Garage scene, a hugely popular genre in the late 1990s to early 2000s, but the type of music that was usurped by grime and house. The era of So Solid Crew and Roll Deep. It’s a period that many British people my age remember fondly, as it was full of big summer anthems and carefree emceeing. Radio stations like KISStory exist purely to keep that nostalgia alive. PJDN similarly leans into the 2000s as a period many Brits in their 30s and 40s may remember fondly, and certainly explains some of the success behind other BBC comedy series This Country and Ladhood.

Garage never died, it just went underground. Many grime heavyweights have their roots in garage (see Kano’s “Garage Skank Freestyle”) and poster boy for the genre, Craig David, even returned to the charts in 2015 with “When the Bassline Drops” alongside Big Narstie. PJDN has been a bit of a sensation, given Ed Sheeran and Post Malone have made celebrity appearances with Kurupt FM, and just this year saw the release of a PJDN film called “Big in Japan”.

The lead single “Summertime” actually sees Craig David return with what can only be described as a typical Craig David number that captures that warmth and positivity of those classic garage tracks from twenty years ago. The video, much like the show, frequently highlights just how crap the reality is that sits behind the glamorous imagery.

Big Narstie appears on “Blaze It”, an ode to the blunt with a psychedelic mashup of Styles P’s “Good Times”. It’s a bit messy, but a lot of fun. That often sums up Kurupt FM’s music; the big-budget undoes some of the raw pirate radio origins but helpfully masks any amateurish moments. Which are surprisingly rare! MC Grindah holds down the bulk of the rhyming, with DJ Beats occasionally filling in a bar or two. If you’ve watched the show you’ll know that Beats is constantly in awe of Grindah – he’s his biggest fan – and the track “Letter to Grindah” captures that obsession that ultimately holds Beats back from being his own man.

Any doubts over Grindah’s abilities are laid to rest, given he’s got Jaykae and D Double E on this album. In fact, he held his own on stage with the likes of Viper, Jamakabi, and Bruza; even going toe-to-toe with legendary drum and bass emcees Shabba D and Skibadee.

This deep appreciation of garage is replicated on “Your Mum Loves Garage” which splices in numerous famous lyrics from classic garage anthems. The concept is also a reminder of how popular garage was with women owing often to the club-friendly (and radio-friendly) nature of many of these songs. As popular as grime is, it’s not quite got that chart-topping mass appeal that a “Boo” or “Bo Selecta” did.

There are a few tracks that have modern, grime-style production and they still suit Grindah’s rapid-fire delivery. Rude Kid produces “Neva Bin”, probably the most authentic of the bunch, channeling Lethal Bizzle’s “Pow!”. “A Million” has a nasty beat, but the hook lets down what could have been a similar crowdpleaser. There’s not a lot wrong with “Greatest Hits (Part 1)” other than it’s reliant on either being familiar with the TV show and having grown up in England in “’98 to 2001 – the golden era” as Beats and Grindah put it on “Original Rudeboyz”. It’s that Ali G era, but without ever feeling like it’s secretly laughing at rapping.

PJDN is designed to have the viewer laughing AT MC Grindah, yet he’s had the last laugh. He’s fulfilled his obscene boasts of being a great emcee by putting out a solid selection of songs that, if you didn’t know this was spawned from a comedy show, could sit alongside straight-faced emcees. It’s also shone a light on just how enjoyable UK garage and drum and bass was, and can still be in 2021.