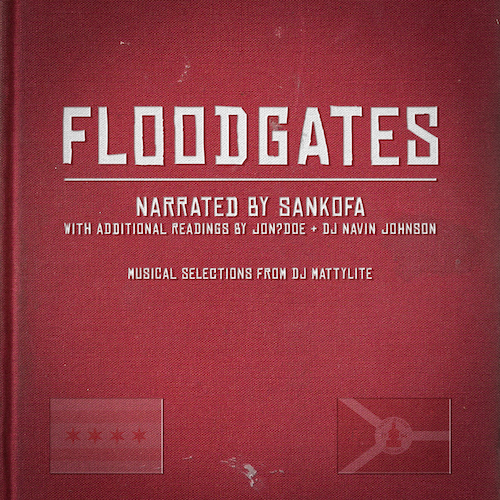 If this is your first introduction to Sankofa, let me give you the very abbreviated history. We’ve been following the Fort Wayne, Indiana rapper since the mid-2000’s, he teased retirement in the 2010’s, but he’s still going strong in the 2020’s. The latest chapter in his saga is “Floodgates” and while physical copies are sold out at Bandcamp, you can still pick up a digital distribution via the merchant of your choice. Do you want to though? Well dear reader, that’s why you’re here, and that’s why I’m here. Let’s find out.

This entry in the Sankofa discography is produced entirely by DJ Matty Lite, and he provides a harrowing backdrop for the lead single “Dali Rolex.” I don’t know if he intentionally programmed it to be a throwback track, but the way it shifts loops and scratches in hooks creates a very Dr. Octagon quality I enjoy. It’s a murky, sinister form of boom bap that is appropriately matched by Sankofa’s bars. “I’m not paranoid, I’m careful, watching plans unfold beneath me.” This is rap music to set you on edge, with a palpable feeling of tension breathing through every beat and rhyme.

“This that Ice-T, Ice Cube, put you in a foul mood/you against the world forever, when the sounds move.” On second thought the throwback style of “Floodgates” is very much on purpose, as evidenced by the menacing title track and shout out to Cali rap legends. “I’m leaving microphones crushed until my bones rust.” There’s an undeniable energy to the sound found here, one which if ripped to a .wav file and examined visually would look like a big middle finger. I shouldn’t speak for the man because only he knows his heart and intentions, but listening to Sankofa spit one gets the impression he’d rather commit seppuku than ever let his vocals be AutoTuned.

“Between utterances you can see the sneers captured/Regret the only thing I hold inside this clear chapter.” I take Sankofa’s words at face value on “Napalm Throne” but as a lyricist he’s holding nothing back here. “Why did I even bother man?” Because some people have a well of creativity bubbling up from deep within their soul that has to be let out periodically. Failure to do so would make their spirit whither and die, and while it certainly doesn’t hurt to make a living from your art, Sankofa raps with the urgency of a man who can’t survive unless he gets the lyrics weighing him down off his chest.

There aren’t many cameos on this short album, but DJ Navin Johnson provides scratches throughout, while San Luis Obispo emcee JON?DOE comes through on the bloody “Razor Blade Suit.” He’s arguably playing to me as a review by dropping references to Andre the Giant and the Kwisatz Haderach, but if those are your pop cultural touchstones too then he’s dropping bars for you as well. “Floodgates” doesn’t rely overly hard on your knowledge of the references within, but it does assume a love for incredibly heavy beats and rhymes. “We don’t come to rock mics, we mutilate them.” This is unapologetically aggressive rap music, pissed off at the state of the world and the mediocrity of many emcees, and even if you didn’t know you were mad when you hit play you will find it to be a cathartic experience.