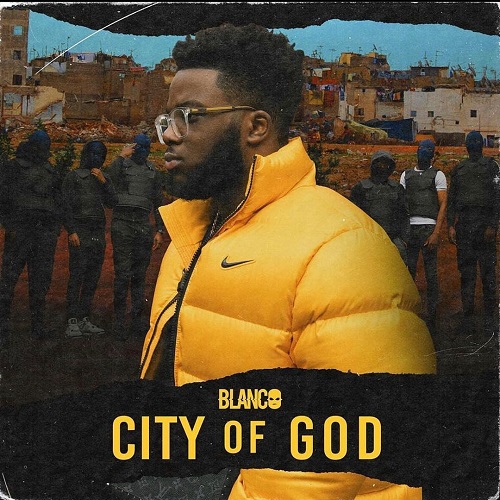 Let’s go for full disclosure here. I came across the project at hand by accident because I assumed it to be by Bay Area artist Blanco whom I covered for our site before. Research on online platforms and services suggests the last time the world heard from that Blanco was the same time I reviewed “Molly & Amber”.

With that out of the way, our undivided attention goes towards South London MC Blanco. Emerging with UK drill collective Harlem Spartans, he began to focus on his solo career after a stint in jail, opting for a more subtle and playful approach. Of Angolan heritage, he has a soft spot for Brazilian baile funk, which shows in the titular reference to ‘Cidade de Deus’, the highly successful 2002 film set in the bairro of the same name in the west of Rio de Janeiro.

Musically, “City of God” may be even further away from baile funk than from UK drill, instead there’s an individual touch in the musical tapestry provided by The Elements, LiTek, iLL BLU, Alexay Beats, Tyrell 169 and T Morgan. Blanco’s fondness for manga and anime makes itself felt early on when opener “Pain” samples from the series ‘Naruto’. The sky clears up after this dramatic opener with melodically simple but rhythmically supple beats, an early highlight being the link-up with Central Cee on “The Great Escape” that is flush with wordplay and references.

Rap fans should never be taken aback by lyrical content that is too obscure, too personal, or too foreign for them to fully understand. At times it may seem like Blanco can only express himself through pop culture metaphors (football and anime in particular), but the concept is almost as old as rap music itself and like the genres it borrows from it adds color to a song’s content. There may even be those who prefer unorthodox references (song title: “Asura & Indra”) over more common ones (song title: “Dennis Rodman”). Either way it takes a great deal of insider knowledge to interpret Blanco’s rhymes. With so much information at one’s fingertips nowadays however, practically anyone can set about deciphering verses like the allusive “Pain”:

“Throwin’ up hand signs, I’m like Madara
Legendary swordsman, Latz was Zabuza
Bae watchin’ cah I want that Pamela
Bro with a Pressa, it ain’t from Canada
Red in my eyes, Rin’negan, no Sharingan
She want a milkshake, takin’ it Farringdon
Guys on your block Bear times, no Paddington
Had one in Dulwich and New Addington
Great Ninja War, just veterans
You know de Ligt, not in Netherlands
No Bale long-shot when a Karius
Came with a Ratchet, Dr Nefarious
One foot out the mud, precarious
And I got haters, think that’s hilarious
Toxic, she Sagittarius
Car horsepower, bring in the chariots
Sittin’ in pain like I fractured my shoulder
Wap in the cab, not Ola
Black seein’ red like the flag of Angola
Still in estate, Minnesota
In the field, no agriculture
Bro’s in the can for the coke, not Cola
Jakes in the rear, Lookman Ademola”

With at least two rapping members of the Harlem Spartans dead and others sentenced to jail, Blanco wisely evades the lure of keeping it too real in his music. That’s what “The Great Escape” is ultimately about. Finding refuge. A sentiment Ice-T bluntly put into song form 30 years ago with “Escape From the Killing Fields”. In any case, his heart and mind are still attached to a past not so far behind, so naturally he brings up certain episodes that shed a light on the sad realities of juvenile violence and delinquency in London and other cities, in Blanco’s case through the colorful lens of good old upbringing in front of the television screen. But certainly not at every turn; sometimes he puts things unceremoniously, like when he discloses how he’s haunted by the memory of deceased friend: “If I say Biscy [once] more, he’ll appear / And I got demons that won’t disappear”. Elsewhere, he notes the irony of an imprisoned mate checking on his well-being. He has an eye for perturbing details (“Wrigglin’, cah the handcuffs too stiffenin'”) and a sense for the responsibilities of adulthood (“Need a lifetime of achievements”). And just as a teaser of Blanco’s wit, consider the analogy “in a bad state like Americans”…

The truly compelling quality of “City of God” is how Blanco exorcises his demons with style and smoothness. “TSG” and “Time Out” both unmistakably refer to street scenarios, yet they move along with grace and jest. Feel free to speculate if it’s intended or not, but Blanco’s performances on “Surveillance” and “Too Late” come aross like updates on Biggie Smalls or Black Rob. Music has moved on, though, so “Surveillance” is strongly marked by the presence of Afroswing group NSG.

Grand gestures are not Blanco’s thing. But with his modest yet creative angle we might well be witness to a future UK great. Individuality is in high demand these days, and Blanco delivers plenty of it. No rhythm puzzles him as he effortlessly navigates barren backdrops like “Magneto” and cozy outfits like “Shippuden” with his laconic tone and animated flow. There’s room for improvement in terms of presence and hooks, but for a debut ‘mixtape’ (no idea why the Brits persist to use the term), “City of God” is quite a promise.