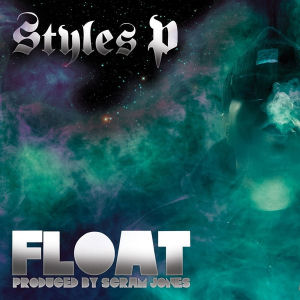 “Float” is certainly short, but there’s nothing sweet about this release. With Styles P records you know what you’re getting, a relentless barrage of machismo spliced with black humour. His last project was one I enjoyed but ultimately wanted more from, as it was only ten tracks deep. “Float” is marginally longer, but with Scram Jones producing the whole thing, there isn’t any chart-material here. This is that New York rap that flips the bird at any censorship issues the radio may have. Musically, there are a few moments of greatness where Scram keeps things simple on “Manson Murder” (featuring a typically stupid verse from Nore) and “Hater Love” brings some much needed life to proceedings. The dramatic “Intro” benefits from intense strings and dope scratches that really should have been applied on more tracks, because as hard as Styles P’s raps are, they get monotonous if the production isn’t up to par. And there is an unhealthy proportion of average beats being served up by Scram Jones, lending “Float” an almost dated feel.

What sets “Float” back the most is Styles P himself, with raps that are predictably hardcore, but devoid of any intelligence or irony. The cursed â€˜seriousitosis’ is evident more than ever, which Styles has always flirted with but usually spices up his verses with a threat or claim of superiority that is so ridiculous that it becomes tongue-in-cheek. It’s the reason he has always been my favourite LOX member, the fact he is SO hardcore that his lifestyle is probably impossible. It’s just a shame that he is spitting hot garbage like this on “Red Eye”:

“I go with it, I’m so with it
First class flight overseas, I’m low with it
Stretching out the chair, we ain’t low in it
Thinking of a house in Cali, can I grow in it?
Throw a booth in the place imagine how I flow in it
Outer-space bars, OZ’s to the face y’all
Ball, bottle, hot tub, in case y’all
Plush life, laugh a lot, smile a lot
Light it up, bottle pop
Blowing kush from San Diego to Ottowa
A long way from the days I used to bottle up
Keeping all of my feelings bottled up
Keeping all of the guns hollowed up
Now we getting rich, getting twisted like Oliver”

It’s no surprise to find features from Sheek Louch, Nore, Jadakiss and Raekwon, all four at a similar age, yet all rapping about things you’d like to think they did when they were younger. Smoking weed and having one-night stands all the time is easy to digest when delivered creatively, or backed by humour (which artists like Sean Price and Redman have mastered), but knowing that these guys are in their 40s and have children, it sounds well, a bit sad. Minus the niceness of “Manson Murder” and “Hater Love”, this should have been a mixtape as it isn’t a patch on any of Styles’ previous LPs.