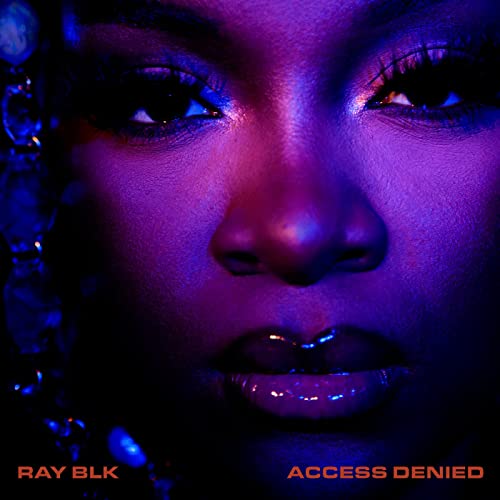 “When I was younger wanted to be the black Madonna on stage/millions of people screaming my name/but now I’m older I can do anything I wanna.”

Rita Ekwere b/k/a Ray BLK has been steadily making a come up since 2015 when she released her first EP. Two years later the BBC crowned her the winner of their “Sounds of 2017” award, the first ever unsigned artist to achieve that honor. Despite that rapid ascent BLK stayed away from putting out a full length album on a major label, preferring to release mixtapes and drop collaborations with the likes of Stormzy and Giggs among others. She’s been patiently biding her time until the moment was right to deliver that big mainstream release, and that time is now with “Access Denied.”

It probably goes without saying that the Nigerian born, London raised BLK has a UK twang to everything she does, but let’s say it anyway. Since she alternates between singing and rapping you could miss it at times, but when Giggs returns to collaborate with her on “Games” the vibe comes through loud and clear. Even though Nana Rogues produced the track, I could have been fooled into think it was an A$AP joint, complete with the syrupy backdrop and slowed down “UH!” interjections. I suppose that only goes to show how interchangeable the sound is “across the pond.”

Speaking of which “MIA” borrows a singer from Dallas (Kaash Paige) and the same DeBarge “Stay With Me” sample that Biggie made famous on the “One More Chance” remix. It’s not a direct one to one copy of the way Bad Boy looped it, but if you’re of a certain age or have a certain fondness for 1990’s rap music you couldn’t possibly miss it. The ADP produced track is mesmerizing as a result, and BLK could easily be mistaken for a pitch corrected artist from the states — only she’s not. That’s not to say her vocals aren’t being played with. They echo, reverberate, and rebound off the walls of the editing suite, but the actual crooning and bars are all hers.

“I just got a bag like I stole the loot
We should blow it all, we should make a move
Cover up the tracks, don’t see the route
Sex feels better when we’ve got a view”

It shouldn’t feel revolutionary to celebrate “Dark Skinned” beauty coming after a full decade of Black Lives Matter let alone the summer of 2020, but it’s still powerful to see all of the people Ray BLK solicited to submit their videos featured in hers. I’m not qualified to speak on how meaningful this is given my own absence of melanin, but it does suggest that Ray BLK is seizing this moment to not just release music but build a movement, and it’s beautiful to see. We should celebrate every shade of blackness and not just the ones that Hollywood and television have perpetuated as accessible.

Ray BLK’s embrace of dancehall on tracks like “Over You” is aimed more geographically at her breddern than some of the other tracks on “Access Denied.” For me this is in keeping with the diaspora nature of what she’s putting on though, reaching out to different sounds of blackness be they American, European, African or Caribbean. She doesn’t quite make the full leap to being pigeonholed as “world music” though because songs like the title track make it clear she’s keeping true to herself even when social media’s negative attributes rear their ugly head.

Some observers might feel we need a signal crossing to keep R&B and rap from colliding as often as they do in modern times, but for me at least an album like “Access Denied” blurs those lines in a positive way. I admire how empowered and unencumbered Ray BLK is, taking her time to release this album the way she wanted, choosing her own lane and not being forced to speed up or slow down for anybody else. I think you’ll enjoy it too.