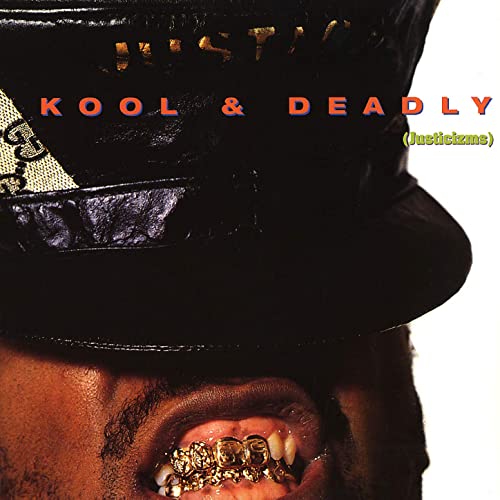 There’s no way to know what historians will say about you 30 or more years after an album. Joseph Williams Jr. b/k/a Just-Ice certainly couldn’t have predicted that “Kool & Deadly (Justicizms)” would be best known for a hip-hop meme, but that’s been his fate. On one hand it’s a tribute to a fact so many rappers have referenced or sampled the song “Moshitup,” and on the other Ice doesn’t even speak the words that became so famous. Co-producer and guest star KRS-One is the one who actually says “suicide, it’s a suicide.”

Honestly when I think of “Kool & Deadly” that’s even not the first thing that comes to mind. I’m always struck by the AWFUL cover art of the album. I realize that the point was to reflect Just-Ice being “a hip-hop gangster” as he often described himself, but that close up of his grill shows so much of his gums it’s actually nauseating. It doesn’t make him look tough, it makes him look like he needs to visit the dentist STAT. It would have been much more convincing to have him stand on any street corner in the Bronx brandishing a rifle or a semi-automatic weapon. That’s plenty “gangster” for an album cover. The other thing that always comes to mind is the other track that prominently features a KRS-One cameo — “Going Way Back.”

“The Bronx was the first, I know, I was there.” Just-Ice’s song ends up being an oral recitation of the history of rap in the Bronx, and Just-Ice makes it clear that “if I don’t say your name that means you were not there.” While you may instantly recognize legendary names like Kool Herc, Clark Kent and DJ Red Alert, everybody that Just-Ice name drops is just as important to him as part of a scene that birthed an entire musical genre. It’s damn near hyperlinks in lyrical form. Every line is another reference to click on, and you could spend a whole day going down the rabbit hole each one leads to. The only downside of “Going Way Back” is that it’s too short to tell each pioneer’s story. It’s a condensed history that in hindsight almost sounds like a braggart’s boasting. “You weren’t there, but I was.” Dropping names proves he knows the movers and the shakers, but it doesn’t tell us WHY they were so important. You’ll have to do that research on your own.

“I didn’t know what to write, but I sat down and wrote it.” The opening words to the first verse of “Lyric Licking” are why I have a love/hate relationship with this album. For those who don’t know HIS story, Just-Ice didn’t start out as a rapper — he was a BOUNCER at many of the same clubs as those pioneers he raps about. By virtue of his reputation, physique and trademark gold teeth, he became as famous as the emcees and deejays whose shows he ejected unruly hooligans from. It was inevitable that he’d befriend enough of those artists that he’d wind up becoming a recording artist himself, but other than talking about how “tough and cool and cool and tough” he is, Just-Ice never really has much to say on a track. His admission at the open of the song is refreshingly honest but proves there’s not much to him beyond his signature vocal tone.

“Freedom of Speech” is as close to a political or profound statement as Just-Ice gets… and it’s not close at all. The title has nothing to do with the song and never even gets mentioned on the track. The only “freedom” Just-Ice cares about is his own freedom to make records with KRS-One, whom he repeatedly credits as the producer behind his music. “You’re gonna get hurt/don’t get in our way, you better watch your step.” It’s a fun song to revisit and certainly a treasure trove of lines for a modern deejay to scratch, but I don’t think the ACLU will be calling him to defend the 1st Amendment.

“Kool & Deadly” is an important album, but not a classic album by any stretch of the imagination. While “Going Way Back” has stood the test of time as a single, the rest of the songs don’t have much staying power beyond the menacing delivery Just-Ice gives on the mic. It’s not hard to picture him bouncing people out onto the street from the tone of his voice alone. That results in the unfortunate fact that I have to give him an A+ for his presence on the microphone but a solid D for doing anything with it when given the chance. He was there and he saw it all, but he doesn’t actually tell you about WHAT he saw, and that’s a real shame.