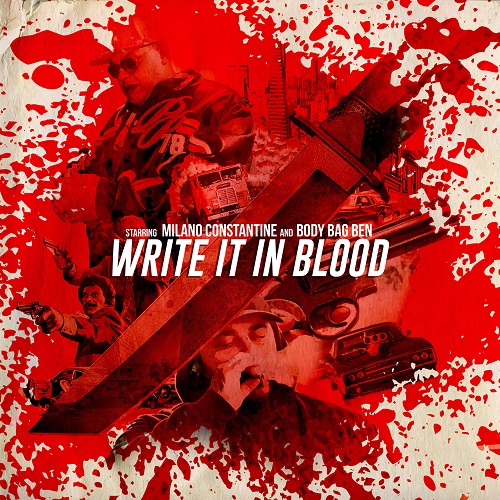 Milano Constantine and Body Bag Ben :: Write it in Blood

I don’t remember when exactly, it might have been towards the end of the mixtape era and DipSet mania, that East Coast street rap kind of a got a new start. Whenever something is back in style it enables some old hands to come aboard again. While Uptown’s Milano Constantine is by no means an absolute original like Kool G Rap, somewhere in this writer’s basement you would find his 2000 12″ on D.I.T.C. Records going by “Deal With a Feeling” b/w “Rep For the Slums”.

While no album immediately came out of the D.I.T.C. connection, Milano has kept in contact with some of the crew, the most fruitful outcome being the full-length “Boulevard Author” with Showbiz. Looking to solidify his later career, he’s created a lane of his own with several collaborations with Hus Kingpin and Smoovth and most recently DJ Swet from Spain. “Write it in Blood” sees him team up with producer/rapper Body Bag Ben. As Ben resides in California, this is a bicoastal affair that still doesn’t feel like a long-distance relationship.

Big Body Ben’s beats dip occasionally into the freewheeling aesthetics of his famous Oxnard neighbors Madlib and Oh No yet for the most part remain stuck in the musty underground street rap terrain of today. One notable feature is him grabbing a whole bunch of vocal samples from the same artists for individual tracks. Biggie (“Jesus Pieces”), Big L (“Jazz Cafe”) and the Clan (“Sobre”) are extensively quoted on the respective tracks. Otherwise the project feels largely uninspired. The album is already 7 tracks deep when they switch the rapping order and Ben goes first. Unless there’s a guest entry, the songs always have two verses.

Their references are overwhelmingly retro. The veteran’s last literally longer, see Ben’s “Puttin’ Heads to Bed like Percee P” versus Milano’s “Basquiat paint, Slick Rick La-Di-Da fame / My brother had the work, they blew up his SkyPage’ / Sold E-Z Rock to fiends, had ’em Rob Base, commissioned mob weight”.

“Write it in Blood” can be momentarily fun (like when Ben goes from dropping a Lil Troy reference to threatening to “snap a rapper like a wishbone”), but on a whole it feels purely functional devoid of insights or exploits. As a rapper, Body Bag Ben does his best to get in a line with Non Phixion offspring without revealing any higher purpose about his rapping self. His beats often sound the part but are sonically just not up to snuff. The sound is squashed, naively hoping the samples will play their part. The best offering comes at the very end with “Vicious”, also due to Supreme General shaking things up a little bit in the first verse. It’s too little, too late.