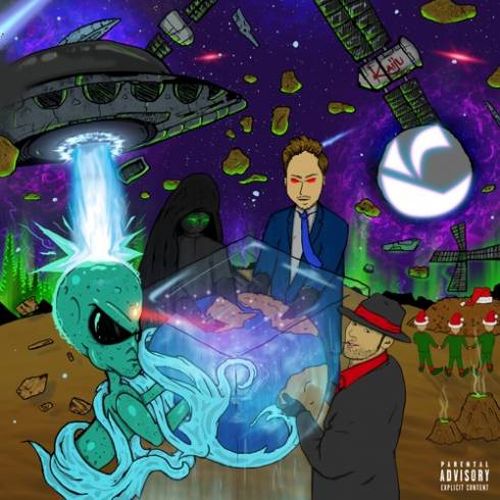 Canibus continues to polarize listeners with his latest release, “Kaiju”. I’m not even going to calculate what number album this is, as Canibus’ catalog is, quite frankly, a bloated mess. If any artist encapsulates rap as art; otherworldly talent that is wholly unique, Canibus is just that, and with any artist worth their salt, you don’t know if you’re going to get mind-blowing material or a toilet-blocking turd. It’s why he still maintains a fanbase because much like Eminem or Big Punisher, his marriage of pen-game and spit-game is elite. Some of the things he has recorded border on unbelievable. Yet, the Canibus brand remains a tainted remnant of the rap game for many fans. His debut album flopped badly but you’d think he came round to buyers’ houses and took a shit in their CD players the way some still dismiss his career as nothing but a beef with LL Cool J.

This isn’t a defense of Canibus, because he’s his own worst enemy and often indefensible. He put D12 verses on an Eminem diss which almost undone any sympathy gained from LL Cool J’s own bitch move a decade earlier. He rocked up to a rap battle and read out rhymes from a notebook. Off-record shenanigans aside, you never know if you’re going to get mastery of the English language (like on “Lyrical Law” or “Rip the Jacker”) or a musical mishap (like on “Fait Accomplait”).

“Kaiju” emerged with limited fanfare and is admittedly solid if not spectacular. The production from Body Bag Ben is more grounded than some of the loudly cinematic material Bis has used in the past. If the name seems familiar, Ben came off a collaboration with Milano Constantine a year earlier and cooks up some typically tough backdrops for Bis to rip to pieces. The odd, intergalactic artwork coupled with the first bars you hear being “the empire beneath the ice, has everything to do with your life, history is music, music is life” means this certainly isn’t your standard tough-talking emcee. The elaborate use of vivid imagery and peculiar phrases contribute to an album that threatens to explode into action but splutters too frequently to recommend it.

The DMX feature works but it’s a strong use of the word feature given it’s merely adlibs. You’ve also got an MF Doom feature as a bonus (“Chase”) – it’s unclear whether these were always going to be included but seeing as both passed away in the last 12 months it does look a bit attention-grabbing. As does the song titled “Travis Scott Concert” as Bis leans into shock-rap tactics, and considering this title could have been changed out of respect for those that perished at the fatal Travis Scott concert last year, it only makes it harder to defend Canibus in 2022.

There’s more creativity in a Canibus verse than many emcees show on a whole album, but for every impressive sequence of rhymes, there’s a clanger thrown in too. There’s so much to say about “Hydra” I don’t know where to start. He’s laughing at farts, warping into a weird English accent on the final verse, and kicks off the track by outdoing his infamous “you ain’t got the skills to eat ass like me” bar with “lay there while I fuck your face”. This sporadic switching between embarrassing and enthralling sums up Canibus and ultimately leads to too many frustrating performances.

Tracks like “Animal Husbandry” and “Curmudgeon” highlight Body Bag Ben’s production really suits Canibus. It’s the style of beat that could have made his 1998 debut LP the classic it should have been – dark enough without detracting from the extravagant rapping. Some of Canibus’ most impressive records are the lengthy displays of lyrical acrobatics. “Kaiju Karaoke” is littered with thought-provoking quotables with some rare glimpses at his flaws. “I ain’t famous enough but they still mention my name too much” and “My lyrics aren’t immediately obvious” cut through quicker than any scientific vocabulary could, and it’s something I’d like to hear more of. Another track I enjoyed is “Verzuz”, probably the highlight of the whole project, which sees Bis sharing all sorts of scenarios for match-ups in the online series except with a twist. Kool G Rap vs. Big Pun but held in a Smart car is hilarious, as is Lauryn Hill vs. Bushwick Bill. Shabazz the Disciple vs. Bad Bunny! It’s wild and obviously designed around what rhymes, but it’s enjoyable considering all that’s happening is artists being listed. Not many emcees could make that entertaining for nearly eight minutes.

The two bonus tracks are worthwhile additions: the former is the aforementioned MF Doom collaboration “Chase” which also includes Kool Keith and Justin Tyme; the latter is an excellent collaboration with Hus Kingpin that benefits from a crisp Macapella beat reminiscent of peak Havoc.

The key issue with modern Canibus is that the ratio of extravagant statements leans too far into “did he really just say that shit?” instead of “ohhhh shit, did he really just say that?”. Much like Eminem, his contemporary and enemy of yesteryear, the quality control is limited and we are left with very self-indulgent approaches to lyricism. If you’re not already a fan of Canibus, there’s not really much here to convince you why he’s still worth checking for. You’ve got moments of spectacular free-flowing rap coupled with bewildering statements that threaten to undo the good stuff. If you can take the negatives with the positives, this is certainly worth hearing at least once.