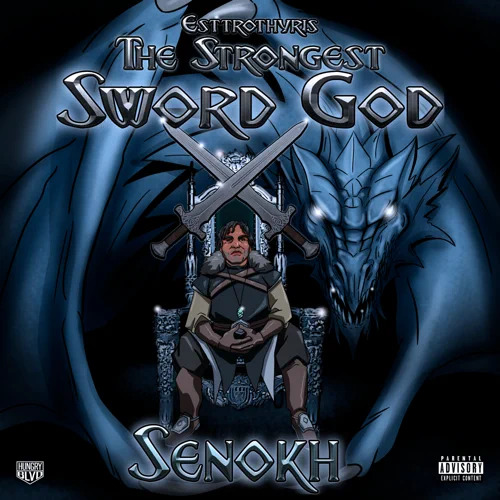 A fresh face on the Hip-Hop scene, rapper Senokh has rolled out a new EP for the enjoyment of his fans. It is rather short, even for EP length, but ideally it could be a release useful in bolstering the rapper’s audience. Unfortunately, however, the Texas MC does not do a great deal to impress or even gain notice by way of his rapping abilities or the beats they are delivered over on these four songs.

Whether it’s the opener “Prima Materia” or, well, any of the other three tracks that follow, this EP does a great deal more to highlight Senokh’s weaknesses as a rapper than it does to bring any of his potential strengths to the forefront. His rhyme schemes, for example, are rather mediocre, though that’s just the start of this record’s deficits.

For instance, it should go without saying that the choruses laid down on “Esttrothyris: The Strongest Sword God” range from extraordinarily bland to rather annoying. Perhaps the best example of this can be found in “God(S)word AKA The Dragon’s Dichotomy”. On this track, the repetitive declaration of a “hickory dickory”-based chorus framework becomes aggravating to listen to almost immediately.

The production on this EP doesn’t do it any favors either. They are often slow, though this pacing is not used particularly tastefully. On “The Perfect Paradox”, for example, a tired, snare-laced beat might just be worth napping to.

When it comes to a broad description of this project’s mood and overall layout, the phrase “laid back” might certainly come to mind and be applied to this project. Unfortunately, here it is almost always in excess. For when does a laid back song become a lazy beat, a sloppy hook and weak raps thrown together as one? The answer? About four times in a row on “Esttrothyris: The Strongest Sword God”.

Senokh’s flows are decent at times, and the beat on “Blade of Black Snow ” is interesting, to a fairly light degree. Sadly, there is little else to say in praise of this project.

Unfortunately, Senokh doesn’t seem to have put several of the necessary pieces together in terms of crafting a project like this one. This is not to put him down, but rather to encourage him to continue working on his craft and always strive for more as an artist.