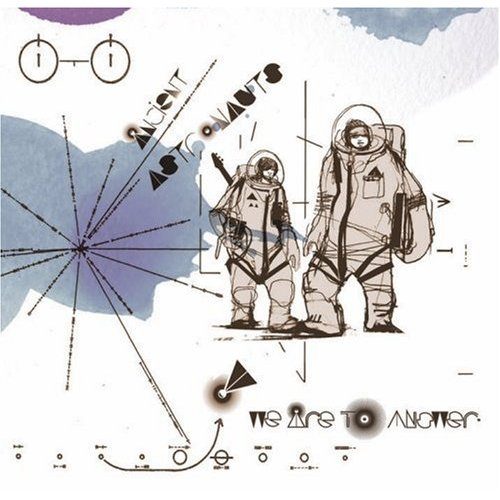 We Are to Answer

Ancient Astronauts :: We Are to Answer

Hip-Hop continues to be an international language all its own, more widely spoken and more easily interpreted than Esperanto could ever hope to be. Witness the Ancient Astronauts, fronted by the duo of Kabanjak and Dogu, claiming to be interstellar travellers who journeyed the cosmos for eons before touching down in Cologne, Germany. A far-fetched premise to be sure, but hardly mind-boggling for hip-hop heads used to eccentric concepts from the likes of Kool Keith and MF DOOM.

Now one might think it would be hard for an english speaker to understand Kabanjak and Dogu, given that these travellers no doubt absorbed the native language of the country where their ship landed. Thankfully hip-hop is the answer. From the start to the finish of “We Are to Answer,” you will not hear a word of German spoken, although the Astronauts are certainly not intending to offend their gracious hosts in Cologne. Indeed the Astronauts only want to spread their message to as many continents and shores as possible, and speaking with their beats can accomplish this feat.

The Ancient Astronauts employ a wide variety of sounds which intentionally or otherwise cause you to want to GET DOWN. The aptly named “Everybody” will send the masses flocking to the dancefloor with a beat that’s part Lumines, part retro-funk and part disco boom bap all supercolliding together sending quarks and nuons through every appendage. Not all of their tracks release such high energy though. “Crescent Moon” is a softly strummed slow song full of cymbals, hi-hats and echoing strings that’s so mellow you can literally fall into a trance listening to it. The song exudes the kind of quiet cool that can be found in Daniel Craig’s portrayal of James Bond.

This is not to say there is no spoken language to be found on “We Are to Answer” whatsoever. Guest stars play a prominent and welcome role, collaborating with these galactic voyagers to spread their message even further. “Classic” is a pleasantly surprising duet with The Pharcyde that shows even in 2009 the vocals of this legendary Cali group can “keep the crowd jumping like trampolines and pogos.” Reggae vibes also creep into the galaxy this album encompasses when Rasta Irie gives exultation to Haile Selassie I on “All of the Things You Do,” keeping his spirit in balance with his desire to rock the mic over the cool’n’deadly Astronauts beats. Even the heavily slept on Zeph & Azeem get a piece of the action on “Oblivion,” spitting some ancient history the Astronauts would be familiar with, revealing truth that has been hidden or distorted through time by mankind. “A soldier with no enemy will never know his own strength” raps Azeem, before wryly noting “I just painted armageddeon and made it sound like heaven.”

Despite the barriers of culture, language, geography and their allegedly alien nature, “We Are to Answer” feels immediately familiar and accessible to anybody who has ever spoken the language of hip-hop, but perhaps more importantly, it’s accessible to those who have NEVER understood rap music’s dialect. The vibes these galactic b-boys are on crosses over to all cultures, from the cool riddims of “Surfing Tha Silvatide” with Bajka to the crooning of Phat Old Mamas on “A Hole to Swallow Us.” Too many conceptual albums come along offering big promises only to be gassed up off the egos of their artists to Saturnic sizes that are larger than the listener can comprehend. The Ancient Astronauts on the other hand bring it down to Earth, figuratively and literally, and create music that pleasantly transcends all barriers.

Ancient Astronauts :: We Are to Answer
9Overall Score
Music10
Lyrics8.5