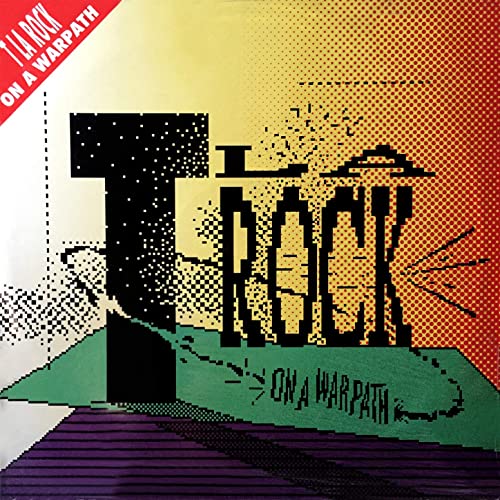 “Commentating, illustrating.” If you’re of a certain age those words immediately invoke memories of a classic rap song – T La Rock & Jazzy Jay’s single “It’s Yours,” which depending on how you choose to split hairs is or isn’t the first record on Def Jam Recordings. The technicality (for those curious) is that the single featured the famous Def Jam logo, but was so early in their history that it was actually published through Partytime Records. Shortly after Rick Rubin spearheaded the release of “It’s Yours” he joined forces with Russell Simmons to release LL Cool J’s “I Need a Beat” on their own record label, and the rest as they say is history.

Nearly five years after this landmark rap single T La Rock dropped the album “On a Warpath,” a title which belied the notion Rock was at peace with being a forgotten pioneer. Even though James Todd Smith was second out of the gate, he quickly achieved a level of fame and notoriety vastly surpassing Rock, moving from hit singles to hit albums. Marley Marl helped to get Cool J there, but so did Smith’s lyrical dexterity and GQ looks — the same visual appeal that saw him transition to television stardom in sitcoms and crime dramas. Was he jealous? It’s hard to know that for a fact, but when you’re known for breaking a mold just so others could create one of their own to fill successfully, it might make you ever-so-slightly bitter.

The problem is that Rock did very little to get away from that “one hit wonder” status by including a “It’s Yours (Remix)” on his second album. The problem is that it’s not even superior to the original. There’s nothing technically wrong with a new take that samples from Bob James’ “Nautilus,” but it doesn’t have the stripped down raw sound that made the original so invigorating. It’s not even the best usage of “Nautilus” out of literally hundreds of recorded bites of the song. In short it’s an unoriginal revisit that was entirely unnecessary, which for better or worse was how people felt about T La Rock’s rap career at this point. “On a Warpath” never even cracked the Billboard charts, which wasn’t exactly hard for a popular rapper to do by 1989.

That’s not to say T La Rock released a bad album. There’s a certain irony to tracks like “Flow with the New Style” when his style didn’t change one bit in five years. “You’re nothing but a follower, a lyric borrower/a man of yesterday, I’m a tomorrow-er.” New? Nope. There’s a charm to it though that certainly didn’t exist in the album’s heyday. While the harder raps of Chuck D, Ice Cube, Scarface, et cetera were leaving clean cut emcees like Rock in the dust, in retrospect there’s an earnest sincerity to the “New Style” of T La Rock. He may not have evolved along with his contemporaries, but that makes the old school call and response of interludes like “On Tour” more fun as a result. It evokes an era of rap records that isn’t being made today. Rock was Jurassic 5 before they even existed.

There are some songs however that just don’t work no matter how hard T La Rock tries. “Keep That Groove” was clearly meant for the dance floor, but doesn’t generate enough of one to get people on it. It’s not even a groove at all — it’s just a bunch of samples strung together to an uptempo beat as Rock tries and fails to deliver interesting words to go with it. The same can be said of his attempt at house music on “Housin with the T’s” except there’s LESS of a groove and a faster flow overall. Rock is at his best when he’s not chasing the trends of 1989 and just spitting his basic braggadocious raps on tracks like “I’m Gettin Mine.” While “Theme From S.W.A.T.” by Rhythm Heritage is another oft-sampled track, it suits Rock much more than James.

“Can’t see I’m the best? You must need glasses/I’m movin fast as a Cheetah, others slow as molasses.” Rock’s raps weren’t the cutting edge then or now, but his pleasing tone and superbly clear delivery aged well, which is also a credit to whoever mixed and mastered the music. It takes the otherwise dated drum samples of a song like “T-n-Off” and gives them perfect edge for equally dated references: “I’m like Sonny Chiba, a real street fighter!”

“On a Warpath” will never go down as an all-time classic rap album. There are too many misfires among its 14 tracks to make it a transcendent release. For what it’s worth though the fact T La Rock had fallen behind the times five years after creating such an innovative rap sound does work in his favor here. When he attempts to be trendy he sounds corny, but when he sticks to what brought him to the dance, it sounds charming regardless of how out of step he may have been with his contemporaries. I don’t think this is an essential record but as Todd in the Shadows might say, I do believe he deserved better than being known for just one song.