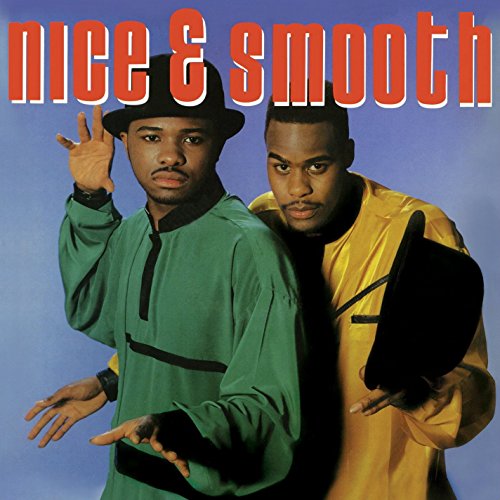 Accidentally or purposefully the Wikipedia entry for Nice & Smooth is misleading. There’s a chance it will be revised by the time you read this review, but as of right now it implies that Nice & Smooth’s independent single “Dope on a Rope” led to their guest appearance on Big Daddy Kane’s “Pimpin’ Ain’t Easy” and subsequently launched their rap careers. Even a cursory glance at the facts shows this is not the chronological order that the events occurred in. They’re right about that first single, but the self-titled “Nice & Smooth” was released on May 16, 1989 and supported by two singles — “Early to Rise” and “Funky for You.” Kane’s “It’s a Big Daddy Thing” didn’t come out until September 19th of that same year and “Pimpin’ Ain’t Easy” was never released as a single.

The most generous interpretation of this confusion would be that Greg Nice and Smooth B recorded their guest verses for Kane at the same time they were working on their own album, and “Nice & Smooth” just happened by chance to come out first. I’d counter that the more likely scenario is that Nice & Smooth were rising rap stars in NYC, Kane saw the breakout success of “Funky for You,” and invited them to appear himself or through mutual friends. There are many MANY things King Asiatic Nobody’s Equal should be credited for, but launching the careers of Nice & Smooth isn’t one. They got their on their own two feet and even survived when the label they signed with (Sleeping Bag Records) imploded.

There is one coincidence between the two that is unavoidable and has to be addressed though — they both sampled “All Night Long” by the Mary Jane Girls for a song. The way they loop it is almost entirely the same — Kane on “Smooth Operator” and the Bronx emcees on “More and More Hits.” Now I’m not casting aspersions since it has been featured in over 100 songs, but if you bought both albums in the same year you’d certainly notice. I did and I knew absolutely nothing about sampling at the time, and there certainly wasn’t a database of samples you could look up online in 1989, but I figured it out pretty quickly anyway.

It also didn’t escape my notice that “Early to Rise” sampled from the Fat Albert Theme, and how could it since I grew up watching that cartoon? None of these things were a bother to me. In fact even though I was pretty adamantly pro-rap and anti-R&B at the age, I actually thought the singing Nice & Smooth did on “More and More Hits.” It even leveled the playing field a bit between the two. On most songs Greg Nice is the charismatic hype and Smooth B is the laid back voice of eloquence, but when they were both crooning it seemed totally natural. It should have been a single too but the same thing can be said for the majority of “Nice & Smooth.”

“My long rhymes span infinite miles/cause I’m building, a new rap level/through bass and treble I will abolish the devil.” On “No Delayin'” Smooth B is showing off the sophistication of his thought process and rhyme flow, while Greg Nice vows they’ve “got more songs than a record store” in his highly imitable fashion, seemingly shouting his bars one after another into the mic. Lines like “I’m a trooper and you’re troopette/I’m Mr. Smurf and you’re Smurfette” should be cringe (if for no other reason than that he said “Mr. Smurf” instead of “Papa Smurf”) but work just on the strength of Nice’s charisma. You can also notice a sample of Bob James’ “Nautilus” on the track if you’re paying attention — it’s brief but you’ll immediately get “Daytona 500” vibes from it.

Every song on the album is like this — familiar samples, Smooth B being an absolute God on the mic, and Greg Nice being the lyrical yin to his yang. Barry White and Lyn Collins form the basis for their ode to “Gold,” and even their deejay Teddy Ted gets a few memorable bars on the track. You may not know the name of King Floyd’s “Groove Me,” but I bet if I said “aww sookie sookie now” you’d know where “Perfect Harmony” got its funk from. “Hit Me” gets its own from Funk, Inc.’s “Kool Is Back.” In a way the self-titled debut of “Nice & Smooth” is as much a testament to the golden era of sampling as it is to the group itself. Before every loop got litigated and every performer got paid, record crates were a treasure trove of old breaks you could make into fly new rap tunes.

God damn, even ESG’s famous “UFO” sounds (a familiar bass and screech that has informed more rap hits than I can possibly name, although if you know “Fuck Compton” you’ll never ever forget it) makes its way into “Dope Not Hype.” What more can I say at this point? Let me sum it up like this — rap music has had some all time great lyrical duos. You’ve got Run and D.M.C., Erick Sermon and Parrish Smith, Chuck D and Flavor Flav, and you have to add Greg Nice and Smooth B to that list. Their chemistry together was so good that it’s a damn shame they were only together for three albums. If you don’t own “Nice & Smooth” go and get it right now.