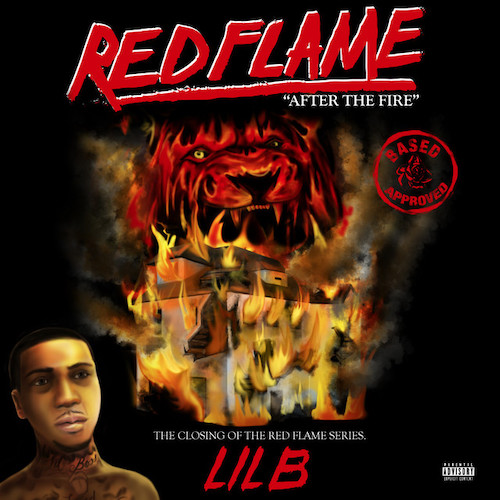 Red Flame After the Fire

Lil B :: Red Flame After the Fire

I needed some time off from Brandon McCartney after my last Lil B review. Even though I have very positive views about B’s self-made independent career and constant hustle, I had very negative views about how little of his work ethic showed up in his music. I felt that some space away from B would give me more time to appreciate what he had to offer on an album.

“The Anger Is Done” accurately states how I feel listening to “Red Fire After the Flame.” I’m no longer mad at Lil B for cranking out yet another half-assed mixtape full of low effort beats and rhymes. I still take exception to the fact he thinks that albums over three hours long are a good idea though. I can’t sit through three hours of Raw on Monday nights. I usually get through an hour at the most and then think “I’ll just watch the highlights on YouTube later.” Now a Lil B album is (usually) more entertaining than that, but I’m still left thinking we need a “selected moments” version because his releases are bloated. I also can’t shake the feeling that he records the songs sequentially in marathon studio sessions, and by the time you reach the end he’s gotten as tired of doing it as you have of listening to it. When every track is named “Freestyle” you know that he’s running out of gas.

“I shake my booty like Dwayne Wayne/people thought I was the coochie mane/I’ma kill a nigga like Gucci Mane.” There’s no doubt he was freestyling at this point in the session, because if he was writing these lyrics down he would have looked at them and thought better of it. It may be that he thought AutoTune would make the whole thing better or at least funnier but the entire “Lift My Arm Based Freestyle” is obnoxious. The shame of it is that there’s a good instrumental underneath it with some nice thump but the modulated off-key warbling completely destroys it. It makes me wish for a magic eraser to wipe the vocals away so I could just hear the beat.

If you stick to the first half of “Red Fire After the Flame” though there’s some tremendous moments. “New Balance” has a thoughtful B talking about poverty and black-on-black crime, and if you read between the lines he seems to imply capitalism is the new slavery. It’s not a “rap” per se. It’s more like B speaking extemporaneously, trying to make sense of the world over the pianos and drums, but it’s cool. On “Wrong or Right” he bemoans the mistakes he made in his youth, such as robbing and stealing from his own family just to make a little money, and his genuine remorse for those misdeeds shines through over the slow tempo of the instrumental. The song is padded out at the end to an unnecessary degree, but that’s true of Lil B albums in general, so it’s to be expected.

It’s hard to justify the extremes of a Lil B album at times. When he says “The difference between you and me is I don’t give a fuck” on “Under Koncrete” he’s speaking the truth. He’s a tremendous talent who has built up such an impressive machine with his brand and image that the machine keeps rolling even when he doesn’t give two shits. In the abstract you can argue that Lil B creates albums that are “yin and yang,” opposite forces that balance each other harmoniously. The problem is that when you try to take that abstract idea and make it concrete (pun intended) you’re suggesting that half of the time you smell roses and half of the time you smell sewer gas. Yeah that’s “balanced” in a sense but why would you want to do it?

There’s more to like on “Red Fire After the Flame” than I’ve heard from B in a while. “Play on the Street” is an almost perfect track. It proves the Based God can do Kanye better than Ye at this point in their careers. “Sometimes I Rhyme Slow” is a nod to Nice & Smooth without sampling it or remaking it and I respect the hell out of that. There are even some nice moments in the “freestyle” half of the album. The “Texas Madena Based Freestyle” is another case of B not really “rapping” at all, but the instrumental and his seemingly drunken or stoned rambling still fascinate me. “Long live our fallen soldiers/but never fallen, actually they fly high in grace.” You just listen to B say whatever is on his mind and sometimes he stumbles over a profound thought even though he claims to not give a fuck.

The best way to appreciate this release is the best way to appreciate most of Lil B’s catalogue — break a piece off the whole, find the parts that are good, and discard the ones you didn’t care for. It would show more appreciation for his audience if B was himself more selective, but he forces that burden upon the listeners and leaves you to separate the wheat from the chaff. At least with “Red Fire After the Flame” I can say the effort was worth it, so as the old saying goes on social media, #TYBG.