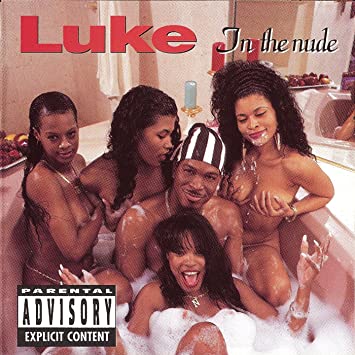 It’s my humble opinion that people don’t give Luther Campbell enough credit. I already know what the counter arguments will be — he wasn’t the first Miami bass artist (nor the best), he wasn’t the first dirty talking rapper (nor the best), and he wasn’t the first person to release a record that got “Banned in the U.S.A.” What’s undeniable though is that he took a legal fight over 2 Live Crew’s parody of Roy Orbison’s “Pretty Woman” all the way to the Supreme Court and WON. In the process he established a precedent for all artists to have parody protected as free speech, even if that parody was for commercial or profit generating purposes. This and the constant battles 2 Live Crew fought over censorship made them unlikely heroes for the First Amendment, but as the old saying goes, not all heroes wear capes.

“In the Nude” was a historically important album for Campbell for several reasons. It was the first of his albums to be released independently after he and Atlantic Records severed their distribution deal, it was his third straight Top 20 solo album on the Billboard R&B/Hip-Hop charts, and the single “Cowards in Compton” was his most direct rebuttal to the disses of Snoop Dogg and Dr. Dre yet. While Campbell has always been more of a hype man and larger than life personality than emcee, he didn’t need to carry the weight on this response track — he let JT Money & Clayvoisie do the talking for him. The best Luther Campbell songs tend to work out this way, such as the surprising “Bad Land Boogie” featuring Home Team. If it sounds to you like Grand Puba suddenly jumped on Pete Rock’s “The Creator” then you had the exact same feeling as me hearing his team flip the same sample.

As fun as these and other songs on Luke’s third album are, the presentation is incredibly bloated at nearly 77 minutes long. There are a lot of unnecessary skits like “Pimple On My Dick,” “Stop Looking at My Dick” and “Wear a Rubber” that are completely unnecessary to listen to then or now. Campbell’s lack of rapping ability is also completely exposed by four minute plus songs like “Take It Off,” where he’s doing a call and response like a live deejay, so he has to have a whole group of people in the studio to shout “show them titties, show them ti-tayyyys” back at him. In fact let’s call it exactly what it is — a song that was only meant to be performed by 2 Live Crew at a live concert. There’s no reason to listen to it this way.

Unfortunately this is only part of the problem for Uncle Luke. I’m not sure who green lit “Tell Me What You Know” other than his own ego, but on an already overly long album it’s six minutes of Luke talking shit about people he doesn’t like. I get airing your grievances on a record, but since he’s not rapping while doing so, it’s really not entertaining other than the beat. On top of that his homophobic remarks about Spike Lee really didn’t age well, nor did his joke about blowing up the World Trade Center. Yeah there’s no way he could have predicted 9/11 would happen, but OUCH just the same.

On top of that the fact the album includes songs with titles like “Head, Head and More Head Pt. II” and “Menage a Trois Pt. II” implies that Mr. Campbell was running out of ideas. The strength of 2 Live Crew was that he never had to rely on just himself with the rest of the group able to carry the load lyrically, but not only did Luther Campbell not know when to say no to his own impulses, he didn’t know when to let an old idea stay retired and move on. To his credit though that single-minded relentless obsession with his favorite topic(s) kept him a cultural icon well past the 1980’s and 90’s, even if it often resulted in banal songs not worth revisiting. Some of these songs aren’t even “songs” at all — just a collection of samples strung over beats.

I started out by telling you Luther Campbell deserves more credit than he gets and I’ll stick to my guns on that. He’s a rap pioneer, he’s a free speech advocate, and in a genre where we’ve lost far too many of the people who made history he’s now the wise “Uncle Luke” everyone can seek out for advice. I’m a fan and admirer of his for all of these reasons, but “In the Nude” is not essential for your catalogue by 2 Live Crew or by Luke as a soloist standards. It exists, and I don’t hate it, but I really don’t need it.