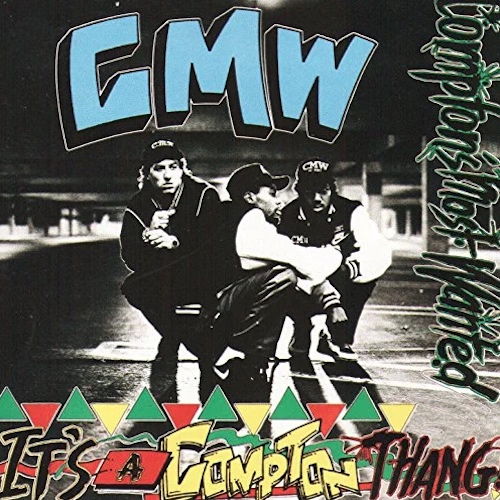 It's a Compton Thang

Perception changes over time. That may seem like a self-evident statement but it’s pertinent to reviewing “It’s a Compton Thang.” Back when the single “This Is Compton” ^1 dropped in 1989, the perception of Compton’s Most Wanted was that they were trying to rip off the infamy of Compton thanks to the success of N.W.A and their “Straight Outta Compton” single/album. That tracks just looking at their name and their single’s name right? Compton’s Most Wanted releases a single called “This Is Compton.” Of course they’re biters. They saw what N.W.A was doing and they wanted a piece of it too.

With over 30 years since the release of “It’s a Compton Thang” we can look at CMW’s debut with different eyes. The timing might seem sus at first given “Straight Outta Compton” dropped in ’88 and CMW’s album released in 1990. (Or if you prefer — the single came out in ’88 and “This Is Compton” came out in ’89.) It feels like N.W.A did it first and CMW did it second. Open and shut case? Not quite. With the benefit of hindsight we know that MC Eiht and Tha Chill were already recording demos of their own before N.W.A blew up and that both were friends with MC Ren. The success of N.W.A didn’t cause them to copy their friends, it inspired them to give up their street hustles and go even harder to get a record deal. Given they’re all from the same city there’s an unavoidable crossover. Dr. Dre and DJ Yella both got their start in World Class Wreckin’ Cru, and Alonzo Williams was the first man to release a professionally recorded CMW song.

I can’t see CMW as biters or copycats when every rapper from Compton was chasing the dream at the same time. It just so happened N.W.A was the first to put Compton on the map for the masses, so from that point on anybody who had never heard of Compton looked at the next group from there as “the new N.W.A clone.” If you evaluate Compton’s Most Wanted on their own merits it’s quickly apparent they are not clones. Neither Eiht nor Chill sound like anybody in N.W.A and songs like “I’m Wit Dat” emphasize their goal to be “funky” gangsters. A strong Isaac Hayes sample certainly helps.

The song that cemented CMW as their own group with their own vibe for me was “One Time Gaffled Em Up.” It’s a song about riding around trying to chill and enjoy the city life, only to be consistently hassled by the cops and accused of being drug dealers. “By the way MC Eiht where’s the dope you tossed?/Me sell dope, officer I’m a rap singer.” It sounds like the kind of track that would be full of anger, but the Fred Wesley and the J.B.’s sample keeps the entire vibe super chill (no pun intended). This is a perfect song for slow riding with the top down.

For better or worse it also illustrated one of the things that would continue to haunt Compton’s Most Wanted — MC Eiht was the most recognizable member with the most distinctive voice. He was the clear star from day one. The analogy that readily comes to mind is KRS-One and Boogie Down Productions. You can say you’re a group as much as you like, but when the general public only identifies one member as the frontman, what do the rest have to offer? You have to give it up to DJ Slip and The Unknown DJ for their excellent production, and Mike T does his thing on the turntables, but Tha Chill was absent from some of the recording sessions (ironically due to being gaffled by the pigs) which only made Eiht’s star shine even brighter. The song where they come closest to a 50/50 split is “Late Night Hype.”

This once again illustrated the difference between N.W.A and CMW. While both groups come from the same place, have the same mutual friends, and no doubt smoked and freestyled together, N.W.A consistently sounds pissed af while Eiht and Chill are super mellow. They draw you into their Compton narrative without yelling at bitches and screaming “Fuck Tha Police.” Even when they’re hitting back at their critics on a song like “Duck Sick” (flip the first letter of each word to get the point) it still has a super laid back groove.

Even though I’ve devoted a substantial part of this review to telling you the perception of “It’s a Compton Thang” back in 1990, I should close by saying how little I cared about said perception. Having been exposed to their music through programs like Yo! MTV Raps and magazines like The Source, I was interested in CMW regardless of who said they were just trying to jump on the Compton bandwagon. That’s not to say there aren’t plenty of whack-ass groups and solo acts from the era who were, and some who very blatantly copied the N.W.A style and sound, but Compton’s Most Wanted is absolutely doing their own “thang” here and it’s beautiful to listen to.