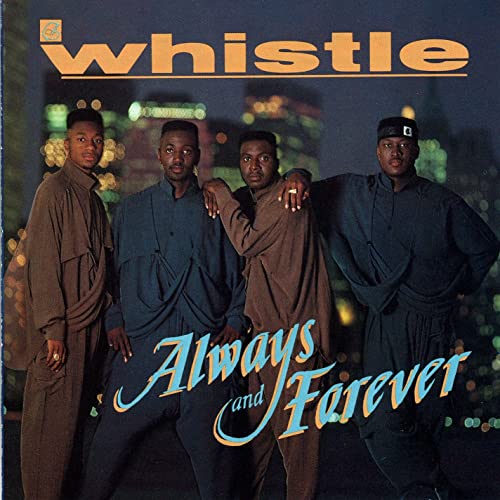 Holy shit is this ever some cornball R&B crap.

I was under the impression that “Always and Forever” was an album from Whistle, the same guys who brought us the novelty rap hit “(Nothing Serious) Just Buggin'” a/k/a “We’re Only Buggin'” back in 1986. Surely this corn syrup R&B can’t be from the same guys as that seminal rap hit.

Well it is and it isn’t. According to Wikipedia (and rely on them as an authoritative resource at your own peril), Kool Doobie left the group to go solo, at which point they brought in new members named Kraze and Terk. When Doobie left the rapping seems to have left with him, because the group immediately did a pivot toward R&B, with their biggest hit of that phase being the title track of “Always and Forever.” It’s a cover of a Hathaway song, but it’s so sappy I’m not sure I’d even appreciate the original, and quite frankly it only goes downhill from there.

For me the only positive of over-emotive songs like “Right Next to Me” is that they make me yearn for Boyz II Men, which they somehow sound like a low rent ripoff of, even though “Cooleyhighharmony” came out a year later. That’s some kind of special talent. It’s like Rigby complaining about everyone treating Don like the older brother when it’s the other way around (sorry, Regular Show reference). On the plus side this album was produced by the late great Kangol Kid from UTFO, so it’s got an undeniably smooth sound even if it’s so sweet that it gives me a toothache.

“Body Reader” might be the only chance Whistle’s album has at any attitude, but if you’re listening to the LP sequentially it feels like too little, too late. Let’s be honest that a whole album full of “Just Buggin'” would have fallen flat in 1990 let alone in retrospect, but this wasn’t the way to go either. Whistle would not be the first or the last rap act to abandon rapping and go R&B, but for my money the sappy sentiments of songs like “Do You Care?” make it one of the least pleasant transitions I can think of.

I’m sure someone out there is nostalgic for the quiet storm, soft spoken, heart on their sleeves R&B of Whistle or their “Always and Forever” album. I’m not that guy. There are plenty of R&B artists that I enjoy, including some controversial ones like Robert Kelly (just goes to show that the crooners can be a menace to society too), but for me Whistle is just cookie cutter rhythm and blues that was mass produced for public consumption. Even mass produced cookies have flavor though. Chips Ahoy are just fine if you need a snack and don’t expect chocolate chip perfection. This isn’t even Chips Ahoy — this is the dollar store knockoff.