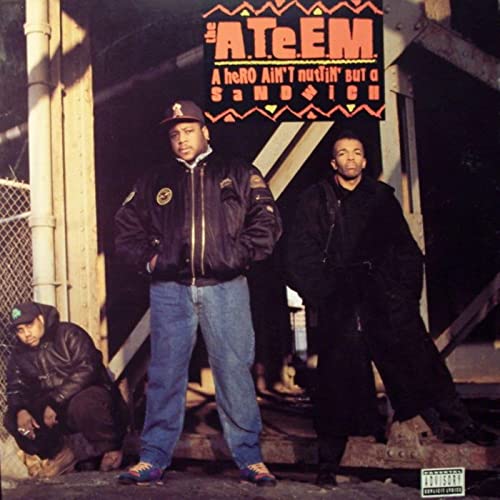 A Hero Ain't Nuttin' But a Sandwich

“In 1972, a crack commando unit was sent to prison by a military court for a crime they didn’t commit. These men promptly escaped from a maximum security stockade to the Los Angeles underground. Today, still wanted by the government, they survive as soldiers of fortune. If you have a problem, if no one else can help, and if you can find them, maybe you can hire… the A-Team.”

This is not that A-Team. This is The A.T.E.E.M., a group consisting of Rob Swinga, F.M. and Hot Dog. (Seriously? Hot Dog was the best nom de plume you could come up with?) If some of these names sound familiar you’re probably a fan of Chubb Rock, because various A.T.E.E.M. members made cameos on his albums as guest stars or on posse tracks. The friendship extended in the other direction as well, as The A.T.E.E.M. were signed to the same label (Select Records), he executive produced them, and he appears on the opening and titular track from their debut (and only) album “A Hero Ain’t Nuttin’ But a Sandwich.”

With those kind of credentials and production from The Trackmasters, there was no doubt The A.T.E.E.M. would blow up in 1992 — only they didn’t. They did release a single and a music video called “Yeah.” There’s nothing remarkably positive or negative to say about it. It sounds exactly like the kind of song you would have heard on a NYC mixtape from the era. It feels like a mixture of Naughty By Nature, Onyx, and Black Sheep — only none of the crew have the charisma of Treach, Sticky Fingaz or Dres. It’s not that they phone in their performances, but Rob Swinga bars like “Well I can kick a verse high, I can kick it low/And I’m not Wonderbread but I got dough” just barely elicit a smile. It’s not that he isn’t trying, but it’s also not the kind of line that you’re going to remember even if you hear it more than once.

And when they weren’t exhorting people to throw their hands in the air and say oh yeah, they tried to make serious message tracks like “Sister Morphine.” Thanks to another guest appearance by Chubb Rock this one rises above the threshold of the album to become something interesting — but that’s exactly the problem innit? If you have to rely on your executive producer to provide enough star power to make a song on your album stand out, then you aren’t showing enough personality to be stars yourself.

This A.T.E.E.M. feels like they needed The A-Team to solve their problems. At some point everything feels formulaic. If you guessed that “One Two, U Don’t Stop” would feature a Slick Rick sample, you guessed correctly. What would sound slinky and kinky enough for a song called “Pass the Pussy” then? You got it — The Honey Drippers, Syl Johnson and Funkadelic. Honestly it’s a fail though because Kool G. Rap’s “Talk Like Sex” was a WAY better usage of “Different Strokes.” And guess what? The only “Hannibal” this crew has is Chubb Rock, and he practically owns the song “Come.” It might as well be a cut from one of his albums instead of A.T.E.E.M.’s.

Look, “A Hero Ain’t Nuttin’ But a Sandwich” is far from a bad album. In fact if you’re a Chubb Rock fan it’s probably worth owning just for the amount of times he appears on it. Were it nor for the fact I took the time to look back on it and go over it with a fine toothed comb though, there’d be nothing whatsoever to discuss about this group. They came (no pun intended) and they went in a heartbeat. They might blame their record label or their production, but neither one were incompetent in any way. The rap market was already well saturated in 1992, and even if you squeezed that sponge as hard as you could, The A.T.E.E.M. was not going to drip out.