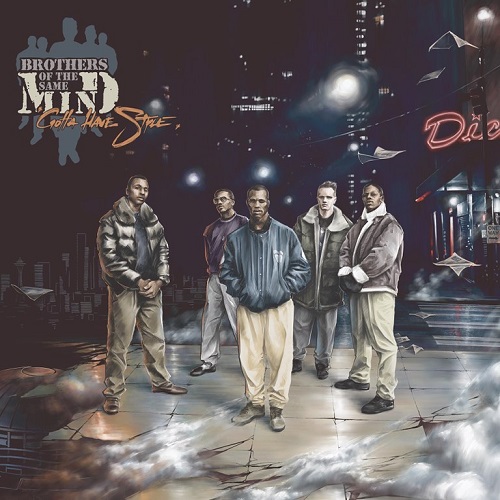 Brothers of the Same Mind :: Gotta Have Style

Just like there’s more to Sir Mix-A-Lot than “Baby Got Back”, there’s more to Seattle than Sir Mix-A-Lot. If this introduction sounds like the year is 1992, it’s because Brothers of the Same Mind’s “Gotta Have Style” takes us back to the years just before the Seattle rap scene blundered into international TV rotation with that darn song (that overshadows the frankly brilliant album it came with).

Brothers of the Same Mind presented themselves as a trio in The Source magazine’s ‘Unsigned Hype’ column in October 1990 – M.C. Class, DJ Swift and Nerdy B. Originally intended for the production team of DJ’s Nerdy B and Swift, the dead-on Public Enemy reference replaced the pre-hip-hop-generational The Last Poe’-tz as the group’s name and eventually Brothers of the Same Mind comprised five members hailing from Seattle, New York, San Francisco and Detroit.

Brothers of the Same Mind may have named themselves after a Chuck D phrasing and their prospective album after a KRS-One imperative, but they had their own agenda, so you won’t find some of the time’s typical talking points on “Gotta Have Style”. They complied with their record company’s demand for a radio single, though, which explains “Cool Drink (In the Springtime)”, which is not representative for the rest of their material.

“Gotta Have Style” is not a reissue but a hypothetical album manufactured in 2021 with songs recorded over 30 years ago. The group did release a seven-track debut in 1991, but with the addition of songs that would have made the planned full-length as well as some prior and later recordings, the collection at hand sounds like a real LP fully preserved in a time capsule. This is dedicated, opinionated rap music intent to bring the noise on all fronts. M.C. Class and Sin-Q (AKA Sinister Minister) take the lead vocally, but on some tracks it sounds like everybody (possibly save for Nerdy B AKA B-Max) takes their turn behind the microphone. In best sampling era tradition, the titular track uses well-known rap vocals as slogans to drive the song ahead. It’s a common historic format, but can still be an intriguing experience to hear familiar (sampled) voices next to unknown ones. So how do these unknowns fare?

Sin-Q is an authorative MC, leaning into both the abtract poetics and straightforward rhetoric of the golden era. On some tracks, he sounds like Ice-T at his most serious. His solo tracks include “Sinister’s Realm”, where he weaves episodic impressions (over a loop probably first heard on Lord Finesse & DJ Mike Smooth’s “Here I Come”) to paint a world of chaos in which he tries to stay on top of things: “Keepin’ a grip on my mental health / cause in my realm, if you don’t, you go loony”. None other than eccentric televangelist Tammy Faye Bakker serves him as a metaphor for how mad the world is going on the solo cut “Tammy Faye’s on Soul Train”.

He’s also inclined to lose his cool, notably over bandwaggoners of consciousness, particularly those in the rap industry. Not as straightforward as King Sun’s “Be Black”, “Suspect” still finds frank words, cutting an opportunistic “As-salam alaikum” short with “Stop fakin’!” Like a number of his contemporaries, he also comes to the maligned MC Hammer’s defense as Big Daddy Kane’s “‘stead of talkin’ all that bull” echoes across the track. Sin-Q had things on his mind, see also (quoting Kane again) “I Do Damage”, where he’s not content with the direction rap is taking, seeing it as “used and abused by the new school”. More than the others, he brings a West Coast flair to Brothers of the Same Mind, and that includes a certain gift of gab such as when he rhymes, “I’m steppin’ to a different drummer’s beat / Feet so calloused, they smooth the concrete”…

What makes these older recordings worth digging up are for instance interesting details that can result from the level of reflection in the lyrics. Such as Sin’s considerations on encounters with the law:

“Authority, how do you maintain the law?
I’m on the curb, my tail light has a flaw
Now I’m trippin’, so I run off at the mouth
Now I’m sportin’ a orange suit in the house
Even though I’m clean I’m treated like a thug
Visited by my boys out sellin’ drugs
It’s quite ironic…”

The underlying menace in Sinister’s voice is contrasted by Class who’s distinctly on the positive tip. Just the same, he delivers his message with a strong conviction. Check “Soul 2 the Rhythm”:

“God put us on this planet
Not to fuss or fight, to get our souls and minds right
I reach to teach through music
Those who choose to succeed will take my lesson and use it
[…]
I won’t stop, this is real hip-hop
I’m not concerned with dollars thrown at bubblegum rap
True hip-hop, it comes from the gut, to wake people up”

But let’s not lose sight of the common cause under which this group came together. They even recorded a theme, the eponymous “Brothers of the Same Mind”. “I was a rapper with every reason to care”, recalls Class, to add, “but bein’ all alone I was mentally nowhere”. And so to reach a higher level of consciousness he went to seek kindred spirits: “I need to find a crew, a group of my kind / where we all think as one as brothers of the same mind”. Even as a number of rap acts from that era such as N.W.A, Brand Nubian or Jungle Brothers formed under a specific banner, few songs exist with such an explicit mission statement.

But don’t mistake Brothers of the Same Mind for an outfit that is hell-bent on speaking with one voice. Like in the aforementioned groups, each member speaks his own mind. In fact, “Step to the Mic” is the archetype of the rap roundtable, six MC’s saying what’s currently on their mind, at the invitation of Class: “I suggest you voice your thoughts and step up to the mic”. Slight adjustments to the backing track for each verse reinforce the impression of a panel (topics including Operation Desert Storm).

So what we have here is an interesting little record that would have fit nicely between under-the-radar albums by acts such as Insane Poetry, CPO, Yomo & Maulkie or Low Profile. B-Max and DJ Swift put together potent tracks that pack plenty of punch (and quotes), even though the sample selection could have been more original (they even draw on the acoustic loop from Edie Brickell & New Bohemian’s “What I Am” that Brand Nubian had already wound up rapping on).

Both lead rappers, stylistically free-flowing but serious in tone, put a considerable amount of thought into their role. Like their contemporaries, they are rap theorists. On the artform that enabled them to form and voice an opinion. Did you know that “with hip-hop, you gotta have soul to the rhythm”? Brothers of the Same Mind wanted to let the world know, even if in the end only few heard their words. Class and Sin also explicitly reject negativity and ignorance. If Chuck D said in “Don’t Believe the Hype”, “We’re brothers of the same mind, unblind” – the last word can evidently be substituted with ‘conscious’ or ‘woke’, and Brothers of the Same Mind would have no problem explaining to you what these words mean from a black perspective.

To come back to Mix-A-Lot’s underrated “Mack Daddy” LP, Brothers of the Same Mind actually got a shout-out on “Seattle Ain’t Bullshittin'”. Without their album materializing, however, the Brothers eventually disbanded, some of them remaining active on the scene (Class featured Sin on “Brother From the Projects” in ’93, included here). In today’s rush to release old hip-hop recordings in various formats, “Gotta Have Style” comes out near the top.