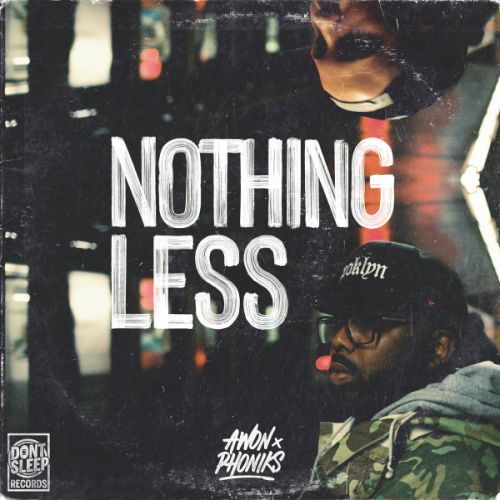 Awon and Phoniks :: Nothing Less

Awon and Phoniks are a duo from Virginia with a style of jazzy sample-based hip hop that embodies workmanlike beats and rhymes that are often reliable rather than spectacular. After the success of 2017’s “Sleep is the Cousin of Death” (and the song “Street Jazz”), 2018’s “The Actual Proof” felt like a duo realizing their vision. Laidback Sunday afternoon vibes that you can nod your head to. “Nothing Less” is pretty much that, but it doesn’t ever show signs of leaving a mark of its own.

Gang Starr are clearly an influence, from the chops, scratches, and monotone style of rapping, through to the old adage of representing real hip-hop. Of course, Phoniks is no DJ Premier but then nobody is on that level. More importantly, Awon is far from a Guru. There’s a distinct lack of charisma and personality on many tracks, which is partly addressed by seven of the ten songs having a guest feature. Without throwing too much shade at Awon, Phoniks’ beats are the highlight of their collaborations and he comes through with 33 minutes of high-quality material. Previous Awon & Phoniks records could easily be dismissed as generic pandering to a nostalgic fanbase but “Nothing Less” at least feels like a step up musically.

Masta Ace has made a steady income from lending his vocals to underground projects over the last decade or so; whether it be veterans like Beneficence or RA the Rugged Man or European artists like Professor P & DJ Akilles and TrueMendous, you know he’ll deliver the goods and inevitably steal the show. “Everlasting Game” sees him assist Awon & Phoniks although his verse sounds oddly mixed, something other tracks contain too. The Blu verse on “Sunshine” stands out and demonstrates why he’s one of the best emcees of his generation. It’s not even a great verse, but his presence, flow, and content simply stick to the beat more than Awon (although I did appreciate his jab at coke rap).

Best of all though is Phoniks channeling classic Exile – this shit slaps harder than Will Smith over Apollo Brown. “Can’t Fool Me” is LOVELY. The title track possesses a brliliant horn melody and “Cool Out” has an upbeat feel that’s hard not to smile to. “Nothing Less” is certainly not without merit when it comes to beats.

Most of Awon’s rhymes are throwaway and interchangeable, blending boasts with pandering claims to represent real hip-hop. There is a hefty helping of irony when artists’ identities rely on “boom-bap” or “90s New York”, when that period is remembered for all the unique characters and lyricists it provided us. This effectively creates a glass ceiling for emcees when you’ve got Big L and Inspectah Deck scratched into your hook – it’s one thing disguising forgettable rhymes with memorable ones, but another to make the best part of the track a reminder of a superior artist.

That said, Awon & Phoniks have proven they can create satisfying hip-hop that threatens to be memorable but is limited by its backward-looking vision. I think I prefer Awon & Phoniks’ previous album “The Actual Proof” as the more consistent project. Phoniks is flirting with greatness at certain points, but this 2021 album is largely more of the same from the duo, nothing more, “Nothing Less”.