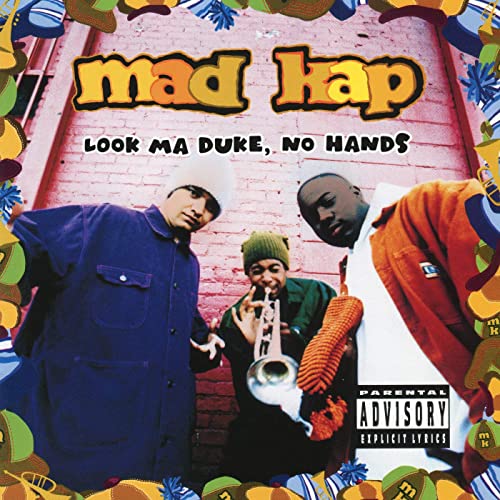 I just barely remember “Look Ma Duke, No Hands” by Mad Kap. After seeing their album on a list and confirming it was not by the similarly named Madd Kapp, I scratched my head for a while trying to figure out what I knew them for. Was one of their songs on a mixtape I traded somebody for? Did I spin their single on a radio show? Did I read a review of them in The Source? It could have been any of those things but the most likely explanation would be that I saw the video for “Da Whole Kit & Kaboodle” on Yo! MTV Raps.

“There’s a clown at the jam that you don’t like/And he starts kicking up dust on your new Nikes/Put it in your past, clear it out your mind/Start kicking it to a girl if you think that she got the time.” The group’s members are Coke, Motif and Dr. Soose, but I’m unclear who the quoted bars are from because the prior (and whiter) rapper says “Let me take a break and let Joe rip the tape.” JOE? Okay as if this group wasn’t already obscure enough, let’s use real name instead of their rap nom de plumes to make it harder. Eventually thanks to “Thoughts On the Indoe From Joe” I realized that he’s the aforementioned Dr. Soose, a rapper who also plays the trumpet in several of the album’s other interludes. The other song by Mad Kap you may know from MTV is “Proof Is in the Puddin’.”

The song immediately gave me flashbacks, but not to the group nor to MTV. It’s all thanks to a sample of Gene Harris’ track “Feeling You, Feeling Me Too” that I immediately remembered a Large Professor posse song that looped it better called “Mack Don Illz” featuring Grand Daddy I.U. and Mic Geronimo. Okay it’s not a surprise that Extra P did a better job looping something than a barely remembered rap trio from California, but it was the fact P had two (at the time) big NY rap names on his version that really made the difference and tip the scales toward the Mad Scientist.

It’s not as though “Look Ma Duke, No Hands” didn’t rally the troops for their own posse tracks though. Thanks to being Cali natives and signed to Loud Records, the group was able to pull in Tha Alkaholiks to join them on “Beddie-Bye,” which itself has no shortage of recognizable rap samples — so many I’m not even going to list them all. I’ll go ahead and make the bold statement though that if you listened to one song on this album beyond the singles this would probably be it, just to hear Tha Liks do their mic tricks.

There’s a longer and much more irrelevant posse track named “Dopest Verse” that has no bars from anybody you’ve heard of. From my vantage point it was simply an excuse for their producer Broadway to step out from behind the boards and drop a few bars, using the massive lineup of rappers to disguise his flows if he turned out to not be very good at spitting. It turns out he’s just fine on the mic, but in a way that’s exactly the problem with “Dopest Verse.” It’s a song with a misleading title because NOBODY has earned that title on this song. Like Broadway they’re all “just fine” and no one rapper has a punchline or metaphor clever enough to stand out.

“I’ma rip this up like a bad contract” is an example of how “clever” they get. Arguably that’s what Mad Kap should have done. Loud Records and their parent/distributor RCA were loaded with heavy hitters in the late 80’s and early 90’s (see also Jive/Zomba under the RCA distribution umbrella), so Mad Kap didn’t stand a chance of being standouts nationally let alone on their own imprint. For me it’s personally ironic to hear a very clearly Sir Jinx inspired track like “When It Rains It Pours” when fellow California rapper Threat (with actual connections to Ice Cube and Da Lench Mob) did a much better song by the exact same name.

To be fair nothing on “Look Ma Duke, No Hands” is straight up terrible. Here’s what I’d like to imagine — at some point a demo tape crossed the desk of an A&R at Loud/RCA when they were looking to expand their roster and a label executive came to said A&R to ask “Who can we sign?” He looked at the bin full of tapes he hadn’t thrown away, picked up Mad Kap, and said “I didn’t hate this. Sign them.” That’s this group in a nutshell. They’re the afterthought signed to a label just so they could have more people under contract, who made the cut not by virtue of being great, but simply by not being completely terrible. They’re like the .250 hitter on a major league team who is entirely expendable but sticks around because he’s just good enough and everybody in the clubhouse likes the positive energy he brings. Mad Kap won’t insult you with awfulness OR inspire you with greatness.