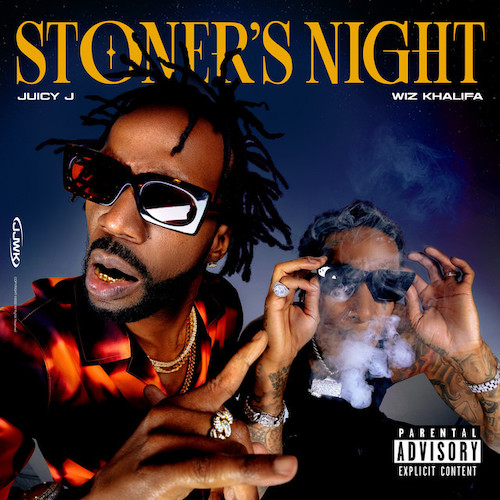 It probably would have been more appropriate to review “Stoner’s Night” on April 20th, but better late than never.

I don’t think there’s ever been any doubt that Wiz Khalifa and Juicy J like to smoke. Individually they’ve probably rolled as many blunts as B-Real or Redman, and collectively they could have exceeded either one. You wouldn’t be surprised to following a tour bus for these men and see a cloud of smoke coming from it. As Wiz Khalifa says “If it ain’t in a joint, I don’t burn it” and “Got a pound the other day, smoked the whole pack.” It’s not just a habit on songs like “Why Do I Stay High,” it’s a lifestyle. They haven’t met a bong they wouldn’t hit or a hotbox they wouldn’t make. Edibles? ‘Til their belly’s full. They’ve got more red eyes than a frequent flier.

On (rolling) paper it might seem like a strange collaboration. Juicy J is a Memphis rapper who first got famous with Three 6 Mafia. Khalifa gained his first fame for the song “Black and Yellow,” a tribute to his hometown of Pittsburgh. You might wonder what Bluff City and Steel City have in common or why these two men would join forces. The single “Weak” is trying to show you one reason other than their love of weed, and that’s their hatred of those who don’t hustle as hard as they do. “When I say weak ass, you say bitch/weak ass (bitch!), weak ass (bitch!)” Khalifa makes it clear the haters are just mad because “they can’t fuck with us” while J makes it how he handles the weak in Memphis: “Momma cryin, fuck the laws/call the morgue/It’s real in my city, it’s like World War III.”

If that wasn’t blunt enough (pun intended) they also dropped a single called “Pop That Trunk.” You don’t want Juicy to feel like he needs to go in the trunk for anything other than his weed stash, aight? Be cool.

To be honest though if I want to hear Juicy J rap about how real shit is in Memphis, I’d just as soon listen to one of his many solo albums or a classic Mafia release. A collaborative album shouldn’t make Wiz Khalifa sound like he’s a long lost Memphis cousin or this is a Hypnotize Minds experiment that leaked out of their vault, but that’s exactly what happens when Project Pat shows up for “Backseat.” Even though Wiz goes first and hits the beat hard with his flow, there’s no doubt when Patrick does his trademark “brickah/sickah/likkah” bars what you’re listening to. Trippy Music may only exist for the purpose of this joint venture, but I’d be surprised if it wasn’t based out of Tennessee.

The good news is that making Wiz Khalifa sound like a member of Three 6 Mafia works. He’s an admitted fan of the group from way back, and even though this is his first official album with Juicy J, it’s far from the first time either one has recorded music with the other. Guest appearances, remixes, cameos and collaborations go way back for these two men, so Wiz x Juicy was just a natural extension of the vibe they had already built with each other. If you’re a fan of either man individually or the Memphis rap sound specifically “Stoner’s Night” will fit right into your current playlist. I think I might have enjoyed it a little more with less posturing and more weed smoking, but it’s not a bad album — it’s just a typical Mafia style album. I don’t think Juicy J will ever be able to get away from that musically or lyrically and I don’t want nor expect him to either.