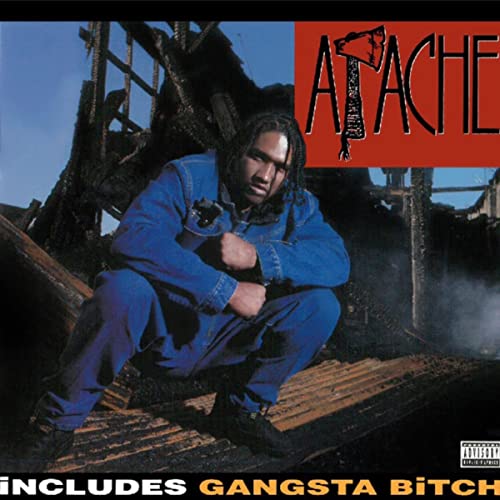 I don’t know if it would be proper to call myself a rap historian. A lot of the key events in hip-hop happened before I heard my first Grandmaster Flash record, and I grew up far removed from the five boroughs of NYC that gave birth to a worldwide phenomenon. There are moments though with albums like “Apache Ain’t Shit” that I feel like someone should say SOMETHING, so that a moment in time in rap isn’t completely forgotten and discarded. It might be a relatively small moment in time in the grand scheme of things, but if there’s one thing I’ve learned from my own studies of history it’s that there are no shortage of people writing down the big stuff — who was king, who was emperor, who won what war. The interesting stuff always ends up being that rare surviving document that records the otherwise forgotten.

It has been over a decade since Anthony Peaks b/k/a Apache passed away. There was an initial outpouring of grief at the time and some people who fondly remembered his Q-Tip produced single “Gangsta Bitch,” but since then there’s been very little discussion of his album “Apache Ain’t Shit.” Did he foreshadow how quickly he’d be forgotten? Not intentionally. I take the title now the same way I did then — it was Apache’s wry self-deprecating sense of humor coming to the forefront. There were a million rappers then and now bragging about how famous and successful they are, but Apache decided to portray himself as a dirty, low down scoundrel not to be trusted for the laughs. “I’m a man without morals so don’t bet me/I’ll fuck my girl’s best friend if she lets me/Better yet don’t let me forget the past/Stick around and get a bone kicked out your ass.”

Peaks developed that distinctive personality as a core member of the Flavor Unit, a crew launched by Mark the 45 King but eventually overseen by Queen Latifah. The family connection would be evident on songs like “Woodchuck” when the posse got on the track — most notably Vinnie and Treach from Naughty By Nature, but Cee, Latee and Double J came through too. So ask yourself: “How much wood could a woodchuck chuck if a woodchuck could chuck wood? (I don’t know!)” It’s not a thinly veiled metaphor for penis prowess — it’s out there in the open for all to see.

It’s that same “fuck that let’s be blunt” attitude that got Apache some heat for “Apache Ain’t Shit,” particularly songs like “A Fight” and the accompanying interlude “Kill D’White People.” He was seen as stoking racial divisions and possibly even encouraging violence, but quite frankly I don’t see it. The interlude was clearly tongue in cheek, wishing death upon white people but saying “buy my record first.” It made me laugh and so did “A Fight,” because it’s a role reversal of an ugly schoolyard chant, where “pin the tail on the honkey” is the rule and if Apache doesn’t win the brawl “we all jump in.” It’s a clear indication that Peaks rolls deep with or without the Flavor Unit, so you pick a fight with him at your own peril. The “More Peas” sample is the same one heard in many classic rap songs of the 90’s — “Fudge Pudge” by Organized Konfusion, “Soul Clap” by Showbiz & A.G., and even “Uptown Anthem” by the aforementioned Naughty By Nature. It fits right in.

What may hurt Apache the most is that his debut on Tommy Boy Records turned out to be his one and only album. I don’t know what caused him to fail to record a follow up, but according to the Unit’s Lakim Shabazz, the success of “Gangsta Bitch” led to Peaks drinking, eating and partying too much. I don’t dispute his account but I do wonder if depression wasn’t a contributing factor to Apache indulging in excess. People self-medicate in a lot of different ways when they aren’t feeling right, and I know all about that from personal experience. Given how many good friends he had in the Flavor Unit, I wish one of them could have intervened and helped him with whatever was bothering him — or at least recommended some counseling.

Ultimately even if Apache is only known for one album, “Apache Ain’t Shit,” and the song “Gangsta Bitch” in particular, there’s a whole lot more to Mr. Peaks than that. He was a ghost writer behind the scenes for many members of the Flavor Unit, and for at least one release he got to step to the forefront and show the world that he could be a star too. If I can serve one purpose here it’s to at least point out that he was more than the one hit wonder he’s been summarized as in the years since his passing.