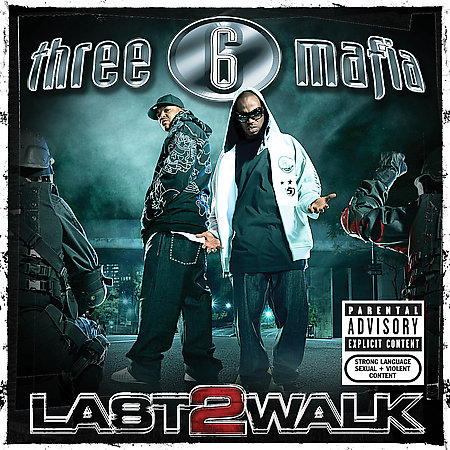 Right off the bat I have to give Three 6 Mafia credit where it’s due. In a previous review this writer experienced technical difficulties with the DualDisc format, an attempt by the group to put both audio and video on one album. On “Last 2 Walk” the group has rectified this error and packaged their new CD with a separate DVD featuring videos for “Lolli Lolli (Pop That Body) and “I’d Rather” along with some bonus footage. In an surprising move they’re also offering a “CD only” version for a couple of dollars less. That may please a lot of penny-penching fans in a slumping economy, but the cardboard sleeve on the CD & DVD combo is pretty skinny as is, leaving the one disc edition feeling like a CD single. There are valid reasons for not having a gem case – less expensive to manufacture, better for the environment and so on – but it still makes the end product seem flimsy and cheap compared to everything next to it in the rack at the store.

As for the album itself the title “Last 2 Walk” is a reflection of the fact that the group has been pared down to core members DJ Paul and Juicy J, who serve as both rappers and producers throughout. This is a great move for a multitude of reasons, not the least of which is the fact the Mafia were never a lyrically sophisticated group to begin with. Every hit for the group to date whether crossover or underground has largely been driven by the beats, with the rhymes being at best an afterthought and at worst nauseating. Furthermore the sometimes bloated group lineup made it hard for any member to stand out, and while Paul and J may not pen The Iliad any time soon their distinctive vocal delivery serves them well and makes them stand out from their peers. Last but not least is the fact the smaller group size leaves the doorWIDE OPEN for guest appearances by other artists, and the Mafia were not shy about loading up “Last 2 Walk” with big names. Collaborations with their friends Lil’ Wyte and Project Pat were to be expected, as well as guest singers like Akon on “That’s Right” and Lyfe Jennings on “Hood Star.” Most cameos keep the group’s sound close to their Southern roots, which will no doubt please their loyal fans almost as much as THEY are being pleased (orally) on “I’d Rather” featuring Unk.

“I’m the one that supply that D
I’m the one that keep freaks with me
I’m the one that be ridin clean
that be on the scene with that Texas tea
I’m the dude that took yo’ girl
I’m the fool that changed the world
I’m the mayne with the twelve inches
she love to lick and it made her earl
Always fresh when I’m at the club
Sippin Goose the plan keep a buzz
From the hood so I throw it up
and the other side they don’t mess with us
Love a girl that do it right
Make my toes like curly fries
In the bathroom or in the car
or behind the bar she dy-no-mite!”

Sex is a persistent topic for the group as evidenced by the currently charting “Lolli Lolli (Pop That Body).” Curiously it appears this song almost DIDN’T make the cut, as the Mafia list this song as a “Bonus Track.” The cynical might suggest Three 6 recorded this song right before the album went to press just to capitalize on the success of Lil Wayne’s “Lollipop,” but we all know the review staff here are NEVER cynical about the music industry (#4,080). Project Pat guest stars on the track.

Pat: “All my ladies with a body, put yo’ hands in the URR
Youse a good lookin hottie, put yo’ hands in the URR
Project Pat, lookin for a model, poppin that booty, I’ma pop bottles
Your girl’s a cutie, know she gargles, don’t get me wrong, I keep them hollows
Shorty hot, watch her rock, let me see that lolli pop
Body rock, don’t you stop, I love the way that booty drop
Sideways, front back, up and down I like that
Cherry lolli, chocolate lolli, I wanna see you pop that lolli”

Sampling is taken to new levels on the amped up “I Got,” which loops the Zombie Nation song “Kernkraft 400,” which IN TURN sampled from the Commodore 64 game “Lazy Jones.” It’s hard to argue with the fact that it works musically, particularly given the late great Pimp C provides the song’s hook. The lyrics… well that’s another matter altogether.

“The Don Dada, is what they call me overseas
But over here I should say I’m the king of Memphis, Tennessee
Rap, is a wrap, haters wrapped off in my duct tape
What it take I say I been hard since first mixtape
Face get your G’s up, way way up to my level
Higher than the clouds where my daddy restes in heaven
But on another note I’m so stylish I changed the name
I surpassed clean, like a baby, I’m clayn clayn”

Hearing “duct tape” rhymed with “mixtape” is ALMOST as bad as hearing Shaquille O’Neal rhyme “me” with “me” and “billion” with “billion” when asking Kobe Bryant how his ass tastes (eww). I mean no disrespect to the dearly departed either but daddy would be ashamed of his son for saying he “restes” in heaven or for attempting to rhyme “name” and “clean” by changing the pronunciation of the latter. No sir, I don’t like it. Quite simply Three 6 Mafia are no good lyrically and they never have been, but I’m okay with that. Their stature has risen of late just given the recent rap rejects rhyming on records, meaning they are no longer the bottom of the totem pole as MC’s. Since production has always been their strength and has only gotten better in recent years there’s plenty to like on “Last 2 Walk.” The song “Trap Boom” is appropriately named and crunk sounding. “Playstation” is a poor metaphor conceptually but has an addictive combo of low bass, fast beats and high-pitched bell ringing melody. “Weed, Blow, Pills” summarizes their sound nicely, intentionally chopping and screwing their own vocals and throwing some catchy scratches into the hook. “On Some Chrome” features UGK, marking the second track Pimp C guests on, and it may bring a tear to an eye or two to hear “Pocket Full of Stones” blended into the mix. Nothing comes as a bigger surprise though than GOOD CHARLOTTE hooking up with the Mafia to perform on “My Own Way.” Whether you love or hate them as rappers, you have to give it up to Three 6 Mafia for their creativity musically and the strength of their production. “Last 2 Walk” is recommended for those who can get past their banal lyricism, because between the beats and the guest stars on this album they’ve got a winning combination anyway.