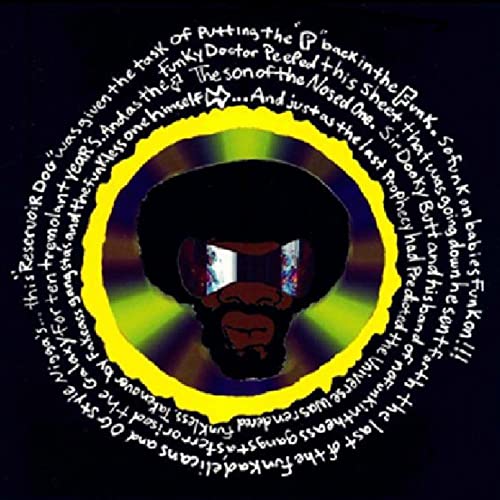 It’s hard to justify my affection for Schoolly D when listening to albums like “Reservoir Dog.” In the past I’ve written about the fact he’s a gangster rap legend, considered by some to be the progenitor of the genre as a whole, though there are other rappers from the 1980’s equally worthy of the title. His reputation nevertheless carried him through the 80’s and into the 90’s, where his music ended up prominently featured in several Abel Ferrara films, further cementing his legacy as an O.G. in hip-hop. It’s rather odd then that this album title references a Quentin Tarantino flick instead, although it’s certainly one worth seeing if you haven’t already.

The problems are evident right from the title track. It’s a thinly veiled update of his pioneering gangster rap hit “P.S.K.” The song is structured the same way, the verses are delivered the same way, and even the scratching seems to imitate what Code Money did on Schoolly D’s first hit. What’s missing is the cool drum pattern that made “P.S.K.” stand out, and the choice to loop a sample from a scratchy record doesn’t evoke the warm nostalgic feel everybody involved was hoping for. Perhaps if it was only scratchy that would be fine, but instead the record audible POPS on a large spec of dust, and if you’re listening to this on anything good that quickly gets irritating.

The cover art and songs like “Ghettofunkstylistic” feel like an attempt to rebrand Schoolly D as a member of the P-Funk All Stars, but the self-produced D beat lacks the punch of even the most obscure Parliament or Funkadelic tracks. D himself feels unenthusiastic about the whole thing, going through the motions with his verses, barely raising his voice above an audible whisper. “My girl say ‘Yo nigga where you goin?’/Don’t worry baby doll I ain’t goin out/Homey just goin to the neighborhood liquor sto’/Know soon as I hit the front do’/1-2-3, yo who do I see?/Fo’ crackheads looking back at me.” That’s the other problem for D — he’s barely trying to flow, rhyme, or even say anything interesting. He’s phoning this one in.

“Schoolly D Live!” might be the song that bothers me the most. On paper hearing him perform “Saturday Night” live is exactly the energy this lifeless album needed, but something about the “audience” here feels incredibly phony. A real crowd doesn’t necessarily respond to every single second of a rapper’s performance, they just pop for the big moments, and the fact they continue to murmur in the background during the beatboxing makes it sound like the entire thing was done in a recording booth with some extra echo added to D’s voice to make it SEEM like a live performance. It’s whack.

Schoolly D repeats the phrase “forever is a long time” over and over again on “Eternity” and man did he nail it on that score. The unnamed guest star pretends to be a vampire and says things like “I’m the nigga who likes to suck blood,” which is mildly interesting for a minute or so. The beat tries to sound like it’s dripping liquid but the bass and instrumental aren’t creepy or disturbing enough to carry the vibe they’re shooting for. In summary “Reservoir Dog” is Schoolly D’s seventh album, released in 1995, referring to a movie that was a hit three years earlier and a career that was a hit a whole decade earlier. This album is a Xerox of a Xerox of a Xerox. Here’s an important question to ask — would you ever want to hear Schoolly D perform even a single song from this release live? If the answer is no, why the fuck did he even record them then?