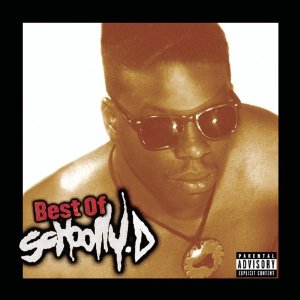 Unquestionably, this purchase was motivated by a recent trip to Philadelphia. While browsing through a Tower Records store in King of Prussia (and unsuccessfully trying to find the Little Brother album) I came across this “Greatest Hits” compilation sale priced at $11.99. What could be more appropriate than purchasing a Schoolly D album while visiting the Philadelphia area? As much as DJ Jazzy Jeff & the Fresh Prince, 3 Times Dope or Cash Money & Marvelous, Schoolly School epitomized Philly hip-hop in the golden age of the mid to late 1980’s. What seperates Schoolly D from the rest of this pack is that the rapper is often singled out as a forefather of gangster rap. The debate about who recorded the genre’s first and definining record may never be settled, but way before Ice-T or N.W.A. were national sensations D had already released such seminal songs as “P.S.K. – What Does it Mean?” in 1985. D’s song offered a definition of those initials for everyone who kept asking:

“P.S.K., we’re makin that green
People always say, ‘What the hell does that mean?’
P for the people who can’t understand
How one homeboy became a man
S for the way you scream and shout
One by one I’m knockin you out
K for the way my DJ kuttin
Other MC’s, man you ain’t sayin nuttin
Rockin on to the, break of dawn
I thank Code Money everytime it’s on”

The know-nots may have accepted this explanation, but the lyrics of the song revealed a far more blunt tale of sex and violence (“I finally realized the girl was a whore, gave her ten dollars she asked me for some more”) that contradicts the more easily palatable definition. Philadelphians knew better – it was the initials for Park Side Killers, a gang which D at one time belonged to. Trading the life of crime for the life of rhyme, D brought his no nonsense brand of narrative which combined the raunchy style of Too $hort and hardcore attitude of KRS-One into one potent package. Ironically, all three artists were on Jive Records at one time, back when the label could claim to be a powerhouse of hip-hop music.

These days, with Jive’s faltering support for rap artists and unwillingness to promote the few they have left, the label has little choice but to resort to greatest hits compilations such as this. In fact, this album was previously released as “The Jive Collection, Volume 3” in 1995. The tracks to be found on this CD are exactly the same, but now the album more accurately credits Schoolly D as it’s star and may as such breathe more life into it’s selection of tracks.

Schoolly D fans will definitely be pleased with the twelve song compilation found on this CD, including the aforementioned “P.S.K.” and other old school classics like “Gucci Time” and “Smoke Some Kill.” My personal favorite is “Saturday Night” from the album of the same name. The beat is a selection of cowbell type clangs of varying pitches, matched with a simple drum track, scratching by Code Money, and repeated guitar licks in the background. Like many 1980’s rap classics, the beauty of the arrangement lies in it’s simple perfection and the fact that it’s understated presentation left the rapper in the forefront to construct the song. Even those who haven’t heard the song in it’s entirety have undoubtedly heard samples from it, because D confesses his predeliction for enhancing his Saturday nights herbally:

One might have ascertained by this point that Schoolly D revelled in combining the serious with the silly, and they would be right – or as he puts it, “Only Schoolly D would make some crazy ass shit like this.” But make no mistake, when D wants to lay some smack down, your better watch your behind. “Fat Gold Chain” unapolgetically gave it up to the bling bling way before it was commercial or trendy, and made it clear that fat record deals weren’t what paid for the floss and gloss – street hustling did:

“Jumpin out my Lincoln, you know it’s stinkin
You wanna rush me keep on thinkin
Cause in my ride, I do not hide
I keep a thirty-eight, a-by my side
You wanna rush it, sell it for a blast
I see you later, I’m kickin your ass!
My gold chain gettin fatter and fatter
Another fat J then it really don’t matter”

This rap also highlights the reason why Schoolly D was for the most part unable to successfully transition into the 1990’s. If the background of simple drum beats that made his raps so powerful and provacative weren’t already going out of style, the simple style of his raps definitely was. In a surprising swerve, D tried to switch to the strong popularity of Afrocentric and political rhymes with his album “Am I Black Enough for You,” from which the song “Livin’ in the Jungle” is culled:

“Straight from the ave, takin over like Rover
Don’t dig what I’m sayin then roll the fuck over
Cold and bold, so you’ve been told
Call me on the phone, tell me I went gold
I don’t understand my man, we need a plan
Why I gotta walk with a gun in my hand?
And lookin for a fight to incite, or a rumble
Don’t know why – cause I’m livin in the jungle”

While Schoolly D’s raps kept their same level of A to B rhyme patterns and simple organization they had used all along, they also kept the same hardcore style that unlike labelmate KRS-One did not transition well from hustler to philsopher; not to mention that KRS had been at the forefront of the trend and D was catching the bandwagon at the tail end. His career with Jive ended here and the rest of his catalogue from ’91 on had varying highs and lows on a smattering of different labels, but few songs had the potency of his early days when he could simply call a song “Mr. Big Dick” and have a big underground hit:

“It seems there’s some fuckers who don’t recognize
That Mr. Big Dick is always on the rise
To look at mine, you need four eyes
Why? Because of the size!
Me and Mr. Big Dick go everywhere together
In the cold, the hot, any weather
[…]
All you girls, with the big booties
It is my duty, to fuck you cutie
Don’t be shy, and don’t get slick
Just ask the big question – MR. BIG DICK!
(YEAHH?) WHO DO YOU THINK YOU ARE?”

While today’s generation of Philadelphia artists like Beanie Sigel and The Roots give nuff props to his pioneering raps, it’s also clear that musically and lyrically they’ve moved far beyond where he once was (and still is). If you appreciate the finer points of old school rap though, “The Best of Schoolly D” is not only a worthwhile compilation, but easily the best selection of his songs available.