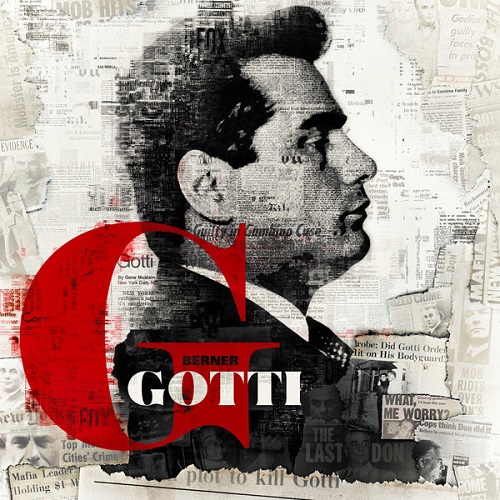 As far as crime references go, John Gotti is positively old school. Not to mention deep-sixed for two decades. Rap folk have adopted his last name again and again, at least a dozen of ’em. When the subject of worship was still alive, Shawn Carter drove the lyrical tribute to the extreme with the notorious “Never prayed to God, I prayed to Gotti”.

So what can Bay Area rap and hemp entrepreneur Berner get out of Gotti besides inspiration for an album’s name and artwork (and original soundbites for short interludes)? Overall it’s business as usual for Berner, who first emerged in the mid-’00s and has since racked up a sprawling, highly connected discography. Unlike the showy Dapper Don, Berner is a low-key G, going through his songs with the same timbre and volume as if he was speaking from a dusky salon peering through the sun-blinds recalling dealings he undertakes under cover of darkness. The restrained vocals give his music a circumspect air.

Given the monotony of Berner’s delivery, collaborators are key. Without being familiar with every joint effort, we’ll wager a guess that Berner benefitted from co-billing the likes of The Jacka, B-Real, Styles P, Cam’ron, Mozzy, Messy Marv or Young Dolph in the past. The trained eye will immediately detect this album’s big name features. Undeniably one of the biggest names on urban music’s marquee of the last 10 years, Future joins Bern for opener “Draped Up” to set things off appropriately.

Channelling DJ Khaled, he puts Rick Ross, Nas and Jadakiss on the same track. Its title “Too Many Goats” reads more like an online commentary while Kevin Cossom’s hook suggest the song might actually be called ‘Living the Life’. Although the host lacks the creativity of his guests, there is a realistic touch to his rhymes that superstar rappers may lose over time. “Convos with Harry-O / I just sat down with the government in Ontario / They’re my biggest client now / Load up cargo planes and they fly ’em out”, he offers while a certain 25-year veteran still has trouble pronouncing Cosa Nostra correctly…

The other highly reinforced track is “Pound for Pound” featuring Jadakiss’ D-Block brethren Styles P, Sacramento’s finest Mozzy and Griselda’s Conway and Benny. Understated minor-key guitar strumming gives them all ample room to flex, resulting in an album highlight, a throwback to when posse cuts were a key event of hip-hop music.

In regards to his basic configuration, Berner is a standard street rapper who has gone legit but still sees himself operating with the same hustler mentality. Because it benefits their image, such genre rappers are intentionally ambiguous about the degrees of their involvement in illicit activities. When Berner rhymes, “You’re small time, why you tellin’ on yourself online? / Like you won’t end up in the box doin’ hard time”, those could be stern words of advice or it could be Bern’s competitive mind speaking.

Organized crime has been evoked in rap music since at least Pomona’s Above The Law, and “Gotti” contains its share of underworld flashes like “Silence” and “Running Numbers” that say nothing new in a field where arguably almost anything has already been said. The boasts indeed carry more relevance when the Cookies CEO and co-founder pulls an Elon Musk and claims, “It’s funny how I can change a whole market with a post” (“Obstacles”). We don’t buy wholesale into images but there is something to the notion that Berner passes on real game. A lost art, to be honest.

Twitter clout worked into rap boasts aside, it shows that Berner has recorded and released hundreds of songs by now. Songs that are composed of suitable music and moods, choruses and verses. Five producers and singer Rod Wave line up to provide “Lonely at the Top” with pop appeal, but more importantly the outcome is a consistent tune, a quality also found in the career/come-up musings of “Next Level”, the own spin on true crime, “1st 48” (although ‘America’s Dumbest Criminals’ would also be a fitting title), the (quite trite) self-congratulatory “Legacy”, or “Bucket List”, which takes on added significance as Berner is fighting colon cancer at the time of writing.

Completing a mob-inspired trilogy (of sorts) after “Russ Bufalino: The Quiet Don” and “Paulie Sicero”, Berner continues in his lane with “Gotti” with standard subject matter, solid rhyming craft and music that isn’t always the freshest but occupies an agreeable sonic spectrum between beats with added sweeteners and relaxing/meditative soundscapes. Part of the latter: the supremely chilled “Zoning” with singer Ryn Nicole that also inlcudes the following line that sums up Bern’s imperturbable attitude: “I smoke too good to have a bad dream”. But before he gets too crazy with the wordplay, Bern is back to overstating the obvious with Wiz Khalifa on “Big Chain”.

As his late 2021 release features a fancy rendition of John Gotti on its cover, Berner himself has become a literal poster boy for the legal/medical marijuana business, making the August 2022 cover of Forbes (‘Marijuana Meltdown’/’$150 Million Cannabis King Berner’). Making him, according to an insider publication, ‘the first representative of the cannabis industry to appear on the cover of Forbes magazine’.

Given such accolades and achievements, it seems unnecessary for Berner the rap artist to lyrically dip into some criminal past, but as we have hinted at, just perhaps there is a little bit more rhyme and reason to a Berner song – not necessarily in the sense of being ‘realistic’ because we know rappers much younger than Berner have sometimes been too realistic for their own good. But there’s a difference between blurting out random boasts or threats and chronicling actual achievements. Somewhere on “Gotti” Berner already mentions “another cover story on me by Forbes”. Chances are, he refers to past reporting that made him the main subject (which is impressive enough), but the fact that the real cover story did materialize in such a short time is evidence of Berner’s goal orientation.