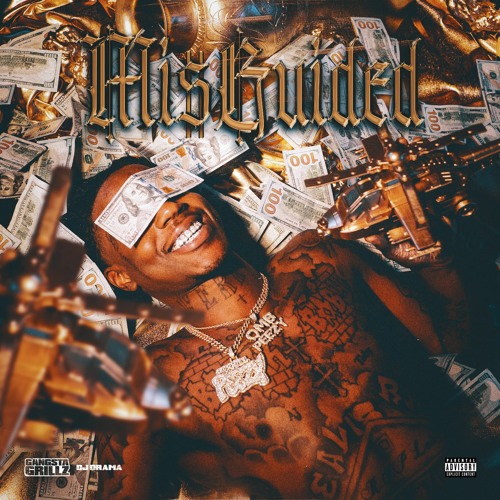 “How he gon’ rap about this shit and he don’t know about it?”

Officially the new OMB Peezy album “Misguided” is a mixtape with DJ Drama, but for nearly 20 years now major artists have dropped Drama releases that feel like studio albums. Mixtapes used to be compilations of hot songs selected for you by a top deejay, or a promotional vehicle given away by a rapper filled with freestyles over other people’s songs. These days mixtapes and albums are interchangeable. You can buy or stream either one. Both are filled with original new music. The only real difference here is Drama interjecting shoutouts to OMB Peezy and making jokes about his haters. “I’m the deejay that’s all in the videos, all on the records, (and) if you don’t like it, take your ass to Death Row!”

Last time I looked at Peezy’s music he had just made headlines in Atlanta for firing shots at the filming of a Roddy Ricch and 42 Dugg music video. Three people were injured but thankfully there were no fatalities. The already overextended legal system slowed to an inexorable crawl thanks to the global pandemic, with any case I’ve even tried to follow having every hearing and court date postponed over and over again. All I can say for sure is that Peezy was arrested on suspicion of being the shooter, and given that he’s still recording and releasing music he’s either (A.) out on bail or (B.) accepted a plea with no jail time and supervised probation. If it’s the latter it would explain why I haven’t heard about any more drama for Peezy (pun intended) as he’s kept a relatively low profile ever since.

Low pro legally should not be mistaken for low pro musically. “Mufasa” with G Herbo shows he’s still filming music videos and collaborating with whoever he likes. The single has a shopping list full of producers — Bankroll Got It, Chambers, Ljay Currie, Hitmaka and Diego Ave — but the only one who gets a repeated shoutout on the track is Bankroll so he’s clearly the chief architect. It might be seen as a backhanded compliment to say “this is the average AutoTune x drill rap collaboration” but I don’t hate the beat or the sing-song delivery. It’s an easy song to bop your head to even if the lyrics don’t really spark any feelings one way or another.

“She gon’ wonder why I ain’t text her
I been busy runnin them racks up
My life a movie but I ain’t a actor
Try me, I’ma shoot like a director”

The verbiage proves he’s not running away from gunplay raps despite his real world problems. For OMB Peezy consistency is paramount to keeping the fans he already made and attracting new ones. If you’re known for your “keep it real” persona and for saying other rappers talk about what they don’t know about, it probably doesn’t hurt at all to be facing charges for shooting a gun at people. Ironically (and sadly) it probably helps your credibility. The implications are all over “Let That Happen (Wild Life)” with or without the music video, but the video makes it clear he’s embraced the idea of having a problem solver when his foes have no revolver. “His Glock ain’t work when he need to perform.”

And in case there’s any doubt about how OMB Peezy is positioning himself compared to his contemporaries, “Real Shit” featuring Morray should erase it completely. Even though tuning their vocals results in blurring the lines more than the distinction between albums and mixtapes, the large and in charge Morray still managed to catch my attention with his straight forward no nonsense lyrics. “Everything ain’t good as it seems is what I’m sayin/love ain’t free nowadays, you gotta pay.” The production by Lifted is nice too.

“Misguided” leaves me with mixed feelings. I have no issues with DJ Drama promoting himself here. He neither adds to the music nor takes anything away from it, and is certainly less obnoxious about shouting out his name or catchphrase compared to some deejays. I have no problem with OMB Peezy maintaining the style that brought him to the dance in the first place. He neither improved as a lyricist nor deteriorated into ridiculous self-parody. The music is absolutely fine from start to finish. Nothing made me want to turn the album off or skip ahead instead of going in sequence. It’s time to close this review on another backhanded compliment — everything here is fine. It’s not a classic, but it doesn’t suck. Peezy is not the savior of the youth nor the man to rewrite rap for a new generation, but he’s very adamant in his lyrics he’s not trying to be either, so I’ll take him exactly as he is — an entertainer with a few legal issues.